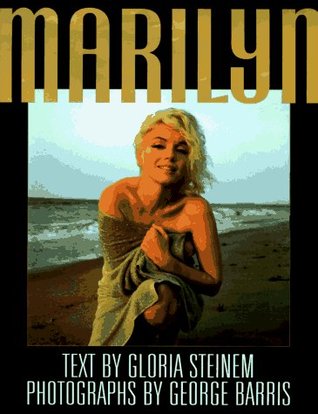 In this sensitive, provocative portrait of Marilyn Monroe, Gloria Steinem reveals the woman behind the myth--the child Norma Jean--and the forces in America that shaped her into the fantasy and icon that has never died. 16 pages of full-color photos.

In this sensitive, provocative portrait of Marilyn Monroe, Gloria Steinem reveals the woman behind the myth--the child Norma Jean--and the forces in America that shaped her into the fantasy and icon that has never died. 16 pages of full-color photos.

Rarely do I come across a book that allows itself to be read with such freedom from all cynicism, skepticism, irony, or struggle. In fact, I first came across this book when it first came out--when I was six years old--and my mother had it on her bookshelf in the living room. She caught me sitting behind an armchair, looking at the pictures. I remember being frightened by these late-era photographs of Marilyn: freckled and age-spotted, eyes half-mast, champagne in hand, bruised and heavily made-up and mostly naked, smiling. This was the first time I remember hearing someone (my mom) describe such a glamorous woman as "sad."

From the moment I opened this book again I was all opened up: eyes wide, mouth gaping, mind expanded, heart entirely rent. In such a short book--concise text kept to perfect brevity, several pages devoted entirely to just glossy photos--Steinem manages to reveal Marilyn with such clear ringing feminist honesty and kindness and compassion that I wept on several occasions. It wasn't just pity for child-woman Marilyn, abandoned and abused Norma Jeane, or even for womankind in all our messy loveliness and pain, but even just for the sheer joy of learning, of being lovingly taught. I recommend this book to everyone.

My View:
This was a very sad and poignant read – Steinem writes a very empathetic story about the life and death of this tortured and fragile individual and reveals more about Marilyn Monroe stage name of Norma Jeane) than we are usually presented with, more than mere gloss, Hollywood hype and cheesecake photo shoots; Steinem reveals the ghosts of Norma Jeane’s past that so critically affect the adult Marilyn Monroe.

Norma Jeane had a tragic and emotion deprived childhood – she grew up in a series of babysitters and relatives homes, often only seeing her mentally unstable mother on weekends. When her mother was hospitalized Norma Jeane continued to flit from home to home, from relative to relative to family friends, foster care and an orphanage (where Marilyn alleges she was sexually assaulted at the age of 8). She later lived with a distant relative – an aunt who encouraged the teenage Norma Jeane to marry the boy next door (for security and protection). Norma Jeane was just sixteen. The adult Marilyn continued to look for happiness, security, love and approval in her many marriages.

Steinem’s account of Marilyn Monroe’s life is one that shows talent, promise, intellect, neediness and insecurity; a complex individual largely a victim of her unstable upbringing and the social mores of the time that defined women as mere homemakers, sexual objects, and dependant. I was surprised to hear of Marilyn’s political voice, her activism – writing letters to the editor, using her fame to influence decision makers, “she told us of her strong feelings about civil rights, for black equality.....her anger a red baiting.... ( p.72) Steinem shows us a Marilyn that is not obvious in the public persona, the actress whose roles largely related to the one dimensional “dumb blonde”.

I enjoyed learning that there was more to Marilyn than was obvious or that was portrayed in the media. Steinem has cleverly created a narrative that allows the reader to step back in time to see the world through Marilyn’s eyes.

Despite the fact that Marilyn Monroe died fifty one years ago her name and image remain fresh in our minds. Marilyn’s life made an impact on Hollywood and popular culture and the manner and timing of her death, whether accidental or murder or suicide, will intrigue the media hungry public forever (or until a suicide note is made public or a conspiracy plot is revealed). Steinem suggests (p. 96) that after Marilyn’s death it is “likely that Peter Lawford employed a private detective to sweep the house... and to destroy any evidence embarrassing to the Kennedys, including a suicide note or unfinished letter.” The intrigue and mystery lives on, the legend of Marilyn Monroe, screen goddess, still very much alive.

I can't help but be fascinated with Marilyn Monroe. It is hard to find anything about her that isn't from the point of view of others or just complete speculation. This book was written around Marilyn Monroe own words taken from her last interview and from an unfinished autobiography she had started to write shortly before her death. There was still opinion and many wonders about MM, her life and habits, but the author never inserted her own conclusions. It was sad to hear the story of how a talented but lonely woman who desired nothing more than love and respect, the respect part especially hard to come by for a woman during her time, die so suddenly and at a time where it seemed she was ready to take control of her life and move forward to a happy future.
A recommend read for a true Marilyn fan or one who is curious to find out more about the mysterious life and death of one of Hollywood's most dynamic sex symbols.

Amazing woman and well written biography by Steinem. She showed us all aspects of Marilyn's life, creating a full illustration of who she was as a woman and why she remains an icon. She asks the right questions and it is so intelligently written and articulated that I fell in love with Marilyn, being one who never had an interest in her before. I never disliked her, I simply had little opinion, despite being an obsessed fan of classic films and old Hollywood. Marilyn's complexity and wisdom is shown with the quotes and I think that if she read this book, Marilyn, would have been able to heal and be the woman she wished she could be. Amazing book on many levels. I can't say enough about it.

A riveting read that deconstructs the life of this yesteryear actor, icon of Hollywood glamour, and of course, sex symbol, for more than who she was on screen, without the page3 sensationalisation. Written with a feminist sensibility+sensitivity and a sharp sense of critique for the male gaze that lorded over Monroe's narrative for most of her life and for many years even after her death (this book was only published in the mid-1980s, a little over a couple of decades after Monroe's death).

This book delves in the psychology of childhood emotional neglect as well as the possibility of Monroe's struggle with endometriosis and many illegal abortions - goes to show how ravaged non-cis-masc bodies are by the neglect of mainstream medical research.

Such a wholesome book on a person that one can imagine was a wholesome woman, rarely known, but recklessly perceived. By the male gaze.

As a teenager, I loved watching her movies and was quite surprised at her impeccable comic timing. I really do wonder what sort of performances Monroe would have delivered if she were to be alive today, especially after watching Lori Loughlin and Jane Fonda produce Grace & Frankie.

I was born way after Marilyn passed away, and I've never been super into her mythos or legend. So, I saw this as an opportunity to try and understand all the stories that circled around her, her story itself and what she may have gone through. I wanted to understand why this woman had captivated people.

I feel like this book gave me all that information and more. I now feel like I can see the pain in Marilyn's eye emanating from pictures. It was also very interesting to see her story through the lens of sexual politics. I learned so much. And to see how much being neglected impacted her.

I definitely won't stop here for Marilyn perspectives, but I feel like this was an excellent place to start.

If I had any complaints they would be that I wish this book had been arranged chronologically. Instead, its more arranged by topic.

By the end of the book though, the pictures are poignant and heart breaking. I wish Marilyn had treated herself better.

Very interesting read about feminist theory coupled with the psychological effects of childhood abandonment in one of America's most iconic popular cultural icons. And her daily struggle for acceptance and love.

Gloria Steinem does what many other biographers have failed to do and broken down the myth of Marilyn, largely by tracking down and using Marilyn's own words. I finally feel like Marilyn was a real person.

Steinem's biography paints a Marilyn unknown to most of us today, a woman abandoned as a child who unsuccessfully tried to fill that emptiness as an adult. Throughout the book you find yourself wanting to wrap Monroe in your arms and tell her everything is going to be alright.

Beautiful collection of photos. I bought this book at one of my favorite bookstores, the Mesa Bookshop. The bookstore has since moved to Main Street in Mesa but I still go there often. One of the best places to find 1st editions and hard-bound editions in excellent condition. Anyway this book contains many photos of Marilyn from her early to mid thirties when she was at her most beautiful. I especially like the photos of her in her sherbet orange outfits. There is a very sad expression in her eyes in these photos that a person at her age really ought not to have...