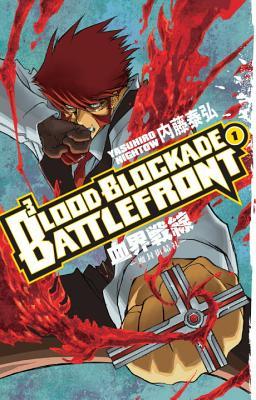 Darkly funny story, and characters in a unique setting. The world is well drawn, and the plot develops nicely. I like this as much as I am liking the anime.

It's probably not a surprise to anyone who knows me, but as much as I like the main character my favorite defiantly has to be Zapp.

I want to rate this one higher, but it really didn't catch me the way a first volume should. It assumes too much about the characters that it introduces and expects the reader to identify with the wit and pacing despite the lack of characterization. Even the main character is disappointingly flat and his one emotional outburst doesn't provoke a similar response in the reader. The concept is very interesting: an alternate dimension or world intersects with our own and establishes a community in New York City (now Jerusalem's Lot). I want to know the explanation behind the name change too... Some of the humor was actually amusing, but much of it either wasn't (at least to me) or seemed too much too soon. For one thing, the jump between the first adventure and the second must have been fairly significant, but there is no sign to how long. It just felt very disjointed.

There's quite a bit of violence, though not as much as I expected (with a lot of it occurring off-screen or just out of view). There is a scene where one of the male characters is completely nude but for a strategically placed pizza box... (which was weird and unnecessary in my opinion). There might have been some language, the overall tone was definitely for teenagers at the youngest.

I'm not 100% sold yet, but I'll give the rest of this series a try.
It's different and unique and written by one of my favorite manga writers who also wrote Trigun.

Anyone who's read Yasuhiro Nightow's previous work will immediately find familiar elements to latch onto here, and I don't mean that as a negative thing. The story and characters are still different enough that they don't feel like rips of his previous characters from Trigun and Gungrave.

One negative aspect though is that it does take (much like Trigun did) awhile for things to really get rolling, but once they do, the action doesn't let up.

The story focuses on a young boy named Leo, and we learn very early on that there's more to him than meets the eye (pun totally intended), because he can see things that no one else can see. He's, along with every other current resident of New York, living in a sort of twilight zone between the human world and the Beyond. Three years prior to the beginning of the story, the Beyond mysteriously merged with New York city and created a sort of bubble around it, allowing what are essentially demons to walk alongside humans, but only in that confined space.

So, after a bit of exposition and setup, Leo gets mistaken for someone else and is picked up by a secret organization of good guys called Libra. He's taken back to their base by our badass/comic relief, Zap, and introduced to one of their leaders, named Klaus ... whom Zap immediately proceeds to attack for seemingly no reason, but it backfires and Klaus beats the unholy hell out of him without breaking a sweat. After this, Chain, the first female we've seen from the organization, steps into the room, right on top of Zap, using him like a rug. Here's where we get our first look at the tension between these two characters (which makes for some of the funniest dialogue later in the story). I won't bore you with too much explanation, but shortly after the new characters are introduced, something catastrophic happens and we're shown just how tough the members of Libra are. We also see our first glimpse of of why Klaus is the undisputed leader as he unleashes his Blood Battle Technique on a group of cops trying to take them in.

All-in-all, this was a very good read with well-rounded characters that manages to find the perfect blend of action and comedy. I could go into more detail, but it would just spoil the story, and this story deserves better than that. So, if you're a fan of manga, I highly recommend picking this one up. It's the first thing we've gotten from Nightow since Trigun wrapped up in 2008, and personally, I've been waiting for my Nightow fix since then. Definitely a buy, and I can't wait until the second volume is released in May!

(Also, I'm very well-aware that this is not my best review. The layout is pretty damn sloppy, and there are other flaws I'm sure at least a few of you will notice, but I'm running on about 4 hours of sleep from the past two days, and I'm just too lazy to go back and fix it all, lol. Either way, hope this review was at least a little helpful.)

Blood Blockade Battlefront Volume 1, a trade-paperback collection, by Yasuhiro Nightow is a new mini series from the creator of Trigun. This black and white manga has a publication date of September 14 2011. In this new series, the thin wall between the world we know and the netherworlds has ruptured in New York City, trapping the creatures that have crossed over and the residents already there trapped together inside an impenetrable bubble. When Blood Blockade Battlefront begins, New York City's residents of all natures have been stuck with each other for several years, though as with any closed society not everyone is happy. Creatures from the netherworld want more, and some want to breach that bubble and roam the world at large. While there is a police force, it is generally up to a team of super humans to keep evil plans from working and to keep people safe.

Readers are introduced to this group along with their newest recruit who happens to have something special as the rest of the team, even though he might not be who they bargained for. Leo is young, tenderhearted and has a unique eye for the creatures wandering the street. Leo has a handicapped sister and family on the other side of that bubble, and some guilt related to an incident during a family vacation to look through the fog obscuring the besieged New York City. He is desperate to make money to support his family, and jumps at the chance to join the organization, despite a minor issue of mistaken identity. There are quirky characters, insane creatures, wacky humor and fast action throughout the manga. The artistry is amazing and the story one that I want to follow to the conclusion. Fans of manga, particular the blend of humor and high action found in Trigun and other Nightow works, should add this to their must read list. Those that want to get started in reading manga might want to try Blood Blockade Battlefront, since it shows how fun and exciting this branch of the style can be. Those that do not enjoy manga, or graphic novels in general, are not likely to be swayed to sudden fandom, however it might give the necessary push to those wavering on the brink.

It has been a long time since I last got so excited about an anime that I went to buy the manga, so I was happy to finally get my lovely used copy of the first volume of Blood Blockade Battlefront. Even better, I wasn't disappointed by it. The whole thing has a scattered, random feel to it that I think works in terms of reflecting the bizarre supernatural setting, and though there were scenes where Leonardo, the main character, clearly wasn't making sense of what he saw (there's one odd scene with Klaus in particular), I think it's a really interesting narrative way of conveying the unfamiliarity of the environment.

Coming at this from the anime, I was surprised by two things in this volume. First, I hadn't expected the art to be as detailed as it was. Occasionally, it looks cluttered, but the nightmarish backgrounds are impressively full of odd monsters and casual bits of Americana. It isn't pretty, but it's quite effective. I was also happy to see that here, Chain seems to get a bigger role than she does in the TV adaptation.

I already ordered a copy of volume 2, because I found them used very cheaply, but even if I hadn't, I'd keep up with Blood Blockade Battlefront. It isn't at all tidy, but I think that's the best thing about it.

Yasuhiro Nightow's Trigun was never quite to my liking. It was just something I couldn't get interested in. Bloodline is better, at least for my tastes, as it teases some reveals are due down the road. Most of New York City has been replaced by Jerusalem Lot, the site of where a gateway between Earth and the Beyond opened (we are not told exactly what the beyond is). Leo is our everyman. He relocated to city, in part because of an incident that affected his sister (avoiding spoiler). In the first volume he hooks up with Libra, a group of enhanced individuals who are battling those from Beyond who want to break the barrier between the rest of the world and Jerusalem Lot that the event erected when the breach happened. You're not getting in depth characterization here. A lot of hyper-kinetic action with bare hints about Libra's leader Klaus and two of his agents Zap who and Chain.

Wanted to love it but I found it mostly made me want to reread Trigun.... The similar character designs didn't help and it was kind of hard to tell what was happening in the majority of the action frames. I'll keep reading it since it was getting interesting at the end but... I may put Trigun on my to re-read list first.

EDIT: Volume 2 was a little more interesting... Let's see how 3 is!

EDIT: Volume 3 I got a bored again, which I really don't want to do since it's Nightow! My favorite character is Chain but there's not much character development with her.

Though I admire the ideas and imaginations, Yasuhiro Nightow is never really my favorite mangaka.
The artwork, the chara developments, is just too messy for my type, I guess.

If it wasn't for the anime (which sadly, more messed up and crowded than the manga), I don't think I'd pick Kekkai Sensen.

But, the concept and the setting of the story, though not quite original, have A LOT of potential to become great fantasy manga. Let's just hope it'll get better on the way, 'cause I still want to see moreandmoreandmoreandmoooore Klaus. :p