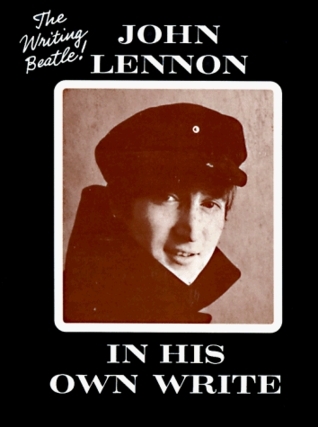 In His Own Write

How does a Beatle write ?

Like he took Lewis Carroll, Roald Dahl, and a double-tracked James Joyce and fed them backwards through a Mellotron. And he did.

Poetry reading with The Beatles, c. 1964

I am a John Lennon fan... but this is complete crap.If you think that this book is any good, I bet you like the cut and colour of the Emporers New Clothes too.

When I was quite young, maybe around eight or nine, we had a joke format among the kids at my school called Antiwitze, anti-jokes. Anti-jokes were short nonsensical stories or even just sentences that lacked any kind of humoristic payoff. They thrived on their absurdity and on the fact that you expected a payoff while hearing one and then there was none, that was the whole concept. I remember a particularly short, ominous one:

Three people from Berlin are sitting in a telephone cell with yoghurt. (Drei Berliner sitzen in einer Telefonzelle mit Joghurt.)

For some reason, anti-jokes were all the rage for a while. I think even though none of us could've explained it or probably was even aware of it, we, as eight-year-olds already quite familiar with traditional joke formats and on the look for something new, had accidentally turned to dadaistic nihilism.*

(Then we grew up and tired of them and progressed to "your mama" jokes.)

Style-wise, many of the stories in In His Own Write reminded me of anti-jokes. Lennon also sprinkles in a good helping of puns, most often of the kind where you replace the word one would expect with a similar-sounding, nonsensical one (a little bit like Cockney slang) and he definitely likes to play with literary tropes - one story is written like a Famous Five story, another one like a seafaring adventure.
This mixture of anti-joke, pun avalanche and trope imitation works quite well because that way, Lennon manages to cleverly disappoint and disrupt linguistic and narrative expectations we unconsciously harbour, and I'd say that's where the pleasure in reading In His Own Write comes from.

God, my lit student is showing. Hate it. Who am I to say where the fucking fun in reading this hot mess of a book comes from? Maybe what you'll enjoy most is the cool little drawings (also by Lennon) between the stories. Maybe you have listened a lot to John Lennon doing interviews, like me, and while reading you've got a little Lennon voice in your head reading the stories to you. (That's what happened to me and it made the experience so much more lively.) Maybe you'll also hate this thing because it's problematic in many ways. Although only fleetingly apparent, certainly not as main themes - casual racism, sexism, antisemitism, above all ableism - in 1964, John Lennon had it all. And in general, for a good part of his very short life, he wasn't a very good person either. I can understand if he's not the kind of author you'd like to read a book by. All I can tell you is that I, personally, laughed on every single page, which hasn't happened in a long time, and even though the occasional terrible joke made me go "....... whoa", I gotta say I still majorly enjoyed reading this book.

Taken as a period picture of the mind of someone born in 1940s upper middle class English society and raised on casual racism, classism, colonialism, taken as a look inside the head of Lennon the man, or simply read as a bunch of dumb-but-clever jokey little texts, In His Own Write is a big recommendation from me. Just cake it with a stain of Walt.

I sat belonely down a tree,
humbled fat and small.
A little lady sing to me
I couldn't see at all.

I'm looking up and at the sky,
to find such wonderous voice.
Puzzly puzzle, wonder why,
I hear but have no choice.

'Speak up, come forth, you ravel me',
I potty menthol shout.
'I know you hiddy by this tree'.
But still she won't come out.

Such softly singing lulled me to sleep,
an hour or two or so
I wakeny slow and took a peep and still no lady show.

Then suddy on a little twig
I thought I see a sight,
A tiny little pig,
that sing with all it's might.

I think with this book, you really have to take Paul McCartney's advice in the forward:

There are bound to be thickheads who will wonder why some of it doesn't make sense, and others who will search for hidden meanings...None of it has to make sense and if it seems funny then that's enough.

I love the liberty of writing doggerel, Jabberwocky, and gibberish. It helps disguise minor typos (like "it's" instead of "its" in the above poem). "That's not a typo, man. You just don't get it!"

Still, I really do wonder how this was received when it was first released. This would have been during the height of Beatlemania, and it must have surely turned a few heads.

In my edition In His Own Write is paired with A Spaniard In The Works, but I guess I'll write the reviews separately. Also, Paul McCartney not Yoko Ono wrote the introduction, and, frankly, I can only be grateful, because Paul gives the readers a good advice - the stories don't have to make sense and there is no need to look for a hidden meaning: "if it seems funny then that's enough".

It was often funny and sad at times, but brilliant all the way through. John Lennon had a knack for words and an ability to mess with them, creating something even better if extremely strange. Truth be told, a few years ago I probably wouldn't have understood this book. Two years in England certainly helped me when reading this book, I could recognise slang and all those every-day expressions they just don't teach you in English lessons at school.

In His Own Write is a quirky little book, certainly worth a read if you can get your hands on it.

I read this title in a paperback "two-fer" edition back in the early 1990s. It was sandwiched together with Lennon's other Beatles-era book, A SPANIARD IN THE WORKS. Yoko, ever anxious to turn a buck off Lennon's legacy, has since reissued the two collections of nonsense verse and stories separately, in facsimile first-edition hardcovers. If you're a Lennon completist, then fine. Otherwise, trawl amazon for the "two-fer" version.

I guess you've got to know a bit about British nonsense verse and the British cockney tradition of word games---"Take a butcher's up the apples & pears", and that sort of thing. The selections here can be especially fun if read aloud. Otherwise, they will often seem like gibberish.

Lennon was breaking no new ground here, poetically. Authors such as Edward Lear and G.K. Chesterton (whose works Beatle John was clearly familiar with) had been mining similar veins decades before Lennon did. There's nothing especially profound or insightful here either. But there is a sly sense of humor and fun as Lennon plays with the English language and takes the piss out of literary pretense. An example from Lennon's poem "I Sat Belonely":

I sat belonely down a tree,
humbled fat and small.
A little lady sing to me
I couldn't see at all.

I'm looking up and at the sky,
to find such wondrous voice.
Puzzly puzzle, wonder why,
I hear but have no choice. . .

So, if this seems like your cup of tea (British pun intended), go ahead and imbibe with my blessings. IN HIS OWN WRITE, and its companion A SPANIARD IN THE WORKS, are good fun for a rainy afternoon---but best taken in small doses.

Lennon had a deft pen. But I think it was wise that he kept his day job.

People will say 'This book is absolute crap!'...They are dead wrong! They obviously have a short attention spam because this book is so meaningful! If you are willing to read this book, i suggest to take your time and read it slowly, if you don't, you will find yourself putting the book down after the very first poem! Make sure you spend time to think deeply about every word, you will find it much more enjoyable! i understand that not many people understand Liverpudlian but that is no excuse to let down such a great and meaningful song writer!

This is worth reading purely because it’s written by John Lennon and so it’s therefore somewhat historically relevant because of that. It’s basically a collection of psychedelic short stories and nonsense poetry, and as such as it’s hard to rate. It is what it is, you know? It’s alright and readable enough.

Read this over 50 years ago, it still sits in a place of honor on my shelves. A favorite.

Oh John (or #jawn if you have the misfortune of following me on Tumblr), how I love to hate you and hate to love you.

Honestly, I surprised myself by even picking this up considering he's my least favorite Beatle, but on my never ending quest to absorb as much Beatle knowledge and material as possible, I figured I'd give this a quick read.

I think the part I liked most about this little...whatever you'll call it, was Paul's (#pol, again for the Tumblr reference) introduction. He prefaces this mishmash of words and drawings with the simple statement that sometimes it's not supposed to make sense. It's just John's crazy (albeit sometimes genius) mind at work.

I'm sure somewhere there's a professor teaching this to a classroom full of bright-eyed creative writing freshmen who are buying the BS of "exploring your mind" and "letting go of all thoughts" but I think Paul was right, you should just take it as it is. It's John putting together a bunch of silly little stories, throwing in some drawings and capitalizing on his Beatle fame by selling a book. It's nothing more, it's nothing less.