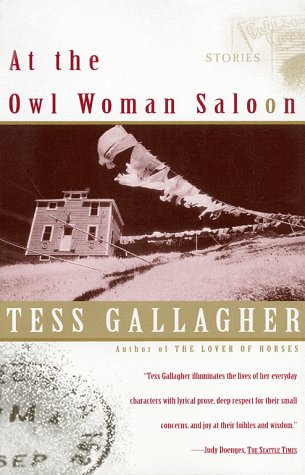 At the Owl Woman Saloon: Stories

"I forgo the great pleasure of hurling a venison pie at those who wish to deny my attempts to connect or to reconnect, to gather up the shards and bits of my amalgamated unbelonging. I walk away. I turn my back when they want to see my credentials. I become the cannibal of my authenticity, which is the authenticity of river, of mountain. It runs. It stands"

My main beef is that this book pitches itself as a western. I mean, it's called Owl Woman Saloon and if you flip through there's all this kind of westerny stuff between the chapters about saloons and pioneer women. But that's it. The story about a lumberjack is kind of western-esque, at best. Maybe Gallagher was trying to tie in that good ol' American spirit characterization, but I didn't see it. So that felt like false advertising at the end of every story and on every level, and I'm super salty about it.

Honestly, every story in this collection was worse than the last. I couldn't care about a single character and the plots were just straight up unpleasant. The writing just wasn't good enough to carry the tales like: a woman puts down her cats; a pretentious poetry professor skeevs upon a student and obsesses about Napoleon; or a lumberjack knows another lumberjack whose wife is a gold-digger. They just weren't good stories and they weren't even well-told. That feels super harsh to write, but it also feels super accurate.

I would start every story thinking, "Maybe I will actually like this one," and a couple of pages into a few of them I thought, "Wow, this is actually a pretty good set up," and by the end of each story I was just hoping it would be over soon. Just, like, not good. Not even super bad, just totally unremarkable in that ennui=deep kind of way that writers seem to use when they want to write about **emotions** but they don't really have anything to... like... say. Just no meaning at all. Just crappy things happening to kind of crappy people and what feels like an implied hope that you'll divine this deep message from their suffering. "Oh, so real," someone might say. "How bold to depict this image of humanity," they might say. But I'm just not into that shit.

The only exception is the last story, "The Woman Who Prayed", which was actually very good. Quite unexpected after reading the previous fifteen pieces. Title really says it all, but the descriptions of how she changes are really rich and moving. The story was non-bogus. This story alone was good enough to bring the rating up to two stars, because it made me feel like this author could totally speak to me if they had the right story to tell me.

I only made it through the first six of sixteen stories. There are things I loved about them, like that the places she writes about are neighbors and home to me, but a lot of the voices didn't ring true to me, especially in stories with male narrators. After reading Willie Vlautin and Tom Franklin books I might have perceived Gallagher's men as especially inauthentic (or maybe just not to my taste?).

I have a feeling I'm going to want to come back to this collection to finish it later; my expectations might have just been too bloated for it to live up to. There are definitely things I love in the stories I read, I just haven't felt excited or compelled to pick the book up and READ it when I look at it on my nightstand. Maybe it's too high brow and artsy for me. I don't know.

I find myself really curious to know how other people feel about Gallagher's work, and also nervous to say anything bad about it/respond this honestly to it because she's local, her husband's a legend, etc. Like I'm not being supportive or I'm just too stupid to know what's good for me.

I think I'll try some of her poetry before I pick these stories up again.

A remarkable collection of elegantly written short stories, that are linked together in time and place. I did not know Gallaghers work before reading this book, but was not at all surprised to find that she is a poet. Several of her stories felt like poems to me. In particular the first, which almost seems like a sonnet, with no wasted words at all and a turn midway through that I found to be completely unexpected. A real delight.

This is my first Tess Gallagher book and I'm impressed with her style. I tend to read very quickly, but these stories slow me down. Her characters are not easily put aside for the next story; they require some thought and remembrance. Only then can I proceed to the next story, the next character. These are quietly less than perfect people who still manage to find a reason to keep going.

I reviewed this (favorably) when it came out, about ten years ago. The stories here are connected by small details, and the overall picture is of an extended community, warts and all. Very worthwhile.

Haunting, etheral. One of my favorite Christmas presents ever.

I haven't completed this book yet, but I am enjoying it very much. I like the way Tess writes. I look forward to reading more of her work.

I have learned that I do NOT like short stories. I have one left to read in this one and I'm having a hard time doing it.

Tess Gallagher is an amazing poet and story teller. This book of short stories offers unique, sometimes bizarre slices of life. I would love to read more of Tess!