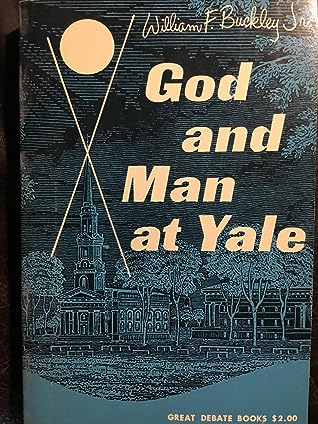 God and Man at Yale: The Superstitions of 'Academic Freedom'

In 1951, a twenty-five-year old Yale graduate published his first book, which exposed the extraordinarily irresponsible educational attitude that prevailed at his alma mater. This book rocked the academic world and catapulted its young author, William F. Buckley Jr., into the public spotlight.

Quotes From "God and Man at Yale: The Superstitions of 'Academic Freedom'"

"[D]emocracy can itself be as tyrannical as a dictatorship, since it is the extent, not the source, of government power that impinges on freedom."
-William F Buckley"
9 likes
"I believe that the duel between Christianity and atheism is the most important in the world. I further believe that the struggle between individualism and collectivism is the same struggle reproduced on another level."
8 likes
"We find that in the absence of demonstrable truth, the best we can do is to exercise the greatest diligence, humility, insight, intelligence, and industry in trying to arrive at the nearest values to truth. I hope, of course, to argue convincingly that having done this, we have an inescapable duty to seek to inculcate others with these values."
5 likes
"The individualist insists that drastic depressions are the result of credit inflation; (not excessive savings, as the Keynesians would have it) which at all times in history has been caused by direct government action or by government influence. As for aggravated unemployment, the individualist insists that it is exclusively the result of government intervention through inflation, wage rigidities, burdensome taxes, and restrictions on trade and production such as price controls and tariffs. The inflation that comes inevitably with government pump-priming soon catches up with the laborer, wipes away any real increase in his wages, discourages private investment, and sets off a new deflationary spiral which can in turn only be counteracted by more coercive and paternalistic government policies. And so it is that the "long run" is very soon a-coming, and the harmful effects of government intervention are far more durable than those that are sustained by encouraging the unhampered free market to work out its own destiny."
4 likes
"[Professor Greene's] reaction to GAMAY, as published in the Yale Daily News, fairly took one's breath away. He fondled the word "fascist" as though he had come up with a Dead Sea Scroll vouchsafing the key word to the understanding of God and Man at Yale. In a few sentences he used the term thrice. "Mr. Buckley has done Yale a great service" (how I would tire of this pedestrian rhetorical device), "and he may well do the cause of liberal education in America an even greater service, by stating the fascist alternative to liberalism. This fascist thesis . . . This . . . pure fascism . . . What more could Hitler, Mussolini, or Stalin ask for . . . ?" (They asked for, and got, a great deal more.)

What survives, from such stuff as this, is ne-plus-ultra relativism, idiot nihlism. "What is required," Professor Greene spoke, "is more, not less tolerance--not the tolerance of indifference, but the tolerance of honest respect for divergent convictions and the determination of all that such divergent opinions be heard without administrative censorship. I try my best in the classroom to expound and defend my faith, when it is relevant, as honestly and persuasively as I can. But I can do so only because many of my colleagues are expounding and defending their contrasting faiths, or skepticisms, as openly and honestly as I am mine."

A professor of philosophy! Question: What is the 1) ethical, 2) philosophical, or 3) epistemological argument for requiring continued tolerance of ideas whose discrediting it is the purpose of education to effect? What ethical code (in the Bible? in Plato? Kant? Hume?) requires "honest respect" for any divergent conviction?"
3 likes
"He was a conservative all right, but invariably he gave the impression that he was a conservative because he was surrounded by liberals; that he had been a revolutionist if that had been required in order to be socially disruptive."
3 likes
See All Quotes From "God and Man at Yale: The Superstitions of 'Academic Freedom'"