Home › Authors › Nora Ephron › I Remember Nothing: and Other ... 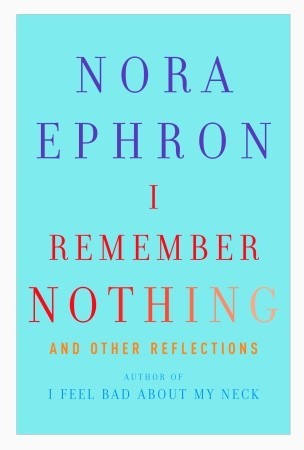 I Remember Nothing: and Other Reflections

Nora Ephron returns with her first book since the astounding success of I Feel Bad About My Neck, taking a cool, hard, hilarious look at the past, the present, and the future, bemoaning the vicissitudes of modern life, and recalling with her signature clarity and wisdom everything she hasn’t (yet) forgotten.

Ephron writes about falling hard for a way of life (“Journalism: A Nora Ephron returns with her first book since the astounding success of I Feel Bad About My Neck, taking a cool, hard, hilarious look at the past, the present, and the future, bemoaning the vicissitudes of modern life, and recalling with her signature clarity and wisdom everything she hasn’t (yet) forgotten.

Ephron writes about falling hard for a way of life (“Journalism: A Love Story”) and about breaking up even harder with the men in her life (“The D Word”); lists “Twenty-five Things People Have a Shocking Capacity to Be Surprised by Over and Over Again” (“There is no explaining the stock market but people try”; “You can never know the truth of anyone’s marriage, including your own”; “Cary Grant was Jewish”; “Men cheat”); reveals the alarming evolution, a decade after she wrote and directed You’ve Got Mail, of her relationship with her in-box (“The Six Stages of E-Mail”); and asks the age-old question, which came first, the chicken soup or the cold? All the while, she gives candid, edgy voice to everything women who have reached a certain age have been thinking . . . but rarely acknowledging.

Filled with insights and observations that instantly ring true—and could have come only from Nora Ephron—I Remember Nothing is pure joy.

Nora Ephron died a few days ago, and one of the first things I did after reading her obituary was to get this book from the library. It's a delightful read, filled with great quotes and essays about things like getting her start in journalism, what it's like having a movie flop, having a meatloaf dish named after her, getting addicted to online Scrabble games and how forgetful she has become.

The book is slight -- only 135 pages -- and some of the stories are only a few pages long, but I was utterly charmed by it. I think I annoyed my husband by insisting on reading so many passages aloud to him, but after I was finished he always admitted how good the quote was.

Toward the end of the book she has an essay about getting older, and when she wrote it I think she had already been diagnosed with the disease that would eventually end her life. One passage was particularly poignant:

"The realization that I may have only a few good years remaining has hit me with real force, and I have done a lot of thinking as a result. I would like to have come up with something profound, but I haven't. I try to figure out what I really want to do every day, I try to say to myself, If this is one of the last days of my life, am I doing exactly what I want to be doing? I aim low. My idea of a perfect day is a frozen custard at Shake Shack and a walk in the park. (Followed by a Lactaid.) My idea of a perfect night is a good play and dinner at Orso. (But no garlic, or I won't be able to sleep.) The other day I found a bakery that bakes my favorite childhood cake, and it was everything I remembered; it made my week. The other night we were coming up the FDR Drive and Manhattan was doing its fabulous magical, twinkling thing, and all I could think was how lucky I've been to spend my adult life in New York City."

I Remember Nothing by Nora Ephron is what a reader has come to expect of this writer. This is the second time I have enjoyed this book and it is especially enjoyable as an audiobook, read by the author. Ephron passed away a few years after the writing of these essays and knowing this makes the subject matter even more poignant. As usual, her points of view are tinged with a healthy helping of tongue-in-cheek scepticism. It is a review of her interesting life: the good (successful movies), the bad (divorces, dysfunctional parents) and the in-between (which is what makes life worthwhile). Nora Ephron talks about life in such a way that the readers may think that she is expressing their views as well as her own. Highly recommended.

"And every time one of my friends says to me, "Everything happens for a reason," I would like to smack her." (p.129)

I purchased this book last year. I put in down on a table piled high with books, and then Nora Ephron died. I didn't pick it up until a few weeks ago.I unearthed it, and read it slowly, knowing that it would (barring posthumous publishings) be the last new and original book by her I would read. When I was first married and living in New York, I read her sister's book "How to Eat Like a Child." I related. I continued to read books by Delia and Nora Ephron. I had friends who knew the same people she did. Had I kept living there, we might have met. Would we ever have been friends? No, but now I feel I have lost an old friend, or at least someone with whom I have been through the wars. In I Remember Nothing: and Other Reflections, she wrote about her life with wry good and great humor, and incidentally, the life my sister and and I are living. In it there are hints of mortality, of the end which approached, I think, much more quickly than was anticipated. She wrote about the added deficits of aging. She made lists, which could be mine: Cary Grant is Jewish,Cary Grant is not Jewish. Her final list, and the last chapter of the book, which while not HER final list, was titled "What I Will Miss." Many of those entries could belong to any one of us. And if I may, I would like to suggest one more item be added to the list of things that will be missed: Nora Ephron.

[3+] A light and warm hearted collection of reflections. I enjoyed listening to and chuckling along with Nora. But the title is apt for my experience - this is not a memorable book.

I don’t have a lot to say about I Remember Nothing after gushing over I Feel Bad About My Neck. There were some mildly amusing parts but listening to the two audiobooks back-to-back I noticed her voice lacked the playful tone that added to that one, which made this one seem more solemn. Although it didn’t have the same vibe to me I still enjoyed it very much because it was more of a glimpse into her personal life and there is so much to be learned from her wisdom and insightfulness. The “What I Won’t Miss” and “What I Will Miss” Lists at the end made for a very poignant ending and gave a sense that she was really thinking of her own mortality as she wrote her last book. I just wish it would have been longer.

Re-reading this, it made me so sad that this was Ephron's last work, and that she died only two years after the publication.

Editor: We want you to write a book about your life.

Ephron: I'm in the middle of something.

Editor: Okay, make it short. Just write anything down. People know who you are. They've seen When Harry Met Sally. We put it out right before Christmas, they'll buy it, no problem.

Ephron: But I don't remember anything I haven't already written about.

Edior: Even better! We'll call it, "I Remember Nothing"!

The good news is that this book is only 130 pages, so if you're in a contest with someone to see who can post more books as "Read" on goodreads, it's a good choice. Otherwise, it's not.

Three of Nora Ephron's movies are on my list of top favorite movies of all time. I remember watching "Sleepless in Seattle" in high school and just falling in love with it. After that, any time I broke up with a guy, I would watch "Sleepless in Seattle" to remind myself that there was probably a Tom Hanks out there somewhere for me and there was but his name is Matt. When I heard Nora Ephron died, I made my husband and sons sit down and watch "You've Got Mail" with me and we all laughed and loved it. So, when I sit down to read "I Remember Nothing," I sit down pretty biased.
I loved this book. It was interesting and funny and sad all at once with these neat little observations on everything from chicken soup to email to believing the stories of an alcoholic mother. Ephron has been rubbing elbows with some pretty famous people since she was a child in Hollywood - she drops plenty of names which would make one think she's full of herself, but she comes across as self-effacing, someone you might like to have lunch and just chat with.
I have read some negative comments about the book on this site, mainly that she makes references to famous people or being a democrat or something of that nature. A few comments suggest that she's petty or spoiled. I think those folks have missed the whole point of the book. In the end, these little moments of getting lost in traffic or a recipe for bread pudding or Scrabble Blitz addiction speak so much more about our own humanity than the big ones do - and they represent all these small things that make up a big life.
The book ends with two lists. The first: "What I Won't Miss" and "What I Will Miss" - I couldn't finish reading them with dry eyes.

The fabulous Nora Ephron wrote this at 69, two years before her premature death from complications from leukemia. It's a short book, a collection of anecdotes about her life, thoughts on things that annoy her and how it feels to be getting old. Although she doesn't mention her health, she alludes to it when she lists things that she will and won't miss after she passes on, and thanks her doctors at the end.

Nora is - was - a wonderful writer and she can tell stories that don't amount to much in such a way that you enjoy every moment of the telling. I especially enjoyed her thoughts about how your memory goes as you get older - how you start off thinking it's somewhat amusing that you can't locate the name of a movie you saw or a book that you read, but how you eventually start to feel disconnected from the life that you have lived because you can't remember huge chunks of it, even though some insignificant details stick insistently in your brain.

I liked this book. It's both funny and melancholy. It makes you think about small things that you don't usually think about and it makes me sad to think that this will be the last book she wrote.