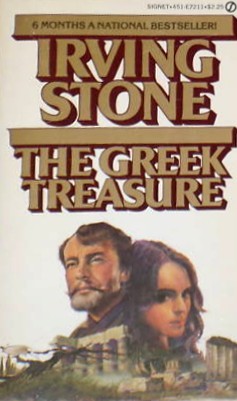 I remember being fascinated by the discovery of ancient Troy as a teen and recall reading everything I could get my hands on concerning this subject as well as the Trojan War.Stone has once again been diligent in his research so this book should be an easy and enjoyable way to learn all about ancient Greece and the Trojan War.

Henry Schliemann was a very peculiar man, but only someone like him could have had the madness of excavating Troy. His relationship with the 30 years younger Sophia was a fortunate and interesting adventure. What I most appreciated was that he had the courage of pursuing his plans despite the fact that his contemporaries and the Greeks believed that Homer’s Troy was pure myth. He demonstrated that the ancient writings told a true story when he uncovered Priam’s treasure. A lesson for sceptics! Interestingly enough, the treasure has disappeared from the Berlin museum during the II WW. It would have been maybe safer if Schliemann would have sold it to the Metropolitan Museum. The book doesn’t read very easy if you don’t like antique history, but the funny style of Schliemann and his volcanic nature makes it attractive. Plus Sophia is captivating with her gentle, smart and committed nature. Interesting overall, a bit sad in the end, classifies after Michelangelo’s biography which remains my Stone’s favourite.

This book has it all -- intrigue, adventure, history, love, science, conflict, and human emotion. I would read it again this week if I had the time! I enjoy this American author (I have read four more of his biographical novels and would love to read them all). The book is a true account of Henry and Sophia Schliemann's life together, and tells their story from the time they married (she at 17 and he at age 47) and follows it until Henry's death. They work together in the field of archaeology and make amazing discoveries and gather treasures of great significance. In my opinion, Irving Stone's research coupled with his characterizations makes a great read!

I usually really enjoy Irving Stone. NOT this one! I enjoyed the history but beyond that....the characters were dull and un-enjoyable. Sorry Irving. This was a struggle to get through. Pooh.

I have to stop at page 240. I don't know why I would have thought a book about archaeology would be engaging, when the job itself is an exercise in patience and perseverance. Henry Schliemann is an insecure, testy individual intent on proving himself to the world. His wife is a long-suffering Greek girl intent on making her arranged marriage work. I don't find the characters easy to identify with, nor do I particularly like them. I'm very happy he found Troy, but I don't want to suffer through any more long summers with them!

It was really long, really bizarre and especially towards the end it was all just summary. But some of the Archeology stuff was kind of interesting.

Up until 19th century, Troy was considered a fabled city, Iliad was considered a piece of fiction. All this was challenged by a merchant-turned-archaeologist, Henry Schliemann who used Iliad and Pausanias’ Description of Greece as his compass to take an archaeological initiative which led him to discover some lost cities which he would end up giving them the names his desired cities without evidence.
This book covers his adventurous life and love story from the 1870’s and the initial chapters of the book have to do with the marriage of 47 years old Schliemann with 17 years old Sophia. He wants to get married to a Greek girl because he needs someone in his life who could also help him on his archaeological excursions in Turkey once their relationship sails safety through stormy episodes.
In Sophia, Henry finds an ideal partner who offers him full-fledged support in his excavation projects and at climactic moments too. She really stands out from the crowd because back in those days women were not deemed fit for such work and women would also tend to do household chores obediently. She also turns out to be different in a way that during that era it was not considered for women to work but she would command groups of laborers at the sites.
The couple becomes a sensation in the world of archaeology when they discover treasures worth inestimable values in Troy and Mycenae and also because of Henry is quick to draw conclusions without any concrete shreds of evidence. Eventually, he gets recognition from places which is also accompanied by great criticism from those some qualified archaeologists and as well as from lifetime enemies who are directed by envy and spite. Eventually, they have to show endless resilience to deal with their slating and in their projects too as sometimes they get challenged by sluggish bureaucracy, bogged down by weather, virulent epidemic of disease among workers, the lawsuit which results from their smuggling of one of the greatest gold cache from Turkey to Greece.
I reckon this book will mostly be enjoyed by those who are familiar with Iliad and have an interest in archaeology because at times the book gets quite dull particularly if it comes to the technical description of excavations. Moreover, I would have appreciated this book, even more, had the author told us when and how Henry got motivated to take these initiatives.
I read about Henry Schliemann and his wife, Sophia Schliemann quite recently in a book called “Don’t Know Much About Mythology” by Kenneth Davis and co-incidentally I stumbled upon this book at a secondhand bookshop which is near my house and bought it immediately.

I read this in the interest of research (it covers the digs at Troy and the discovery of Priam's Treasure, the dig at Mycenae, and a few others) and was pleased with how much of this couple's life the novelization includes. A fan of Homer, Heinrich Schliemann is 47 and determined to take a young Greek wife, and ends up marrying Sophia (who was only 17 at the time). Despite his wealth, he wasn't always given immediate permission to proceed in his archaeological pursuits. The story covers his difficulties in procuring workmen and tools as well as having overseers who didn't share his vision. I'm sure at the time this was written, the writing style was popular, but it's a bit dated now.

An oldie of my Mom's! She always loved Irving Stone, so when we found some of his books in a box of her old books, I decided to give it a try! It did not disappoint. It was a very interesting read. I have to admit that going into this, I didn't have much interest in archeology. I also can't say I'm going to run out and learn all about it now. That being said, I really enjoyed this!

Excellen book. Well-written with vivid characters and a captivating story. In addition to all that you will get a free lesson in history and archeology.