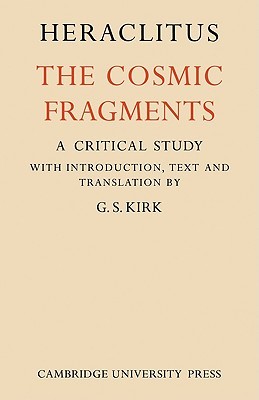 I recently watched a film called Il Rosso e Il Blu. It’s a pretty mediocre and formulaic high-school drama, but there’s a nice scene where the History of Art teacher – a crotchety and bitter old man who apparently hates his indifferent teenage students and his life – forgets his bitterness for a moment and bursts into an impassioned speech.

"There is something in art, as in fact in nature, that reassures us and something on the other hand that torments us, that disturbs us. A green meadow full of flowers or a clear blue sky without clouds calms us; the stillness of a lake or the violence of a storm disturbs us. The beauty of a greek statue – a Fidia or the Venus de Milo – calms us; Friedrich’s Der Mönch discomfits us, alone before the immensity of the sea. Two eternal feelings in eternal struggle: the search for order and the fascination with chaos; man abides within this struggle, we all live in it, order and disorder. We look for rules and regularities, forms, canons but we never grasp the real functioning of the world, the real form of all that is outside us and all that is within us and this for man is an eternal mystery… our incapacity to resolve this mystery terrorises us, forces us to oscillate between the search for an impossible harmony and abandonment to chaos…"

For those familiar with the history of Western philosophy, this sets off certain irresistible resonances and one of them is the opposition of Plato and Heraclitus. Plato believed in perfect forms and eternal, objective truths. Heraclitus, the obscure, the riddler, the flowing philosopher, believed only in change and flux. Nothing is stable, nothing is secure, as in his most famous saying, one cannot set foot in the same river twice. (Aristotle tells us that the Heraclitean Cratylus claimed one cannot even do it once.)

If there’s a take-home from this book, it’s that this view of Heraclitus’ philosophy is at best a gross simplification and at worst a calumny. It derives largely from Plato, whose loathing of Sophists, Heracliteans and crypto-Derridean hipsters is well-known. For example:

THEODORUS: About these speculations of Heracleitus, which, as you say, are as old as Homer, or even older still, the Ephesians themselves, who profess to know them, are downright mad, and you cannot talk with them on the subject. For, in accordance with their text-books, they are always in motion; but as for dwelling upon an argument or a question, and quietly asking and answering in turn, they can no more do so than they can fly; or rather, the determination of these fellows not to have a particle of rest in them is more than the utmost powers of negation can express. If you ask any of them a question, he will produce, as from a quiver, sayings brief and dark, and shoot them at you; and if you inquire the reason of what he has said, you will be hit by some other new-fangled word, and will make no way with any of them, nor they with one another; their great care is, not to allow of any settled principle either in their arguments or in their minds, conceiving, as I imagine, that any such principle would be stationary; for they are at war with the stationary, and do what they can to drive it out everywhere. (Plato, Theaetetus 180 trans. Jowett)

Panta rhei – everything flows – is not thought to be a genuine saying of Heraclitus, nor would radical relativism or some sort of epistemological abjuration be supported by the extant fragments.

Inasmuch as we can reconstruct a Heraclitean philosophy of Cosmos, its core is a belief in an order and measure which regulates Man and nature (Logos, Metron) and in the unity of opposites. Many fragments illustrate this second facet, the most famous being “the way up and the way down are the same”.
The unity of opposites is further illustrated with two Heraclitean images which are in my opinion his most beautiful: the bow and the lyre. Both cases illustrate form and function arising from a unifying and harmonious tension between opposites. Once the principle is embodied, the question of whether one side is up or down is irrelevant. Both are both. “Strife is justice."

Heraclitus’ use of the image of fire led to Aristotle inserting him into his schema of pre-Socratic philosophers as material monists. Thales believed all things arose from water, Anaximander from the boundless, Anaximenes from air and Heraclitus from fire. Here we have Aristotle’s love of order giving us a picture of pre-socratic philosophy which is neat, simple and false (see e.g. Cherniss for details). Many of the pre-socratics were fascinated by the idea of unifying principles in nature, but the idea that they thought everything is made of one kind of stuff is a crude and uncharitable interpretation. And incidentally one which makes Aristotle’s ideas look all the more brilliant in comparison.

The fire fragments are certainly striking. “All things are an exchange for fire and fire for all things, just as goods for gold and gold for goods.” “This world, which is the same for all, no one of gods or men has made. But it always was and will be: an ever-living fire, with measures of it kindling, and measures going out.“ It is not hard to see the attraction of such oracular statements, which could be applied to the most modern conceptions of quantum universes blinking in and out of existence between potentiality and actuality. If we want to read them as evidence for a Heraclitean philosophy and not simply poetry, we would be brought back to his key principles of ordered change and the unity of opposites.

Kirk’s book is a serious one. (For an unserious book on Heraclitus, see Kahn’s unfortunate Art and Thought). This means large parts of it are dry and technical. If you have not mastered the entire corpus of ancient Greek literature and spent many years in the company of Denniston’s Particles, much of the discussion will probably be over your head. It was certainly over mine. Instead I saw only a psychodrama of academia. There have probably been 15-20 people in the last 150 years who have been seriously concerned with and willing to spend significant time discussing, for example, respective oratorical strengths of different forms of the optative independent clause in Ionian, Attic and Ionicised Attic dialects of the 5th and 6th centuries BC. Those people all knew each other (or at least each other’s work) very well, and apparently quite often hated each other.

I’m not sure I’m that interested in what Kirk thinks of what Cherniss thinks of what Shorey is rumored to have thought of what Guthrie once said about what Jaeger’s wife told him Reinhardt thinks of what Mondolfo once wrote in an acid review of what Zeller and Gigon think of Kranz’s decision to overrule Diels’ decision to mark one word in a fragment as a direct rather than an indirect statement of Heraclitus. But the phenomenon as a whole is certainly fascinating. And more seriously, these men’s (they seem to have all been men) devotion to years of painstaking philological scholarship to attempt to reconstruct the thought of a man who lived 2600 years before them, is something I found quite staggering and quite moving. Because if you really want to understand what Heraclitus thought, this is the sort of work that’s involved. A search for order.

This combination of words by ancient Greek philosopher, Heraclitus, is known as «Fragments» because there are no actual works of his in existence today. There are only examples from antiquity where others quoted his long lost works. This book is, therefore, a compilation of bits and pieces of Heraclitus' unique kind of philosophy. Heraclitus represents a kind of missing link of philosophy in a certain way, drawing our attention to a time in history when much different fundamental ideas could have shaped our minds to come for the next millennia.

style="display:none" Call me by your name