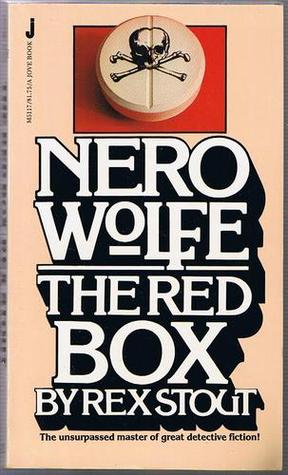 A woman is dead, and the fortunes of overextended theatrical producer Llewellyn Frost depend on solving the mystery of the red box: two pounds of candied fruits, nuts and creams, covered with chocolate—and laced with potassium cyanide.

When Nero Wolfe’s suspicion falls on Frost’s kissing cousin, Frost wants the detective to kill the sickly sweet case—before it kills him.

Ev A woman is dead, and the fortunes of overextended theatrical producer Llewellyn Frost depend on solving the mystery of the red box: two pounds of candied fruits, nuts and creams, covered with chocolate—and laced with potassium cyanide.

When Nero Wolfe’s suspicion falls on Frost’s kissing cousin, Frost wants the detective to kill the sickly sweet case—before it kills him.

Eventually, with a new client, and after a few more bodies make appearances, Wolfe finally has the red box in hand. He opens it up, and with that, the case.

“Nothing is more admirable than the fortitude with which millionaires tolerate the disadvantages of their wealth.”

It has been a while since Nero Wolfe had a case which made frustrating times for Archie Goodwin. So when a potential client shows up Archie develops a devious plan not only to get Nero Wolfe take the case, but also to lure him outside to the shop where a crime was committed. Readers familiar with the series know that the great detective almost never leaves his home except in case of some major events, like floods, earthquakes, and volcano eruptions. The client changes his mind quickly and tries to stop Wolfe's investigation, but the great detective felt he was committed the moment he went outside.

As usual this Nero Wolfe mystery is less about the mystery (the identity of villain was obvious after the first half of the book, the detectives spent the rest of it trying to collect evidence which was practically non-existent), but more about interactions between characters which are nothing short of brilliant and very funny at times. I also found it interesting that Rex Stout while being a very conservative person politically used the quote I put in the beginning of the review; it is quite famous and comes from this book.

The book deserves firm 4 stars and is highly recommended to the people looking for a mystery with very memorable main characters.

This is the first real Nero Wolfe I've read in the chronological-with-gaps reread. Archie's character is solidly in place, the mystery is a more typical one, and Stout is solidly in his wheelhouse here.

The plot is pretty simple: a model is poisoned, and a dude with White Knight Syndrome and a repressed to desire to marry his rich first cousin hires Wolfe. Wolfe actually leaves the brownstone in this one, always a notable occurrence, and Archie gets cut out of the information loop, a much less notable (but always fun) one.

Stout's wife was a fashion designer, so he knew the world of fashion well; he's writing a story set in his milieu, with no vague or ill-informed references to gold prospecting or Argentina or whatever. It makes a difference. (And it's fun to note the differences between the modern fashion world and the one of almost a century ago.)

Basically, the first three novels are skippable for everyone except Wolfe fanatics. This book is a decent starting point for people just getting into the series.

The start of another beautiful relationship

The Red Box was the fourth of Rex Stout’s Nero Wolfe murder mysteries. It was published in 1937. It is also the first Nero Wolfe book I have ever read...and what an enjoyable introduction it was too.

Wolfe's exploits are narrated by his able assistant Archie, himself a perfect foil for Wolfe: world weary, hard bitten, cynical and slyly humorous.

Overall it's a curious and pleasing hybrid of Agatha Christie and Raymond Chandler - if you like either writer, and especially if you like both, then this should provide lots to love. It did for me, and I look forward to reading more.

Early Wolfe and Archie. 1930s detective jargon and smart talk a little over the top, writing a little baggy, still working out the characters. More dependent on plot than later ones. You’ll beat Archie (but not Wolfe, of course) to the answer, but probably not by a lot; at least to the ful solution. Murder methods not terribly convincing, but not the point. But the payoff is that this one isn’t formulaic; this is Stout laid bare, trying out attitudes and relationships among the eight or so characters we’ll come to know and love.

3 Stars. The first two in the Nero Wolfe series set such a high standard - so hard to match. "Fer de Lance" and " The League of Frightened Men" remain among the best detective fiction ever written - almost a century after they saw the light of day. "The Red Box" didn't reach the stratosphere. It's good but it wasn't an all-night page turner like those two. One of the murders happens while the victim is sitting in Wolfe's office! Murder by Aspirin; I knew that taking too many could kill, but one? Only if it's laced with cyanide. The plot is complicated and starts with Llewellyn Frost, a twenty-nine year old man in the fashion business, presenting a petition to Wolfe requesting him to leave his office and travel the short distance to the location of a murder. A young model has died as the result of eating a chocolate containing, what else, cyanide. Llewellyn's cousin Helen is the main suspect. Wolfe refuses, "No man's pertinacity can coerce me." But the petitioners are all orchid lovers. He goes, with Archie quietly applauding, but Wolfe makes certain Frost is aware of his high fees. To me, too much talk, and too little happening. That's a three instead of a five. (January 2021)

I love Nero Wolfe. This book was published in 1937. This installment has Nero investigating the poisoning death of a young woman. As the investigation proceeds, more victims pile up. Wolfe actually leaves his home! At the time this was written, this mystery would have been a real puzzler. But, I had my suspicions about half way through. I didn't have all the details worked out though. The best part was. Archie's narrative. It seemed like he was sharper and downright funny in this one. A great classic mystery!

That’s what a fortune is for, to support the lawyers who defend it for you against depredation. Professionally speaking, I don’t entirely agree with Wolfe here, but I must admit there is a grain a truth in it. It is certainly pithy and witty.

This is the 4th Nero Wolfe novel. After completing the 27 NW books I own, out of 44, I am now filling in the gaps in my collection, and I’m reading them as I receive them. I noticed a difference in Archie’s character in this book - he is more sophisticated and charming than in the 3 previous novels. Likewise, Inspector Cramer’s character has taken on practically all the nuances it will contain for the next 40 years. I chuckled when Cramer comments in this book that “I’ll be ready to retire in another ten years.”

It all starts when a young man, Llewellyn Frost, hires Wolfe to investigate the murder of a model. He is concerned for the safety of his cousin, Helen Frost, (for whom he has more than cousinly feelings) who was a coworker of the dead girl. Archie gets irritated by Wolfe’s eccentricities and his reluctance to work, and he makes certain suggestions to the client about how to get Wolfe to visit the scene of the murder. It’s hilarious. Also hilarious are the interactions between Wolfe and Llewellyn’s father, Dudley Frost. Dudley is — hmmm, how would I describe him? He talks a lot, he’s a fool and an idiot, and anyone who knows Nero Wolfe knows he does not suffer fools, gladly or otherwise.

’Ah.’ Dudley Frost smiled at me broadly, with understanding; he transferred it to Wolfe, and then back to me again. ‘You seem to have gone to a good deal of trouble around here. Of course I can see that that was the best way to get your threat in, to arrange for a call with my son in your office. But the point is —‘

Wolfe snapped, ‘Put him out, Archie.’

According to Helen Frost’s mother, Calida Frost, the only way to shut him up is to give him good Irish whisky. Perhaps Dudley is smarter than he appears.

Speaking of Calida Frost, there is a marvelous play on words at the heart of the solution. I’ll not give away any spoilers, but if you love puns and word play, you’ll appreciate it. This isn’t one of my favorite Wolfe & Archie adventures, but it’s definitely above average.

Another fun Nero Wolfe. I thought it not quite as good as The Rubber Band. There was still the wonderful repartee between Nero Wolfe and Archie Goodwin, but it was less frequent and less pointed. The characterizations of the non-Wolfe employees was better in this one.

Murders in real life tend to be by persons known to the victim rather than by some random person. We are introduced fairly early to all of the possible perpetrators, only to have further murders. Thus, if I had had no suspicions, I could eliminate some about whom I might have conjectured. That said, I was fairly certain of some of the facts that Stout did not reveal until the last 10 pages. There was a surprise or two that I could not have seen. Good, solid fun, but no pretense of being more than 3-stars.

Still love this series, but I had it figured out simultaneously with Nero. This one was a bit too obvious.New York, 1936

There was a time in my life (really from my early teens thru my early twenties) in which I read nothing but what I call the Literature of the Fantastic. In plainer English if it was not a school assignment I feasted on a steady diet of science fiction and/or fantasy and nothing else. When I eventually tired of that and started to voluntarily seek to expand my horizons one of the first authors I settled on was Rex Stout. Being a relatively obsessive individual I sought out and read every Nero Wolfe mystery Stout wrote. Or at least I thought I did. Which brings me, quite directly, to The Red Box. Call this novel the one that got away-it was by no means lost I just did not realize it existed. I enlisted my librarian who found a copy for me in short order. I said all that to say this: it was wonderful to return to the brownstone on 35th Street and visit with Nero and company one more time. In The Red Box Wolfe has to track down a vicious poisoner-this novel was classic Stout with a good mystery and good interaction between the characters faithful readers have come to know and love: Wolfe, Archie Goodwin, Inspector Cramer, etc. I certainly did not chose it on purpose but this was a great high note to actually end the series on. (And yes I have thoroughly checked-this really was the only one of them I had not read.) Of course as far as I am concerned the series is not over, and not just because Robert Goldsborough has written some new entries. I know in my heart that, relatively untouched by time, Wolfe still visits his orchids from four to six each day. Perhaps now there is a laptop on Archie's desk which annoys Wolfe to no end. Saul Panzer and Fred Durkin still come running whenever Wolfe has a job for them. Archie still goes out dancing with Lily Rowan. Everyone is only a little bit grayer. But something as good as this should (and does) go on forever.