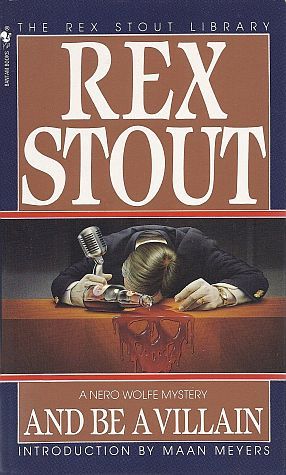 A man is poisoned during a live radio soft drink commercial, and Wolfe dispatches Goodwin to persuade the popular talk show host to hire Wolfe to solve this notorious crime, thus ending the bad publicity. (For once, he is eager for work: he has a large income tax bill to pay.)

This 1948 Rex Stout classic features Wolfe's first encounter with master criminal Arnold Zeck, Wolfe's Moriarty. If you have not read any of Nero Wolfe's adventures, this, followed by the other two books featuring Zeck--The Second Confession (1949), In the Best Families (1950)--is an excellent place to begin.

Nero Wolfe needs money yet again. I know I sound like a broken record, but this is how the majority of the series' books start. He sends Archie Goodwin to see a popular radio talk show host Madeline Fraser (think Oprah Winfrey before the era of TV) to accept his services in investigating a sensational murder which happened recently right in the middle of the show: a guest drank some soft drink from the show sponsors and fell dead. The murder seems to be completely random as there was no way to insure the right victim would receive the bottle with the poison.

Every self-respected private detective has his own arch-enemy evil genius, and Nero Wolfe is not an exception. While Sherlock Holmes has Professor Moriarty, Nero Wolfe's guy is named Mr. Zeck. This is the first time he makes an appearance, but Wolfe mentioned he encountered him before and that in case the time comes when he really has to cross his path, he would have to go into deep hiding. This prediction turned out to be prophetic in a later book.

Once again, the character interactions are great and some of Archie's antics in dealing with the law agencies made me smile a lot. This time the mystery part was masterfully done as well with Wolfe slowly getting into the bottom of seemingly impossible murder. The books of the series never fail to entertain and amuse; the rating is 4 easy stars.

This review is a copy/paste of my LeafMark one: https://www.leafmarks.com/lm/#/users/...

Rex Stout did it again. This is a detective novel featuring one of the best detectives Nero Wolfe who is an arm chair detective who never leaves his home to solve a case. All of the foot work is done by his brash, wise guy side kick Archy Goodwin. I recommend all of Rex Stout's books very highly.
Enjoy and Be Blessed.
Diamond

I cannot remember when I first read a Nero Wolfe book. I remember browsing in a local bookstore and I would have been in high school. The bookstore is long gone and I am getting close to retirement age so it has been a few decades. Despite the passage of time I still enjoy picking up one of Rex Stout's books and being transported back. To enter Wolfe's brownstone on West 35th Street, not far from the Hudson River. To spend time with Wolfe and Archie Goodwin, his assistant and legman. Nero Wolfe is an eccentric genius who rarely leaves his residence opting instead to send Archie on errands. Wolfe's travels are limited primarily between his plant room on the third floor with the orchids, his office on the ground floor, or the dining room where he enjoys the gourmet meals prepared by his personal chef, Fritz Brenner. There are occasional visits to the kitchen where he and Fritz confer on a recipe. In And Be a Villain it is 1948 when you could get a hot dog or make a phone call for a nickel. And people listened to radio programs.

Having just completed the income taxes Archie informs Wolfe that they need money and Wolfe needs to do some work. The case Wolfe chooses to solve is a murder that took place on-air during radio talk show host Madeline Fraser's program after drinking a glass of the sponsor's beverage. He sends Archie to convince Fraser and the program sponsors to hire him to solve the case and end the bad publicity. At one point Wolfe would seemed to be inclined to let Inspector Cramer, Sergeant Purley Stebbens, and the NYC Police Department do the work with Wolfe providing some clues to point them in the right direction. But then Wolfe gets down to work. You know when you have reached this point in a Nero Wolfe story because he sits in his custom built chair and pushes his lips out and pulls them back in. He can sit like that for 12 hours without interruption ... except for meals of course. Until he has solved the case and knows the identity of the murder. The suspects are gathered together in Wolfe's office where he presents the facts and identifies the murderer. Being a genius he makes it look so obvious.

First, let me just say that when I was 16 and read this I never even registered that Archie Goodwin is ageist. At 29, his comments about no women over 30 being worth a look gave me a strong desire to give him a good "talking to." Anyway, on to the book. Honestly, And Be a Villian: A Nero Wolfe Novel disappointed me. I will re-read at least one more of Rex Stout's books, but I have a terrible suspicion that the Nero Wolfe series will go on the list of things that didn't hold up for me over time. Sad, really.

Never have I downgraded a book 2 stars for ONE sentence before; but:
Archie: "I am not incapable of using force on a woman, since after all men have never found anything else to use on them with any great success when it comes right down to it..." -- Really, Rex? Really?

This sentence was so offensive, that I would have downgraded any other book automatically to 1 star. It is, however, Rex Stout's Nero Wolfe series and as such I can't go below a 3 as much as I am turned off by the violent misogyny. (There's something about his books that is simply addictive... maybe the brilliant dialogue, vividly constructed characters, realism of the portrayed historical era, etc).

I give this one five Nero Wolfe sized stars. I love this series and I'm savoring them as my "go to" when I need a guarantee of a book that will keep my rapt attention and bring me out loud laughs. Solid, all the way around! We also get a teaser of Zeck- Nero's nemesis! You can read Rex Stouts books in any order, but I heard that you would want to read 13-15 sequentially, for this reason.

While solving the murders in this book, Wolfe crosses paths with a master criminal, who figures in the next two books as well as this one. I'm looking forward to seeing what happens next.

This book was the perfect antidote to readers malaise. After finishing a Nobel Prize winner's dense (and seemingly endless) novel, I knew I needed to return to an old friend and that was a Nero Wolfe mystery.

I have probably read this book five times, but I never tire of Nero Wolfe's grumpiness, Archie's cheekiness, and Fritz's cuisine (I am now absolutely longing for corn fritters!).

Stout's Arnold Zeck novels are among my favorites of the many Nero Wolfe mysteries; he is akin to Sherlock Holmes' Professor Moriarti---the evil genius who challenges our hero from time to time. This short novel is the first of three in a Zeck trilogy that will be my Christmas reads.

I couldn't think of anything more perfect to give myself for Christmas than a triple dose of Nero Wolfe and Archie Goodwin.

Post Script: I just finished reading this book for the ___th time. It just never grows old. It is so rare to find a book that is both absorbing and offers "laugh out loud" moments. The repartee between Wolfe and Archie is so well-written that I find myself chuckling out loud. Rex Stout created such vibrant characters, I really admire him. Series fiction is successful based on the bonding of the reader with the principals and I am a life-long friend of Nero Wolfe and Archie Goodwin. Satisfactory, indeed.

Was recommended to me as witty, but I didn't it find it particularly so. It was my first Rex Stout and it was OK, but I don't really see what the whole underlying Nero Wolfe set-up adds to the genre.