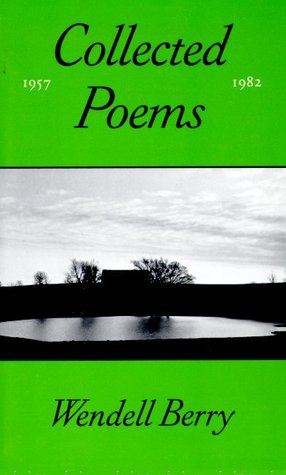 I'm no poetry buff, but this collection includes the only poem that's ever ripped my beating heart from my chest and made me want to run naked through the streets yelling "Enough of this hurried nonsense, go plant a tree for #%*'s sake!" (Manifesto: The Mad Farmer Liberation Front)

A Warning to My ReadersDo not think me gentlebecause I speak in praiseof gentleness, or elegantbecause I honor the gracethat keeps this world. I ama man crude as any,gross of speech, intolerant,stubborn, angry, fullof fits and furies. That I may have spoken wellat times, is not natural.A wonder is what it is.

Travel by your spirit into the future where there are no torture chamber farms filling the landscape anymore. Hallelujah. Notwithstanding my strong ethical reservations about some of the subject matter and the lessons drawn therefrom, I would still consider this a collection worth reading. I just disagree with the poet's entire stand on existence and animal existentialism. But nice words.

Flawless, moving poetry. Endlessly thought-provoking, yet immediately accessible. Go to a bookstore, pick this book up, and just flip through until one catches your eye. Read it twice. Here's one of my favorites:

Late in the night I pay
the unrest I owe
to the life that has never lived
and cannot live now.
What the world could be
is my good dream
and my agony when, dreaming it,
I lie awake and turn
and look into the dark.
I think of a luxury
in the sturdiness and grace
of necessary things, not
in frivolity. That would heal
the earth, and heal men.
But the end, too, is part
of the pattern, the last
labor of the heart:
to learn to lie still,
one with the earth
again, and let the world go.

Perfect poems for the country. Nice to watch a poet's writing develop and themes evolve over half a lifetime. Wise words...

Immaculate poetry from an earthy pen, if ever there were the culmination of the "high art" of words and the "low art" of farming, it is to be found here in the writing of Wendell Berry. Whereas Berry's poems is only the latest of his works that I have completed in the preceding months (following Jayber Crow and Imagination in Place, it is one of the first I picked up, catching a lonely used copy at the University of Chicago's library booksale one day last spring.

My encounter with Berry starts off with a critical weakness: of all the literary forms of art, poetry is the one I understand the least. I recall how during MAPH a typical literary course would begin with a set of readings in poetry (say, Yeats for Irish Modernism, Baudelaire for Aestheticism & Decadence, or Wordsworth for Wretchedness), and how feeble I felt approaching these texts. Poetry has this unique power to unman us, especially those of us who tend (as I do) toward analysis, critical engagement, etc. I quickly learned to treat poetry with a foreign type of skepticism, unsure of how I ought to engage, unsure of how I ought to read. For Christians, this often occurs when theologians and pastors encounter the Psalms or the poetic portions of the Prophets - they simply resist our rationalistic platitudes.

But Berry eases you in, even if you are a foreigner to the world of poetry. This collection, well selected and edited, even eases you into Berry's poetic style, as his voice matures from 1957 to 1982. The early poems are often lackluster or overly-sentimental, but they still usher the reader into the world of Berry's Kentucky farms and rivers. There is a sedate holiness to it all that beckons like a lover, at first coy and shy, later passionate, later still mature and knowingly. One enters into a romance with the poetry of Wendell Berry.

All the while, Berry is teaching his reader: he is teaching about farms and soils and weather, he is teaching about Creation, Fall, and Redemption, and he is teaching, perhaps most metapedagogically, of poetry, of the power of words, and of the purpose for a robust aesthetics. There is no room for those half-hearted expressionist poems that have clogged our ears for nearly a century, here Berry grounds us in the earth and in the world and fills our bellies with good, rich, nutritious food. One feasts at his table as a farmer does for "breakfast," before the day's work begins.

To pinpoint any one exemplary poem would be a mistake; they all flow into one another (especially in the latter three subdivisions) with remarkable ease and beauty. The famous "Mad Farmer" poems are particularly poignant, suggesting both revolution and tradition in the same voice (thus, perhaps, the titular "madness"). Any and every reflection on marriage in general or Berry's marriage to Tanya in particular are diamond gems of poetry, far greater than any of the nonsense written on the subject by a wide variety of folks over the past centuries. Moreover, Berry's work, taken in whole, speaks to a world-that-is-not which dwells alongside the world-that-is, and it is sometimes difficult to discern which is which. Is this world we live in, full as it is of skyscrapers and strip mining, the real one? Or do we live in a fantasy after all (and a bad one at that)?

This is also profoundly Christian work, of the caliber that no writer whose work gets sold at "Christian Family Stores" has ever touched, and it is more the pity, since I doubt Berry himself would be sold in such stores. (He is in good company, as several profoundly poetic Christian rappers are also not sold in those stores, and they represent some of the best poetry in the American Christian world...) The whole thing hums with the Holy Spirit and makes for a good companion (as I have suggested elsewhere) to theologian Walter Brueggemann's landmark The Prophetic Imagination.

Other than being a masterpiece, I will add that this collection of Berry's poems has encouraged and inspired me to begin reading more poetry, a genre that, as I mentioned earlier, I had left very much alone until now. Now, I look forward to diving into the mess and beauty of these glorious words.

Wendell Berry writes with a weight. Sometimes it is so great I feel the page struggle to keep the ink from falling through into the ground, other times in the same poem, and even line, I watch the page struggle to prevent the letters from taking flight around the room. His perspective zooms me in to see the cleaving of dirt by the roots of the trees and spring flowers, and then I am rushed out to view the fractal dance of all life, the dead and living flowing in circles of desire, departure, return and rest. Work is given its proper value, and hued with shades of urgent cantankerousness, and joyous duty. Rest is found in the strangest places, which when considered, give peace to brooding theologies. I am thankful for Berry’s earnest curiosity, and disciplined devotion to participation in life. He does it well. It is a gift that he records it so deftly. I am sure he knows and doesn’t know he is my friend.

This book of collected poems is a go medicine for those who have been infected by the breakdown of community and the mobility of people in postmodern times. Berry writes magically of place in such a way that you want to put down roots. He also exposes the interrelated nature of relationships with God and one another. His famous Manifesto: The Mad Farmer Liberation Front is worth the price of the book but there is more so much more that will move you. The sense of life's mystery is explored in the collection in a way that only poetry can.

Before even reading it, I gave it a premonitory five stars. I was so right. I just love Wendell Berry. He makes me feel good, and he's got just the right balance of anger and peace and beauty. What an inspiration.

Although I have not read quite all of the poems in this collection, I read most of them. I am fairly certain that in my younger years I would not have appreciated the poetry or the themes, but at this point I found both wonderful and full of wonder.