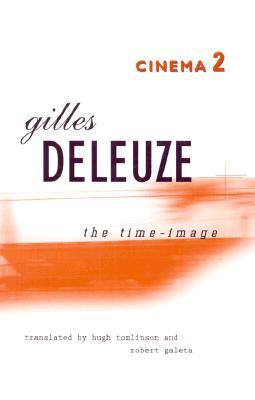 Cinema 2: The Time-Image brings to completion Gilles Deleuze's work on the theoretical implications of the cinematographic image. In Cinema 1: The Movement-Image, Deleuze proposed a new way to understand narrative cinema, based on Henri Bergson's notion of the movement-image and C.S. Pierce's classification of images and signs. In Cinema 2, he explains why, since World War Cinema 2: The Time-Image brings to...

1989 by University of Minnesota Press

Quotes From "Cinema 2: The Time-Image"

"The historical fact is that cinema was constituted as such by becoming narrative, by presenting a story, and by rejecting its other possible directions. The approximation which follows is that, from that point, the sequences of images and even each image, a single shot, are assimilated to propositions or rather oral utterances [...]."
14 likes
"The link between man and the world is broken. Henceforth, this link must become an object of belief: it is the impossible which can only be restored within a faith. Belief is no longer addressed to a different or transformed world. Man is in the world as if in a pure optical and sound situation. The reaction of which man has been dispossessed can be replaced only by belief. Only belief in the world can reconnect man to what he sees and hears. The cinema must film, not the world, but belief in this world, our only link."
4 likes
"We must believe in the body, but as in the germ of life, the seed which splits open the paving stones, which has been preserved and lives on in the holy shroud or the mummy's bandages, and which bears witness to life, in this world as it is. We need an ethic or a faith, which makes fools laugh; it is not a need to believe in something else, but a need to believe in this world, of which fools are a part."
2 likes
"Ophüls’s images are perfect crystals. Their facets are oblique mirrors…And the mirrors are not content with reflecting the actual image, but constitute the prism, the lens where the split image constantly runs after itself to connect up with itself…On the track or in the crystal, the imprisoned characters bustle, acting and acted on…Crystalline perfection lets no outside subsist: there is no outside of the mirror or the film set, but only an obverse where the characters who disappear or die go, abandoned by life which thrusts itself back into the film set."
1 likes
"The cinema must film, not the world, but belief in this world, our only link. (…). Restoring our belief in the world – this is the power of cinema"
0 likes
See All Quotes From "Cinema 2: The Time-Image"