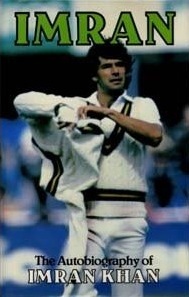 Imran: The Autobiography Of Imran Khan

Pakistan's current prime minister was once cricket's ultimate glamour icon.A formidable fast bowler,good batsman and a captain,who instilled a belief to win,in a team of perennial under achievers.

This is an interesting autobiography,published when he was at the height of his career.It is a candid one too,as he acknowledges that when he was initially picked to play for Pakistan,it was because of nepotism.(His cousins Javed Burki and Majid Khan had already played for Pakistan and helped him get in).

He had a forgettable Test debut,as a trundling medium pacer,who was thrashed,and soon dropped.He stayed back in England to study at Oxford,and talks about how lonely and homesick he was, during the cold English winters.

But soon,he was not playing for Pakistan,but for Australian TV tycoon,Kerry Packer.Packer had paid the world's leading cricketers hefty amounts to play for him,and not their countries.

After two years,and a lot of controversy,Imran was back to play for Pakistan.He played a big part in a series victory against arch-rivals India.The following year,he remained injured on the Indian tour,was linked to Indian actresses and was crucified back home,as the series was lost.

By 1982,he was captain,following a players' revolt against Javed Miandad.Captaincy raised his game.He once again destroyed India's formidable batting line up in 1982,sealing a series victory by capturing 40 wickets.

But he paid a heavy price,suffering a stress fracture,that would keep him out of cricket for two years.This book is an account of his career,till that point.(His career would continue for another decade).Entertaining,and very readable.

Thankfully,this book contains nothing about politics,which would become his second career.

There's nothing outstanding about his life except one cricket match victory.

This one was written way before he won us the world cup in 1992. I read it ages ago in my early teens. I'd like to read it again someday and compare it to something he must have written after 1992, Shaukat Khanum hospital and his formal entry into politics.

Its a very very good book. He wrote it in 1983 I think. Whoever took my copy from me, please return it. Its a rare book. I love it.