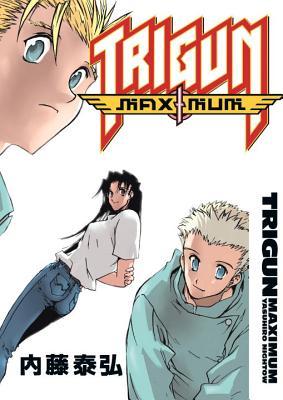 A good bunch of backstory, fleshing out characters, greying the morals - which is great. On the other hand, this sort of superpowered DBZ-esque slugfests can't hold my attention nearly as well as when Vash fights other humans.

Slowly but surely, the flow of the story arcs is improving. I wish it hadn't taken me nearly a year between volume 4 and 5, because it is finally starting to make sense. While I did enjoy the anime, it left a lot of questions for me, questions which I'm finding answers to in the manga. I hope that the pace and cohesiveness continue.

Also, here is a mild SPOILER alert, Volume 7 seems to be the divergence point between the anime and the manga, at least for the main plot.


MAJOR SPOILERS: OMG, KNIVES' HAS AN ACTUAL BACKSTORY FOR WHY HE IS SO INCREDIBLY MESSED UP AND AGAINST HUMANS!? WHAT!? The anime just made him psychotic without a real reason. He was deprived of his right to be a meaningful villian, at least, that's the way it felt to me. This is what happens when humanity finds a new lifeform and their first impulse is to dissect it and then some of it's relations find out what you did. They go insane and start trying to commit genocide. ALSO, HUMANS CREATED THE PLANTS!? HOW WAS THAT ANSWER NOT IN THE ANIME!? It's like they were being deliberately obtuse! I do hope the manga actually goes into the how of creation a little bit, right now it feels a little obtuse too, but at least I'm getting something out of it.

https://bookwayfarer.wordpress.com/20...
Rem warns the 2 boys to stay quietly strapped in, regardless of what they hear. The crew wakes up from their pod sleep, walking to where Rem’s looking as diagnoses finish calculating, the crew only having to sign off, this 3 yrs since their last wakening. Rem doesn’t let on the boys’re there, but she does confront whom she thinks is the culprit, Knives whom guiltily responds, then the captain seeing them, and learning they’d developed over the year. Conrad asks the 2 boys if they had affection for Rem, whom planned to take them to sleep along with her when her duties were done.

The boys’re earnest about their love and he’s onboard with keeping them with her. The 2 boys see a girl then a room suspiciously clean, and when the 2 look at the computer, they see files in a folder called Tessla. Soon they learn Tessla’d been the boys’ predecessor, whom now is in a tank pod looking a bit changed in a plant way, and decomposed, Tessla’s project ultimately closed. Knives passes out, and Rem desperately asks to be let in, when Knives revives he sharply asks if she planned to continue with them where they’d left off with Tessla.

When Knives wakes again, it seems he’d forgotten what they’d chatted about before. So, Rem goes over the Tessla project again, Conrad and she disagreeing with the experiment morally. Rem regards whether Knives is forcing himself to take this all in calmly, and when the 2 boys walk off, Knives states how being scared seems pointless. Everything seems comfortingly normal between the 3 again, until Knives takes a late night look at the computer file again, and bites his fingertip to bleeding profusely.

Later, older Knives seems to transform and now has weird-looking wings, a new time of chaos to come. Next, Vash’s mere presence helps diffuse a sheriff from killing someone unnecessarily, and allow them to walk out of town directly, after which Vash and Wolfwood go to the bar with the free men to drink, Wolfwood declining for having some pondering to focus on. Then, a satellite base starts noticing something is causing multiple satellites to go offline, which’ll then make universal communication dead. Then, Vash states he and Wolfwood were heading out, but the time he spent with them’d be unforgettable.

They walk through the front entrance, since Vash knew Knives’d be able to sense him, Wolfwood getting a violent and singular impression of getting killed by chains coming from everywhere, he not sharing with Vash since he hadn’t seen it. Then, right before Vash continues to meet Knives, Wolfwood realizes Vash’d seen the vision, as well, he next having to face off with 1 of Knives’ underlings. When Vash and Knives rejoins Wolfwood and the man-looking woman, Elendira, Knives sees the change in Vash and makes him think he’ll now see why they and humans could never mix being due to the blackness of their decay, Knives also wrongly estimating Vash was weaker than himself, and then angered when Vash shares how he still plans to attempt peaceful coexistence with humans, even if they lash out violently.

Despite his bro’s typical bratty-ness, Vash declares Knives wouldn’t get his way, this making Knives conclude they couldn’t agree, and their only choice being to meld, he saying Vash’ll at least live through him. Vash almost overpowers him, but Knives power knocks him out, leaving Elendira to tie him up as he readies to open up darkness which hadn’t gotten a breath since time’s birth.

Cute, to the next!

The intensity is picking up as Vash heads off to confront Knives...

Unfortunately, I was still a little confused as to what was going on, but its getting better, so that's a plus!

Awesome learning about the backstory. This is wrapping up to such a climax...

This volume contains a lot of back-story, which helps add some coherence to the story arc involving Knives and Vash.