Home › Authors › Paul Sabatier › The Road To Assisi: The Essent... 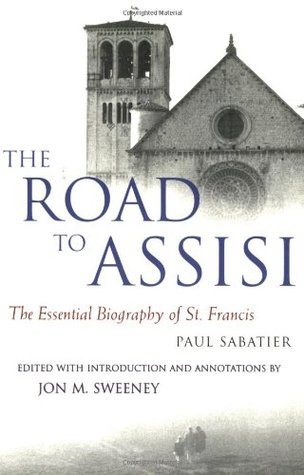 The Road To Assisi: The Essential Biography Of St. Francis

Pretty good book that got better after a sort of slow start. For the first few chapters, it seemed as though the author was getting sidetracked writing about things that weren't all too relevant in regards to Francis' life. But that was just at the beginning.
What I liked best about the book was that it didn't just glorify Francis. It also explored some of his flaws as well. Although I admit that I do think this was probably done completely unintentionally by the author.
In many areas of the book, the author makes Francis seem somewhat bossy and possibly even power-hungry in some respects. Raising his voice to members of his order. Barking commands. Where to sleep. What to eat. When to eat. What to clean. Where to preach. What work to do.
Whoaaaaaa. Easy there boss man. Have some wine and relax.
It also appeared very important to him to have disciples in the same manner of Jesus, which, to me, comes across as mildly arrogant as well. I mean come on, whether you had a vision of being another chosen one or not, there's only one Jesus. He has no equals.
The author also shows Francis' hypocritical side. Anybody who knows anything about Francis knows he is a devout lover of animals. There are stories of him talking to birds and wolves, and refusing to stomp on worms or spiders. He even forbid his followers to have books because a great amount of sheep-skin was used for paper. Yet he was a meat-eater and even used fox-skin for warmth during a cold period.
Huh?
In similar hypocritical fashion, despite trying to emulate Jesus as best he could, there are a couple stories showing his unforgiving side, even to the point of holding a grudge on one particular individual towards the end of his life.
He told one of his disciples how criminals are always welcome in his order, yet he kicked out one of his members for failing to obey one of his orders.
My favorite story is of him forcing one of his members to consume donkey excrement as a penalty for speaking badly about one of the other members.
Hmmmmm. For someone trying to emulate Jesus in every possible way, I'm not sure if that's the way to go about doing it. I mean, I don't ever recall Jesus saying, "Hey Mary Magdalene you freaking slut, get over here and eat this sheep dung."
Maybe I'm wrong though.
With all that being said, Francis was an exceptional human being. Showing generosity, compassion and humility a vast majority of the time. And equally as brave and courageous to leave a life of luxury he was born into to voluntarily take up a life of poverty (not unlike the Buddha) while helping others, treating everybody equally and preaching Jesus' word. If everybody that walked the earth was like Francis, I think we'd have a pretty good world to live in.
But not even saints are perfect. Just like the book itself. Very good, but short of perfect.

A book about the life and times of St. Francis and his contemporaries. Sabatier wrote this book in 1894 and it was a bestseller when published. It is a well researched book that gives a vivid picture of St. Francis's everyday life and the struggles of Christian church. Maybe this is why it was on the Vatican's forbidden book list.

I craved more literal information. I have very little understanding as to why St Francis is so revered.

A well researched and edited book . A good opening and faster to the Saint

Now rather dated with annotations that interupt rather than illuminate.

This is Sabatier's original, somewhat legend-enhanced bio of St. Francis, with Sweeney's updates via sidebars and notes.

The author devoted his later life to historical writing after serving his early years as a pastor in Strasbourg. First published in 1894, this edition is wonderfully annotated by a very able religious author with an additional 100 years of research at his disposal.
This is my first introduction to St. Francis. Knowing basically nothing about him other than the well known pictures of him surrounded by wildlife, the entire book was revelatory to me.

Francis started out as a spoiled, party boy in Assisi. He ended up turning his back on his inheritance after a revelation while rebuilding a small chapel not far from Assisi.

Instead of fighting the church, he accepted the priests and pope thereby gaining their acceptance. He surrendered control of his order when he realized he could no longer govern such a rapidly growing family. He would chastise others in the order when they strayed from his ideals of poverty and serving others. He was particularly incensed when the order started building monasteries rather than living simply in huts and caves.

I became intrigued by St. Francis after visiting one of his monasteries on a recent trip. I knew some of the basics about him but wanted a more in-depth overview. This book written by a French Protestant in the 19th century fulfilled that desire. The additions of updated material by a contemporary theologian helped to clarify the text and make it more accessible. Though dense at times, the writing somewhat stilted maybe due to it's origins in a different language, it provided me with a sense of Francis's life, his journey as a Brother, and the foundation often fraught with conflict around the founding of an order that still exists today. After reading this, I can see St. Francis's influence and light shine through in our current Pope. The journey of humility and concern for the disenfranchised of the world continues.

Furthering my study of St. Francis, I decided to read a reprint of the biography by Sabatier that was published in 1894..it has been annotated with excellent historical data. Takes a look at the life of St. Francis from the perspective of the times in which he lived. One excerpt was a good example of how St. Francis lived: "On a pilgrimage to Rome, the journey was marked by an important incident. Many a time when surroring the poor he had asked himself if he himeself wold be able to endure poverty. No one knows the weight of a burden until he has carried it upon his own shoulders. He desired to know what it is like to have nothing and to depend for bread upon the charity or caprice of the passerby (p. 15)."