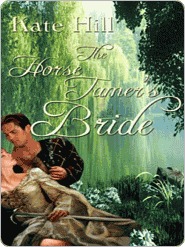 After two years Derek is ready to marry his beloved Sonja when he's called back to Scotland and disappears without a word. Just when Sonja is about to give up on him completely, he returns after being held prisoner by enemies of his family. They're certain the worst of their problems are behind them when their friend, Sir William, is nearly murdered, Sonja's brother, Wybor After two years Derek is ready to...

Quotes From "The Horse Tamer's Bride"

See All Quotes From "The Horse Tamer's Bride"