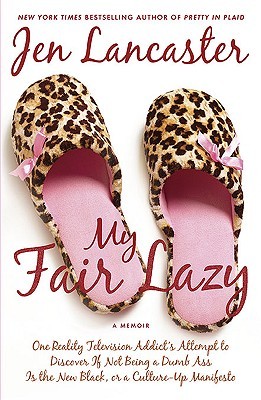 My Fair Lazy: One Reality Television Addict's Attempt to Discover If Not Being A Dumb Ass Is the New Black, or, a Culture-Up Manifesto

It's a JENaissance! The New York Times bestselling author of Pretty in Plaid gets her culture on. Readers have followed Jen Lancaster through job loss, sucky city living, weight loss attempts, and 1980s nostalgia. Now Jen chronicles her efforts to achieve cultural enlightenment, with some hilarious missteps and genuine moments of inspiration along the way. And she does s It's a JENaissance! The New York Times...

Quotes From "My Fair Lazy: One Reality Television Addict's Attempt to Discover If Not Being A Dumb Ass Is the New Black, or, a Culture-Up Manifesto"

"I never sleep on the plane. I have to be awake and using my mind power to keep it in the air"
9 likes
"I love the French and Italian church paintings from the Middle Ages. But I'm also interested to learn more about who was the first to make the leap from religious art to secular. That couldn't have been a small feat. Who was brave enough to say, " You know what? Enough of Jesus. I'mma paint me this here bowl of fruit and then I'mma paint my girlfriend... naked!"
5 likes
"I mean, six years ago my electricity's being cut off and my car's getting repossessed and I'm being evicted from my apartment, and now I'm all "Yeah, havin' dinner with Rudy in the Hamptons, what of it?"
5 likes
"I tried, it was hard, I quit, the end. Story of my life."
4 likes
"I feel like my takeaway from tonight is that it's okay to love shitty television, provided that you make an effort to appreciate other kinds of entertainment."
4 likes
"Reality television gave me an amazing feeling of moral and intellectual superiority without actually requiring any effort past moving the dogs to find the remote."
2 likes
"I'm the person who says every single thing she thinks, sometimes to others' amusement, and almost always to my detriment."
2 likes
"I bet if I spent less time with the television and more time pursuing activities that enhance my life and expand my knowledge, I won't freeze up in business or social situations."
2 likes
See All Quotes From "My Fair Lazy: One Reality Television Addict's Attempt to Discover If Not Being A Dumb Ass Is the New Black, or, a Culture-Up Manifesto"