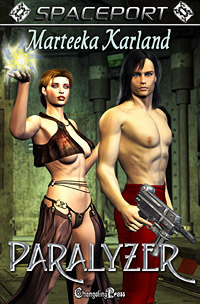 Starla, a Paralyzer Mage of the Vastus, has been assigned to be bodyguard to, of all people, a rock star. After an attempt on Tygor Gold's life, she finds herself on Spaceport Adana as, in her mind, a glorified babysitter. What she doesn't realize is she is but a pawn in the greater scheme of things. Tygor has his own magic and reasons for not joining the Vastus as a Mage. Starla, a Paralyzer Mage of the Vastus,...

See All Quotes From "Paralyzer"