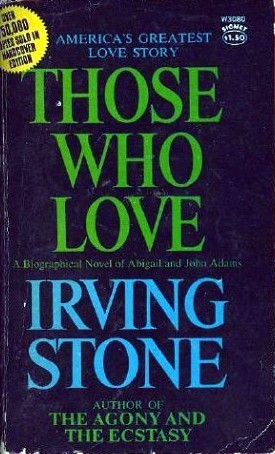 Those who love; A Biographical Novel of Abigail and John Adams, Irving Stone

Those Who Love is a biographical novel of John Adams, as told from the perspective of his wife, Abigail Adams. It was written by American author Irving Stone.

The true story of Abigail Smith and John Adams, who met and loved and married and became leading protagonists in events which were to change the whole concept of the Western world.

This biographical novel of Abigail and John Adams was the #6 bestseller in 1965. I enjoyed it for the history of the Revolutionary War, the creation of America as a country, and the difficulties of our new government over the next decade. The political infighting felt similar to what we have going on today.

I liked the way Irving Stone depicted Abigail and John. They were a Puritan couple who saw eye to eye on the dream of creating a democracy though they had tremendous challenges. That said, it is a clearly pro-America rendition of our new country with slavery and Indian issues glossed over. As soon as I finished the book I picked up my copy of Howard Zinn's A People's History of the United States and started reading.

Due to the fact that I have been writing more than reading this summer, I have to admit that I made a poor choice when I picked this book for my summer read. This was due to the size and slow pace of this historical fiction novel about John & Abigail Adams.
First published in 1965, it is quickly evident that the book and its subject matter were thoroughly researched by the author, Irving Stone. My main complaint is where the author chose to focus his attention. This book is quite long...nearly 650 pages. It is not a quick or easy read. While I give credit to Stone for staying as true to the style of the language of the day, I could have done with less description. By the end of the story, I was almost glad John Adams didn't win his second term as I did not wish to devote any more time to Stone's story.
I've read quite a bit on John and Abigail Adams through the years. They were, indeed, very much in love and very much a part of the making of their country's history during their lives. But, for me, the real John and Abigail Adams were missing from this book. I found Stone's characterization to be too one dimensional. I didn't read about the controlling, irritating side of John Adams. Stone's John Adams, I imagine, is more likeable than the historical one. I also didn't read about the fiercely outspoken, almost possessively protective Abigail. Stone's Abigail was much more soft spoken than her surviving letters to her husband and Thomas Jefferson suggest of the historical figure I've always imagined her to be.
One of the biggest disappointments in the book was, what I perceived as the glossing over of the two greatest occurrences of John Adams' Presidential administration...The XYZ Affair and especially The Alien And Sedition Acts -- the latter of which still serves as a stain on Adams' otherwise impeccable political character and most certainly led to him not gaining a second term. I felt Stone spent more time explaining the styles of furnishings and types of clothes the Adamses favored instead of matters of greater import.
To gain a more thorough and readable understanding of these otherwise fascinating historical figures, I'd suggest reading David McCullough's magnificent "John Adams" or Cokie Roberts, "Founding Mothers". It's a shame that this book, in my opinion, was a waste of time. I would have been better served reading Joseph Ellis' telling of the Adams' story in his book, "First Family"...a book I planned to have read, but will now need to be put on hold. "Those Who Love" has effectively led me to need a break from John & Abigail Adams as well as from the time period in which they lived. This is an unfortunate consequence of having read Irving Stone's book, because from what I've read previously about John & Abigail Adams, they deserved a book to be more worthy of who they really were. FINISHED 8-25-12

I loved this book. Cannot imagine living the life of Abigail. She was John's backbone, who would have known? This book started me reading many more about the American Revolution and the founding of our country.

Another great one from Irving Stone. I like his pro-American, pro-founding father, but honest, take on history. I learned so much about the American Revolution and the birth of the country. Felt like I was there!

I read this some time ago, but it is one of my all time favorite books. I love the purity of the love story between John and Abigail. They showed amazing resiliency in the face of difficult trials. And became one of the most influential couples to ever grace our nation.

I really enjoyed this historical novel about the birth of our nation with the central characters being John and Abigail Adams. I learned a lot, and I found their lives fascinating. John and Abigail were honorable and honest and they sacrificed much to see our democracy come to fruition. Often, their contributions went unnoticed and unappreciated. This was a great story worthy of being read.

While it is a fictionalized account of the relationship between Abigail and John Adams, it has been thoroughly researched and is accurate as far as the events in their lives are concerned.

John and Abigail Adams were true partners in life. Their letters to one another showed that John considered not just his wife, but his best friend, his intellectual equal and his greatest confidante.

The book starts with the meeting of Abigail and John and their courtship in spite of her mother's initial disapproval. It centers mostly on Abigail who had the burden of making it all work while her husband pursued his political ambitions. They spent long periods of time apart while John was serving in Congress or in Europe. Quite often she had to do her best to make ends meet while John was not paid or belatedly paid by the government for his work.

It's a well written book and I can enthusiasically recommend it to anyone interested in the life of Abigail Adams.

I absolutely adored this biography of John and Abigail Adams. The novel was weighted more heavily toward Abigail's view of the events that surrounded their lives, which I really loved. She was every bit as remarkable as her famous husband. Their sacrifices for their country were not on the battlefield, but were every bit as necessary to the survival of a young nation. It's too bad the book is out of print, because it is beautifully written and gave me a renewed respect for the founding fathers of this nation. I highly recommend it to anyone who get their hands on a copy.

I always love getting a little truth and history with my novels, and this one doesn't disappoint. Learn more about John and Abigail Adams and discover that behind very successful man, there is a woman who loves him.