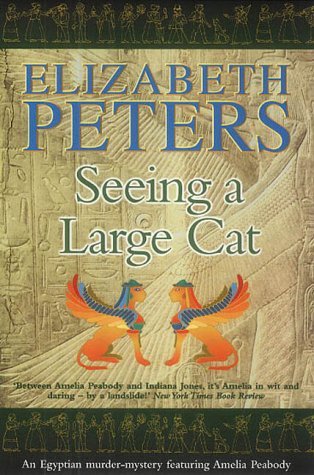 More fun and games with the amazing Amelia and her entertaining family!

This episode is set several years after the last book and Ramses, Nefret and David have all grown up considerably. They are all heavily involved in the shenanigans in this story and with the aid of a separate manuscript we learn a lot more about them and what they get up to behind the scenes. More than even Amelia knows!

Sadly we have had to say goodbye to the cat Bastet which was obviously going to happen sometime since cats do not live forever. He was one of my favourite characters! There is a replacement in the wings but Bastet's shoes (or paws) prove hard to fill!

As usual Amelia gets herself and everyone else involved in detective work. Emerson blusters and longs to get back to digging up tombs but ends up helping his wife instead. Nefret and Ramses bicker and David just gets on with things. There is an entertaining séance, some murders and the usual near death experience for Amelia.

All good fun and I am looking forward to what happens next!

Finally the children are old enough to make their own contribution to the series. Ramses is 16 and he and David, who is around 18, have just finished a stay with their friend the sheik where they were celebrating making the journey into manhood. Neferet is 18 or 19 and she is determined to do everything that the guys are doing--including smoking, drinking and learning to ride a horse like them. This episode deals with the challanges of all three young adults to live in both worlds of british society and egyptian upbringing Emerson style. As always there are mysterious circumstances and events, a mummy, tomb excavations, a looney man, a vicious murder, new characters introduced and old characters returning., I love how EP sheds light on the children's point of view by quoting from manuscript "H". I love also how the whole family sits down together to try and figure out the mystery and even though they are supposed to be working together, Amelia always tries to go off and face the villain by herself. Ramses is hopelessly in love with his foster sister, Neferet and his foster brother David tries to understand why Ramses doesn't just tell her. Great Story--ending made me cry.

If you're a gamer, you'll know what I mean when I explain that Ramses suddenly turns from a DNPC into a PC in this book. What's more, he's a PC with as many points as his parents, who have been accumulating XP for eight books.

In particular, I admire how Ms. Peters has handled the transformation. The Manuscript H might be a slightly precious device but it offers a fairly seamless transition into another POV, a trick in a series so deeply dedicated to a first-person singular narrative. It also takes care of the supposed journal-like nature of the books.

Furthermore, sending the boys off to the sheik to learn to "fight and ride and become leaders of men" is a great way for Ramses to go from awkward boy to a fairly impressive action hero. I love his entrance at Shepherds -- even upon repeated readings, it's a great scene.

Also, Ramses moves from love-struck boy to literary heart-throb. Watching the women battle over his affections while he moons (stoically, of course) over the irritating Nefret is an excellent way to impress upon us his sudden transition from kidnapper bait into active adult.

Finally, Ramses rescues his mother. A woman who very rarely needs rescue. He takes a life to do it. The whole climax is quite thrilling, in a totally pulpy way. It also indicates, quite neatly I think, the transition to the much much darker and more fraught books that follow. The cheerful Victorian caricatures give way to a much more nuanced and grim (but still delightfully pulpy and fun) wartime mood.

I suppose I should confess. The first book I ever picked up of this series was Falcon at the Portal (more about which at that review). I fell madly, wildly, and deeply in love with Ramses before the fifth chapter. Having then gone back to start the series and find the object of my lust pictured as a little boy was very disconcerting, to say the least. I was thrilled when I picked this one up and discovered that the action hero of my dreams had finally arrived on the scene.

I love this Amelia Peabody book. In this story, Amelia and her husband Emerson are going on a dig with their adopted daughter Nefret. On the way they meet their son Ramses and nephew David. An English gentleman wants to hire Amelia as his daughter's bodyguard, but she refuses. The young lady, Dolly, is a trouble-maker and likes to get herself in trouble. They discover a woman lying in a tomb, and have to discover who she is and how she got there, and why is someone out to get Dolly? Great fun read.

This is my least favorite of the series so far, but that's based on a personal prejudice - I dislike anything to do with seances, and the entire plot of this book depends on them. I also don't like plots that require someone to be a total idiot, which Donald is. lol And then, to take a character who's been cheating good people and somehow make that OK doesn't work for me. So there are several strikes against this one.

Still, seeing the three young people growing up and interacting was great fun. Peters does a lovely job with them, they're realistic and delightful. Also, I love books with smart, active heroines and now we have two of them, Amelia and Nefret! And I'm always happy to get more Cyrus. Plus I thought the manuscript "H" idea was inspired. So I still liked this one, despite the negatives.

Upon re-listening I can basically reaffirm my original impression. To my mind this is one of the weaker entries in the series. Still it has some lovely scenes, too, especially between Ramses, Amelia, and David.

April 2019: Yet again I find myself in love with the sweep of characters differentiated by Rosenblat, and this is a particularly lovable mystery with bits of previous cases smushed in, the introduction of Catherine, and Teen Love. June 2012: Reread on audio, with Barbara Rosenblat narrating, as always a pleasure. These characters are so real to me after reading them for 25 years that as usual I had dreams about them after finishing the book. Yay!

Seeing a Large Cat marks a change in the narrative style of the Amelia Peabody series by Elizabeth Peters. Starting with this volume the mysteries balloon from two hundred fifty pages to almost five hundred pages. The main source of these extra pages is the "manuscript H" which is apparently written by Walter "Ramses" Emerson.

Over the course of the second half of the series (where Ramses, Nefret and David are adults), the writing style of "manuscript H" improves as does the manner in which it is integrated into the over all narrative. In this first attempt, though, the "manuscript H" inserts interrupt the flow of the story and stall the start of the actual mystery until page 125.

The mystery itself is rather simplistic once all the family drama of the early days of the rivalry and romance of Ramses and Nefret and the historical background of 1903 Egypt are pared away. A woman is found in an unknown side tomb of KV-20 (called tomb 20-A in the novel). The woman is mummified but her modern dress quickly gives away the fact that she was only recently murdered. Eventually the plot progresses enough for Amelia et al to investigate, get in trouble, need rescuing and finally escape of their own accord. Unfortunately these action scenes are buried under long dull passages. There are times when Amelia Peabody needs to be gagged.

A huge hindrance to the pacing is the tedious attention to detail. Peters (Barbara Mertz) is a trained Egyptologist and probably knows the Valley of the Kings as well as I know my local neighborhood. It helps to come to these later novels with a basic knowledge of the history (both ancient and recent) and geography of Egypt.

The other problem with the novel is Peter's growing love affair with her characters. She has become so enamored with the Emersons and their kith and kin that every single character has to be lovingly followed and described. This love affair only gets worse as the series progresses.

This was my first audio re-read of this 9th entry in the Amelia Peabody mystery series. This book was just wonderful! The Emersons are back in Egypt and face a number of mysteries, some darker than others. Ramses, David, and Nefret are now teenagers, and with this book we're introduced to the first "Manuscript H," a portion of the book told from their perspective.

I liked this much more on re-read (my first) than I did the first time I read it. The ending definitely hints at darkness to come, with one of Amelia's dreams.

The series should not be started here, but back with the first: Crocodile on the Sandbank. But for me, this entry is a definite DIK, and an A, or five stars here.

NOTE: Second re-listen of this completed on 06/09/19. I definitely agree with everything I wrote above. Now on to the the next three books, called the "dark trilogy" by some, before the fantastic rewards of He Shall Thunder in the Sky.

NOTE: July 29, 2020, Third re-listen. The hints of dark things to come in the following three books are just as strong as before. But I still love this book. On to the next!

"For the ancient Egyptians, to dream of a large cat meant good luck."

Another very entertaining archeological adventure in Egypt with Emerson and Peabody, now (in 1903) accompanied by an entourage of lively teenagers. I've enjoyed all of these books, but I think this is one of my favorites so far.

Until now the books have been written entirely in first person from Amelia Peabody's point of view, but this time the author includes a few scenes written in third person from Ramses' point of view, ostensibly obtained from a newly discovered manuscript (as the rest of the text is purported to be from Amelia's journal). It's fascinating to see the rest of the family from outside of Amelia's perspective. Haven't you always wanted to know what Rames thinks about his mother?

Peters is doing a great job of keeping this series fresh, and I look forward to the next book.

Since summer of 2016, listening to the entire (and most excellent) "Amelia Peabody" series (this is #9) by Elizabeth Peters in audiobook form. Getting them from "interlibray loan" and also (when they can't be found from a library) downloading them from audible.com. I would reccommend the wonderul stories to any mystery lover -- but start from the beginning of this series to benefit fully from the character and plot developments as they occurred over the decades. [I found this a partcularly involving book in the series, a real turning point for the author, when she began to delve quite deeply into not only the intricate plot but also into the personal lives of the characters. It only makes me even more anxious to continue with this series -- the next volume has already been ordered through interlibrary loan.]