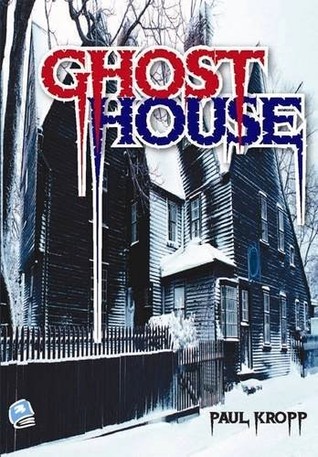 I am thrilled when literature is Canadian. Until discovering adult paranormal authors just now, I was accustomed to resorting to children’s books for it. “Ghost House”, despite being mixed with competitiveness, antagonism, and the juvenile dialogue and interplay of youth stories; had the makings of a good and gripping ghost history. The presentation of Paul Kropp’s story highlighted suspense and fear entirely; whether it was a joke, or an actual phenomenon that was neither seen nor explained properly.

There is a disused house associated with poorly-remembered news items, that makes people uncomfortable to approach it. A well-to-do child offers payment to pals who will dare to stay in it until morning. A pair of brothers accepts. The best part of this whole shebang is their effort and intelligence to read newspapers they find within. They garner enough information to know what happened here, that this night incredibly happens to be the long anniversary of the former occupants’ murders, and that these gentlemen resemble them. It was a brief novel and because all of its pages were given to the jitteriness and immaturity of its demographic; it failed to dig into the great historical past that it fleetingly suggested.

With failed headphones and flashlights, gimmicks clearly for children; this story solely meant to jolt us, without any meat behind it. I was surprised to have enjoyed the story very little: over bickering, practical joking, and awful use of “have got” contractions. “Got” should only arise as past tense of “get”. The word “HAVE” suffices with nothing after it. Example: “Do you HAVE a minute, please”? No second verb is needed! I’ll be honest, this book’s dialogue was riddled with “have got” contractions I cannot stand. Mainly, Paul squandered the kids’ one act of proactive, intelligent research and his captivating cold case.

THE book I’m reading is ghost house its about Zack and Tyler who don’t belive in ghost but when there friends offer them big money they jump to take that chance. My favorite part in the book is when the two brothers find old newspapers in the house and it talks about a murder in the house.

This is one of the first books I ever read as kid. Something about it has always stuck with me. I'd highly recommend this to a new reader!