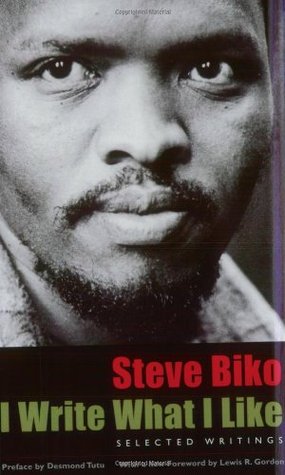 I Write What I Like contains a selection of Biko's writings from 1969, when he became the president of the South African Students' Organization, to 1972, when he was prohibited from publishing. The collection also includes a preface by Archbishop Desmond Tutu; an introduction by Malusi and Thoko Mpumlwana, who were both involved with Biko in the Black Consciousness movement; a memoir of Biko by Father Aelred Stubbs, his longtime pastor and friend; and a new foreword by Professor Lewis Gordon.

Biko's writings will inspire and educate anyone concerned with issues of racism, postcolonialism, and black nationalism.

I live in the city where he was murdered. Some people here don't like it when i voice the notion that we still bear a collective shame over this. They don't like most of the notions I voice, come to think of it. I read this book in Dublin in 1993, when I spent a year wandering aimlessly around Europe while my country burned. It's hard to believe he was in his twenties when he wrote most of these things. His thinking was way ahead of his time. I find it terribly sad how the ANC never mentions him (he wasn't an ANC man). What he said is way too important to be ignored like that.

There should be a statue of him here in this town to remind us. But no. Instead they want to change it's name to Mandela Bay, even though Mr Mandela barely ever set foot here.

A collection of writings by Steve Biko, remarkable, perceptive and articulate. Biko was an icon for those of us on the left when I was at university and developing my political thinking. Killed whilst in custody at the age of thirty, he is often regarded as one of the foremost thinkers about racism and was influential in the development of the Black Consciousness Movement. Biko was an anti-apartheid activist and African socialist. In 1968 he helped to found the South African Students Organisation (SASO). He was also involved in the founding of the Black People’s Convention (BPC). His life is depicted in the film Cry Freedom, Denzel Washington playing Biko.
Biko outlines the development of SASO and the BPC and the need for black people to organise themselves without the help or support of whites:
"Blacks are tired of standing at the touchlines of a game that they should we playing ... They want things for themselves and all by themselves"
He analyses white racism in the South African context and is critical of the role of white liberals in these terms:
"expecting the slave to work together with the slave-master's son to remove all the conditions leading to the former's enslavement"
He rejects white values as being inextricable from the culture of domination, exploitation and oppression and he argues the type of integration the liberals wanted was flawed:
"an integration based on exploitative values ... in which Black will compete with Black, using each other as rungs up a step ladder leading them to white values ... in which the Black person will have to prove himself/herself in terms of these values before meriting acceptance and ultimate assimilation, and in which the poor will grow poorer and the rich richer in a country where the poor have always been Black"
He also articulates the philosophy and rationale of Black Consciousness. The most powerful parts of the book are the two chapters at the end which are transcripts of Biko’s cross examination in court where he very clearly outlines his philosophy and political aims:
‘There is no running away from the fact that now in South Africa there is such an ill distribution of wealth that any form of political freedom which does not touch on the proper distribution of wealth will be meaningless. The white have locked up within a small minority of themselves the greater proportion of the country’s wealth. If we have a mere change of face of those in governing positions what is likely to happen is that black people will continue to be poor, and you will see a few blacks filtering through into the so-called bourgeoisie. Our society will be run almost as of yesterday. So for meaningful change to appear there needs to be an attempt at reorganising the whole economic pattern and economic policies within this particular country.’
Those who knew Biko reflect on how intelligent and articulate he was and how keenly his loss was felt.
It has been noted that Biko did not really see a role for feminism in the Black Consciousness movement. I am sure his views would have developed had he lived, but nevertheless it is worth bearing in mind.
His reflection on death at the end is telling:
“You are either alive and proud or you are dead, and when you are dead you can’t care anyway. And your method of death can itself be a politicizing thing. So I said to them, listen, if you guys want to do this your way, you have got to handcuff me and bind my feet together, so that I can’t respond. If you allow me to respond I’m certainly going to respond. And I’m afraid you may have to kill me in the process even if its not your intention.”

Steven Biko was one of the most famous leaders of the struggle for freedom and equality in South Africa. His fight was not only against apartheid, but more specifically against the ill-effects it was having on the mindset of the Africans being subjected to these cruelties. This book is a collection of essays by and interviews with the man who has been called the originator of the Black Consciousness movement. Black Consciousness was a movement designed to help Black Africans relearn to respect themselves and their culture. Years of maltreatment had created a psyche of dependence on others, doubt in their own abilities, and disrespect for their culture and traditions. Biko was controversial in that he wanted white anti-apartheid groups and black anti-apartheid groups to operate by themselves and not rely on each other. He argued that before the two groups could ever stand together, each group had to learn to stand alone. Building up the pride and psyche of the South African minorities to a point where they could take control of and change their political destiny was the concept behind Black Consciousness and there is no telling how important it was to the movement there. Biko's writings show a very sensitive awareness to the needs of his fellow men on both sides of the conflict. These essays put on display a genius in political thought and social theory, the ability to rally people around him with words, the righteousness that comes with centuries of political oppression and a lot more. Biko is a man I respect who I feel truly believed in, fought for and died for a cause. Most men that become famous for their actions are looking for fame and glory even if their publicized aims are good and noble. Reading Biko makes it clear to me he was not about himself, he was about his people.

Read once in university, I decided to re-read I Write What I Like after getting it as a gift from a friend. It remains an absolutely phenomenal collection of ideology penned by the great Steve Biko. He should have been one of the greatest post-apartheid leaders of South Africa, instead he was brutally murdered by the apartheid police. It is such a devastating thought to imagine what South Africa would have looked like if he had lived. I am so glad I re-read this because (with age and experience) I understand so much more now, now that I am trying to learn as much as I can about white privilege. Biko's writing should be studied by all whites - his grasp on the racial policies of colonisation and the subsequent dehuminisation of people of colour is remarkable and eloquent. Educate yourself and challenge your own views - it is the only way to stem the flow of racism that still plagues almost every corner of the globe.

(5 stars for the Frank Talk columns, not rating the Aelred Stubbs biography at the end, which pales in comparison to the words of Biko).

As a black South African born 10 years before democracy, it is only now that I am an adult that I see the effect that apartheid has had on the culture and value system of black South Africans in particular.This book is an effective lesson to any South African that he is not a victim of his circumstances. Every man has the power to make the choice to change his life. A truly inspirational read.

I loved this book. I love Steve Biko and this writing. I read The Sabi which was a personal account of life growing up in South Africa and references were made by the author Brown, to Biko and Ture. So I decided to read this book after reading The Sabi - and I am happy I did. In this book the author states that the time of Biko was never over. And I agree with Brown in her book - "It was never over".

Biko's book affirms the realities of the black experience and how it is incumbent on people to own their own identities, to claim it as a prerequisite for real freedom. For the African living in America, the best comparison would be to Malcolm X .. It is a great book and one that should be read by Africans in Africa and around its diaspora. The real freedom can only be defined by the African.

It was difficult to get into, but I suppose I was not ready for it at that point in time. So I parked it for over a year. When I did finally get into it I was absorbed. My own "Black consciousness" was awakened and I am now a better African than I was. I always say this book should be compulsory reading for our children and subsequent generations, lest they forget who they are. I know it will be compulsory in my home.

He had the charisma of Mandela, the courage of Hani and the intellectual capacity of Sobukwe and Mbeki....Dead before 30 at the hands of apartheid...

Insight into the mind of one of the most inspirational and unique South African struggle heroes. Where others were fighting for freedom, he was trying to free the african mind (decolonsing the mind). It's one of the most beautifully written books and makes you proud of being a South African, challenging you to do better.

" The most potent weapon in the hand of the oppressor is the mind of the oppressed".. Steve Biko will always be remembered as one of the most outspoken leaders in South Africa's liberation movement. An exceptional man with a profound intellect and mind the right attitude to change a nation. Such an inspiration book, added so much more depth to my perception..