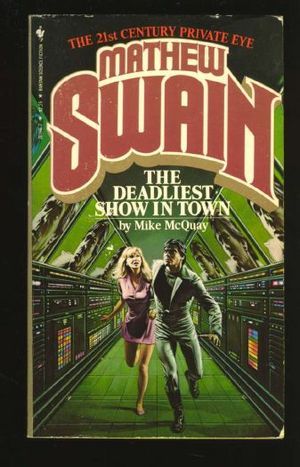 A whole bunch of double-dealing and backstabbing. Another great read. I love this series. Kind of like the Flashman of the hard-boiled noir mystery set. Perhaps this one wasn’t quite as funny as the last two, but it’s certainly hard to rank them against each other in any sort of order.

This was fine, but I didn't like it enough to read anything else in the series. The near-future premise of a global news conglomerate that owns its so-called competitors and directly creates/manipulates the news is even more darkly relevant today than it was in the 80s, and I particularly liked the legal framework hinted at which allowed the organization to operate (e.g., if people came to a network and offered to fight to the death for money on camera, that was fine, as long as the organization didn't directly solicit them to come forward; it's also OK to film a bank robbery as it happens and to make suggestions to the robbers in real time about the additional financial backend they would be entitled to if there just happened to be civilian casualties, because that's just another way of compensating someone fairly for something they were already going to be doing anyway). But I tend to not have much patience for the sort of (minimal) mental energy required in these novels to suss that "frump" means "gun" and "bullet" means "car." I get the need to have these verbal signifiers to remind the reader that we're In The Future, but it I find that it usually just hinders my enjoyment and slows down what should be a quick read. Plus, although well-written, the plot was too on-rails to feel like Swain was doing any real detective work, rather than just moving from encounter to encounter.

All of the Mathew Swain books are worth reading, however, this is my least favorite of the quartet.It is a shame Mike McQuay never wrote any more of these Swain books because they are an awful lot of fun. All of the books have very nice artwork on the covers too!