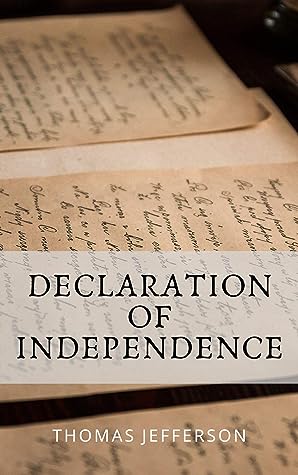 the Declaration of Independence

Put aside slavery and hypocrisy—if you can—for a moment, and read the first paragraph (71 words, 405 characters):

When in the Course of human events, it becomes necessary for one people to dissolve the political bands which have connected them with another, and to assume among the powers of the earth, the separate and equal station to which the Laws of Nature and of Nature's God entitle them, a decent respect to the opinions of mankind requires that they should declare the causes which impel them to the separation.

Take note of the richness, the complexity of the language. The elegance of the style. The sophistication of the philosophical assumptions. Pause, for a few seconds, and consider the phrase “a decent respect to the opinions of mankind.”

Now compare it to Donald Trump’s latest three tweets, America. And weep for yourselves and for your children.

This time through, shortly after “life, liberty, and the pursuit of happiness,” I was struck by the following words:

Prudence, indeed, will dictate that Governments long established should not be changed for light and transient causes; and accordingly all experience hath shewn that mankind are more disposed to suffer, while evils are sufferable than to right themselves by abolishing the forms to which they are accustomed. But when a long train of abuses and usurpations, pursuing invariably the same Object evinces a design to reduce them under absolute Despotism, it is their right, it is their duty, to throw off such Government, and to provide new Guards for their future security.

It is time to dry our tears, and our childrens’ tears. To seek enlightenment concerning our rights and duties. And to continue to catalog the lengthening train of abuses and usurpations.

This founding document of an independent United States is just that and was not considered to be a governing document equivalent to the constitution. Some politicians and scholars have since tried to elevate it to that status. However it remains primarily a list of grievances against Great Britain and a list of justifications for declaring independence.

The declaration does also contain some general statements about human rights including the famous, "We hold these truths to be self-evident, that all men are created equal...." This particular declaration often causes some confusion. Of course I am not equal to the heavyweight boxing champion of the world or to an Einstein level genius. I am however equal under American law, have equal self evident rights and of course God's love is equal. He loves all, the weak and the strong, the half wit, the full wit and the extra wit. God's love covers us all. Which is a really good thing as we seem to be rapidly becoming a nation with a surfeit of half wits.

Astounding language and content it's the essence of the Revolutionary spirit as well as most of Jefferson's thoughts.

Isn't it awesome this is listed on goodreads?

I read this document a couple times a year. Whenever I do, I wonder if the list of government abuses would be longer today.

How many millions of dollars per minute of interest does the American taxpayer get stuck with thanks to Congress?

How many months of forced labor does the average citizen work in order to pay their taxes? And how much do we pay with the hidden tax of inflation from the Federal Reserves' fiat money?

How many American citizens get killed in undeclared wars, where national security is not an issue, to support United Nations resolutions and the New World Order?

Don't get me wrong, I love the United States, but the further we stray from the Declaration and the Constitution, the sicker we become.

I have read this many times but wanted to read it again with all the headlines over the confederate flag and the cause(s) of the civil war. What did Jefferson mean by "We hold these truths to be self-evident, that all men are created equal, that they are endowed by their Creator with certain unalienable Rights, that among these are Life, Liberty and the pursuit of Happiness." I think Americans have been arguing about this for over 200 years.

2 Stars
I rated this book 2 stars simply because this book was one of those books that are just okay to read. I don´t really read history kind of because to me some are good and some are not so much. The reason I read this book is because I had to read it for one of my classes that I am taking. At first I thought for sure I was not going to like it because of the way it sounded. As I was reading this book I changed my mind about it. I was better than what I thought. I would not read this book again because it was not my favorites. I would recommend this book to anyone that likes reading about history.

This organic document is the "arc and covenant" to the Constitution.

This is the poetry that preludes the prose of the Constitution of the United States. A revolutionary document. How a group of men who couldn't agree on whether to keep the windows open or shut could come to agree on declaring independence is nothing short of a miracle. Jefferson had a genius in the power of writing persuasively. And the truths recorded therein are self-evident.

As it is kinda stupid, it is quite funny that i think even today such a text with a good reading may cause a revolution

What to say about the Declaration? So much actually. We take too much of Jefferson’s rhetoric as true, when he was actually trying to justify a decision not even a majority of colonists supported. The most galling thing about the document are the calumnies concerning George III, who was actually a throughout decent man and the best monarch between William III and Victoria. We need to treat the Declaration cautiously. And we never should use it as a lens to interpret the for more important Constitution.