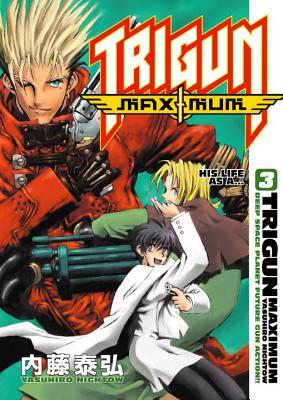 The Trigun Max manga includes many aspects and characters from the television show but places them in different situations at different times giving the reader a much more detailed and dramatic idea of who these terrible enemies really are and the rough challenges Vash faces every day.

This volume gave me a lot of trouble the first time around: half the time I had no idea what was going on. This time I managed better.

I think this would be easier to understand if I knew the Japanese sound effects, like I'm fairly good at guessing but I guess I'll have to look those up. This was almost entirely fighting as well, so chaos out the wazoo but for the most part I managed to follow it. I liked a but of the glimpse into Vash's past as well.

Vash has his hands full with Emilio The Puppet Master and Wolfwood is up to his ass with Nine Lives, the Immortal Monster. Will Millie and Meryl arrive in time? What sort of claims are the Bernardelli Insurance Agency going to have to pay now? Will Vash get out of this without killing anyone yet again? Will Wolfwood ever get to preach again, or will he have to instead continue to use his cross as a machine gun and rocket launcher?Listening to Mods, Skins, Punks by The Professionals

Hmm...I think this entire book was fighting? Haha - I'm sure this series would be much easier understood if I could translate the Japanese sound effects...I can read most of them, but reading and translating are two different things (as I've only learned basic Japanese thus far)

Gun battles do not work that well in these mangas. Story moves too fast. Bad translation too.

Wolfwood is hopping about from big fella’s smashing fist, and Vash wonders if the big fella’s actually conscious. Vash next demands Wolfwood stop, wanting to have him see reason. This allows big fella to set off a big explosion to show where his feelings lay. He’s completely taken with the idea of making Vash 1 of his puppets for not being wholly human, anyways and is ofc, extra unique.

Meanwhile, Millie and Meryl are yelling about “The Thomases” going to the bathroom, all kinds, in a spot around the shed. Then it’s given to Ninelives to strike next. Wolfwood is battering rammed by the large fella, whom has endless stamina, so far. Wolfwood goes in for another blast from his cross gun.

Vash is walking in a field when a doll comes up on him, so he shoots it, a disembodied voice inviting him to approach. Wolfwood starts thinking the big fella could be immortal. Vash walks in on what seems like a group of smiling ladies, they drawing guns, but Leonof surfacing and shooting. An innocent victim, a girl is bleeding from her neck, laying on the ground.

Vash goes to her, as Leonof mocks him. Vash starts listing off names, and a lot of explosions later, Vash states Emilio the puppetmaster’d given away his weakness. After man explosions more, Meryl, and Millie are chatting about how lucky it is they located Vash at the hospital. He wakes up and the 2 greet him warmly.

Luida comes in as Vash’s blaming himself for the trouble caused, Luida stating why this is incorrect, what with saving them from certain destruction. Luida also explains the enemy Vash’d been fighting had Ninelives, which seems like separate threats. They’d been able to contain 2 of the 9 in a cage, and would take over investigating further. Later on, as Vash’s resting, Wolfwood comes by, Vash taking opp. to apologize and thank him for helping him save more people.

Once Vash’d recovered, he’s walking around outside when he’s called by Millie, Meryl with her, he wanting to show them a broken coin-looking piece he’d been holding. Wolfwood chats with a lady whom knew Vash, since she’d seen when he’d been located near the crashed ship 70 yrs earlier and still looked 30. Vash’d lost his arm, but when he’d walked to a certain spot, healed quickly. After a bit, they realize the 2 in the cage’d gotten out.

1 of ’em goes after Vash and Wolfwood helps him out, he thanking him for saving him from the scary fight. The lady has a moment to chat with Wolfwood about how Vash puts himself through so much hell from friends, and enemies, and instead of healing himself of all his scars, which his immortality’d allow, he soldiers on. They see Vash smiling, still even after all the trauma humans share with him.

In the after comic, comic it’s shared the fake arm in this 1 is the
“angel arm”. Cute installment!

This volume was mostly just gun fighting scenes, which didn't really do it for me. Maybe if I read Japanese (and the Japanese version of this volume), I might of gotten a little more out of it.

We did learn a bit more of Vash the Stampede's past, which was very interesting, which is why I'm giving this a 3 instead of a 2-star rating.

The villains just keep getting crazier (May 2009)