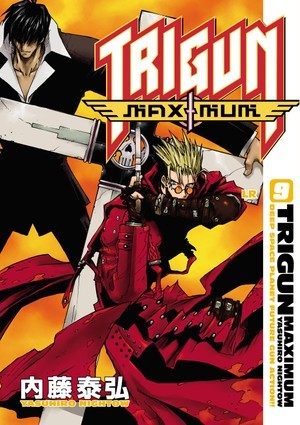 This is the story of Nicholas Wolfwood and Livio, two boys for whom friendship was brief, but still burned deep into their boyhood conciences. But those bits and pieces, though full of light, are mere shadows to these men of guns and blood and violence.

Yes, in this volume of Trigun, our hero Vash takes a bit of a rest, and he certainly deserves one. So, now we'll study a This is the story of Nicholas Wolfwood and Livio, two boys for whom friendship was brief, but still burned deep into their boyhood conciences. But those bits and pieces, though full of light, are mere shadows to these men of guns and blood and violence.

Yes, in this volume of Trigun, our hero Vash takes a bit of a rest, and he certainly deserves one. So, now we'll study a boyhood relationship, one that, in this very volume, just might come to a destructive and angry end. Though, it may be a bit tough for either one of these "friends" to knock each other off. They both have secrets up their sleeves, and Livio, well he might even have an extra sleeve!

As always, published in the ever-popular non-westernized format, with Yasuhiro Nightow's commentary in the back and the comical original black and white covers printed on the inside.

I can't say I like Wolfwood as much as most other readers, so this volume didn't offer as much for me as the rest of them. Still good fights, though.

finally Wolfwood's character is unravelled more and we see his past.

Nicholas intros himself to the new kid at the orphanage, whom’d been crying for a few days. Then, present day, Wolfwood rides into a town on his motorbike, and after learning about an ark turning their town into slums, a superior shouts at him, so Wolfwood rides off. In flashback, Wolfwood is seeing the new kid regularly sit with his head down outside daily, on the steps. Finally, Wolfwood confronts him, and when the boy gives a woe is me story, Wolfwood confides how every kid there felt similarly, and had varying similar stories, so he should continue on, like they were with better humor.

The kid starts helping with chores, Wolfwood hoping he gets how teamwork allows a sense of safety. Everything continues on fine, til Livio makes trouble, Jasmine following a puppy, and getting to a great height on an apt, on a board. Everything went back to normal after she’s rescued, til 1 night he’s escorting a younger boy to the b/r when he sees Livio out late, then vanish, next day the puppy’s body is located in the same spot. When Wolfwood finds Livio asleep with blood on his hands, he speaks with G/ma Melanie, whom believes his story of not doing it.

The kids don’t jump on board as quick, and Livio disappears after awhile. Back in the present, Wolfwood quick stops when a young man blocks his path with his body. Wolfwood recognizes him as the same kid he walked to the b/r all the time, he going inside to visit with G/ma Melanie. He learns from the boy of G/ma Melanie’s capture with some others by 5 odd men, and when 1 of these guys mocks a boy, whom’d come to rescue his sis whom was also in the sewer he alludes to raping her when the boy lashes out, replying his response is boring and is screaming how he’s going to shoot him repeatedly when Vash appears and bashes him down, this alerting the others to his arrival.

The young man whom recognizes Wolfwood from boyhood wonders out loud to his fellows how he isn’t older-looking. Wolfwood drives in gun blazing and no one’s left upright. When he listens to Livio threaten to kill him, as the orphans and adults hear the explosions from where they’re waiting in the sewer. Meanwhile, Wolfwood is leisurely having a smoke wanting to understand how Livio’d become gung ho about contract killing.

Livio obliges by telling how it’d occurred a few months after he’d ditched the orphanage, at a desert town, he discovering an odd note in his pocket with the name Razlo written on it. Next he’s called out by a couple townies on how they aren’t allowing new people in town, so he should leave, but they aren’t only considering his “type”. When Livio asks for their help he’s met with a beating and insults. Livio keeps receiving badly handwritten notes from Razlo of having his support, til 1 day he hadn’t seen the 2 men for a few wks, and then after repeated beatings, he’d finally clicked to being done, and the men beating Livio, meet Razlo, his other side.

Since Livio is still a child, he like an adult doesn’t have the notion they’re going crazy. When the 2 face off with guns at each others heads, Livio’s out of bullets, and Wolfwood says goodbye. Wolfwood has a chat with another baddie about how Livio doesn’t die so ez, Livio then opening fire at him, and calling him Chapel, and Nicholas the Punisher. Despite doing his worst, Wolfwood also lasts and Livio revs up to hit him again.

What catches Livio’s attn is a small, pen-like device which is thrown into the air, knowing if it went off, everyone is dead, Wolfwood coming at him. He realizes for some reason Livio is holding off killing him, since he knew he could’ve deflected the missile thrown. Then it’s shown when Wolfwood had been gifted with the 10th weapon made for a member of the Eye of Michael, and the cross weapon is called, Punisher. Then, it shows Razlo return, ready to wage his own war on Wolfwood. When Razlo is captured, he confesses his glee for being with the Eye of Michael. The q whether both personalities truly separated from each other. The old man Wolfwood’d been fighting, Master C concludes his plan to finish him, but then thinking of Vash. Wolfwood is conflicted by how Vash easily lived through the horrors whilst he still felt guilty.

This volume was all about Wolfwood and his futile struggle with persons from his past! Nicholas is nearly indestructible, but there are others out there who know how to take him down! Witness an epic battle in Trigun Maximum, volume 9!! (haha, felt like making it sound like a commercial)I love Wolfwood!

Very little exposition in this volume, but at least the fight scenes were clear.

I picked this up cheap because of the exploration of Wolfwood's past. Was not disappointed. I may have to read a few more.