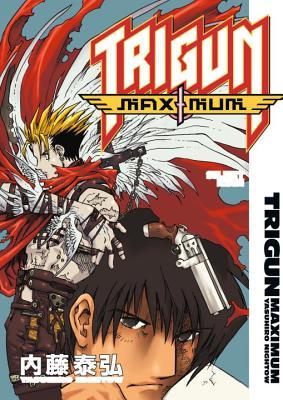 Ah, here we go - back to the confusing parts. It seems I'm not as good at understanding these things as I thought I was.

https://bookwayfarer.wordpress.com/20...
Vash and Knives chat of how all their predecessors were killed off by human, and had black hair by the end, and not due to naturally using up their power, humans having to ask for the plants help. Vash adds how their bros were forced, due to no other way out, and people are desperate, and suffering, Knives saying it’d all been caused by the big fall. Knives and a chick with a forgettable name, see transmissions made from space as a ship receives warning loudly of being in an area they shouldn’t, everyone, including fams seeing the ship where their ancestors’d flown with, and the military captain planning to approach the ship aggressively with troops. Wolfwood approaches Nicholas saying he’s still apart of the Gung Ho Gun, “The Eye of Michael”, whom tries to stop him from killing peeps, but Nicholas saying it’s already done.

Knives is listening to people plead for his help, Vash saying people can change, everyone’ll be burnt at the bottom of a garbage dump. Knives makes his case for how humans’re like cattle, and they’ll keep taking until all is gone, so Vash should allow him to bring the world justice. Then Tessla’s brought up, Vash replying it was the day he’d lost Knives. Vash attempts to show how Knives’d buried his feelings rather than face the hurt this knowledge’d caused him, and now he merely doesn’t want to feel anything anymore. Vash states if Knives fought against himself it’d be the only battle he’d need to fight, Knives agreeing if humans did the same, everyone’d be even. Knives ends with this fight bringing peace.

Now Knives is ready to unleash all their bros and if they are meant to survive or humans, they would. Meanwhile, Wolfwood faces off with Livio whom’s pissing him off easily. Meanwhile, in the desert, a military team observes a town, 1 man looking burnt coming to them by foot from town, and saying plants’ve been put on a ship, and the town’d become quiet after possible a couple wks – months. When the team finally goes to see they discover people’d attempted to cannibalize at some point, due to millions starving to death.

The large ship goes around the world collecting the plants and humans not knowing what was going on made them more hysterically fearful. As this genocide occurs, humans become like their primitive selves, wiping themselves out. As it’s on its final breath, 7 months later, Mer and Mil are greeted by Luida. Mer shares how they’d located a town which wasn’t in ruin and had supplies, but the military also plan to attack the ship.

The topic turns to Luida knowing about when Vash awoke in July, people now thinking this could happen again. Luida notes how Vash’s survival against Knives in their last battle seemed lucky, and had max out his strength if he tried again. She goes on to mention how Knives’d “erased” 30 men when they initiated an assault. Then she realizes if what happened in July occurs again it’d be to stop Knives.

Then a flashback of a fam thanking a girl whom was feeding them, the little boy smiling and yelling how she’d smiled after they’d thanked her. Meanwhile Wolfwood has his gun pointed at Livio and when he shoots, he’s uncertain it’d hit him. Livio then states how he doesn’t believe in people which the Eye of Michael have to follow completely through life. When Wolfwood’s hit back, he qs whether he’ll survive, he then remembering when they were kids in the orphanage, they relying on each other to get through.

Then Knives is noted to have been attempting to fuse with different plants developing in to a different way to live. Vash notes to the underling how Wolfwood was getting himself killed for him, so he wouldn’t be giving up, despite Knives planning to save killing Vash for last. Vash plans to mess up Knives’ plan, dashing at the changed Knives. Vash finds Wolfwood, hanging on to a thread of life as he lay, his abandoned cross weapon nearby.

Wolfwood explains how he has fast regenerative cells, but it makes him age quicker. He continues about why he and Livio were at odds being due to Wolfwood having shot at him, and now Livio’s pissed because Wolfwood’d planned to take over as Chapel to get close and kill Knives. Vash comes to understand what Knives’d done by fusing with the plants. Due to Knives attacks around the world, a migration of people was occurring, and many towns were getting ghosted.

Another issue was the fleet coming to aid them’d be arriving sooner, which meant they had to handle Knives sooner. He did have the power to strike from far away and do technical battle from afar with his arm. Wolfwood comes to another town, Maylene expecting a priest to bury her g/pop, but he seeming grungy. Maylene explains her predicament with the richest man in town’s son, Orekano wanting the deed to her plant, so she could sell it or marry him.

Wolfwood’s opinion for her being to not care, since the “gilded cage” Orekano had to offer should be enough. Orekano confronts Wolfwood dramatically and beats him up, asking if he’d slept with Maylene in a more vulgar way. Wolfwood responds by calling Orekano a pedo, so he has his entourage open fire. Orekano extends his rage to Maylene, whom he now blames for betraying him by his thinking she’d slept with Wolfwood.

Maylene thanks Wolfwood for his sexist help before he ditches her, she giving him a carved bird she’d made same as he’d done when he was a kid for a baby girl he’d help sit for 1 of the orphan caretakers.

Knives get crazier, and starts to have flashbacks/memories from all these plants he's fusing with. We also get some insight into the Eye of Micheal and an awesome Wolfwood spin-off! Loved this volume : )

In this volume we learn more about Wolfwood's background, and how he is tied into this whole mess. Knives is getting crazier and more powerful. Vash may be our only hope for the survival of the human race.

Hmm... I was pretty lost at the beginning of the book. I'm not entirely sure what Knives is doing. But, Wolfwood's mysterious identity was finally revealed! I also really loved the Wolfwood spin-off at the end!

More mysteries abound I'm sure as I venture into volume 9!

This is probably the strongest installmentso far. Knives continues his ascent into godhood and his descent into madness (reminds me of Kefka).