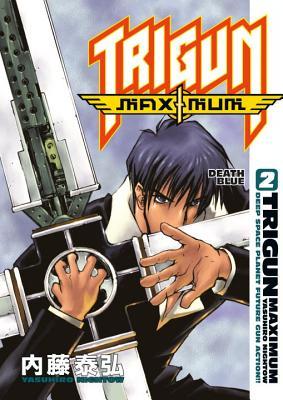 In the first volume of Trigun Maximum, we caught up with Vash and watched him jump back into service for Peace and Love! But now the action really begins.

Remember the Gung-Ho Guns? That modge-podge group of assassins born and bred to kill Vash? Well, they're the ones who're still alive and are still trying to kill him, and in Trigun Maximum volume 2, we'll see the beginn
In the first volume of Trigun Maximum, we caught up with Vash and watched him jump back into service for Peace and Love! But now the action really begins.

Remember the Gung-Ho Guns? That modge-podge group of assassins born and bred to kill Vash? Well, they're the ones who're still alive and are still trying to kill him, and in Trigun Maximum volume 2, we'll see the beginning of a whole new set of worries for our gunslinging mysterious nice guy.

See the whole menagerie of freaky Gung-Ho Guns come after Vash in lots of crazy ways. The fun is really getting rolling in Trigun Maximum, taking you way beyond the anime and into new, dangerous territory. Co-published with Digital Manga.

I think it's the character of Vash himself that carries the story - even when the plot and the artwork may sometimes be a little lacking. He's just such a badass, yet also genuinely a good and idealistic person. All too often badassery comes with a solid dose of cynicism and meanness.

3 1/2 Stars
This volume started out rather confusing -- partly because it's been awhile since I read #1, but also the artwork was hard to follow.

We get to see a lot more of the dynamic between Vash the Stampede and Wolfblood, which is pretty comedic. There is a dramatic/comedic battle between Vash and a Samurai, which Vash attempts to bring to an end in his typical manner. After all, he is the man of "peace and love". :) The ending of this particular volume is a bit heartbreaking, as our hero is brought face to face with the Puppet Master.

I hope the next volume won't quite take so long to get to me. I really enjoyed the Trigun Anime, and want to see more of the Manga that was the inspiration.

Some fellas discuss the rumors of Grim Reaper’s carriage, and how they’re going to try capitalizing on it rather than inform the news. It’s explained and Daryl Goodman whom owns a manor is a lead from witnessesses, but Daryl hasn’t been in town for a few months. So, the inmate is being given the chance to determine what’d become of the sheriff’s missing “men”. Next, the convict’s attacking a large and thin fella.

The fool thinks he’d obliterated them til looking through the rubble, the large masked fella ending him. The thin fella refers to the large fella as Gauntlet as he seems to freeze the men attempting to attack them. Then it’s decided they’d make them all stuff themselves into a truck tank, the crazy large guy talking of how much worse he desired to show Vash. Meanwhile Vash is planning to leave town for knowing bad peeps are after him, and wanting to protect his friends.

Thin fella is gleeful for getting news of locating Vash. Gauntlet’s next shown slurping his meal off a plate by shoving his face onto it, thin fella commenting. The rest of their gang’s intro’d as Gray, Leonof, Zazi, and Rai-Dei. 1 of the Gung Ho Guns mentions how Vash’d already beat 3 of their men, so they must recognize the monstrosity he truly is, but the guy includes their boss Knives as being just as monstrous.

The end goal won’t be to destroy Vash, but to present true human nature to him, in order to show how pointless it is to save humanity. Meanwhile, Vash is riding shotgun on a side-car bike as he and Wolfwood ride to a ghost town called Tonim, the people there mysteriously disappearing, and Knives’ name’d been found in the center of town, again. This leads Vash to ask how Wolfwood knew Knives’ name. Vash is confronted by Rai-Dei, and greets him nicely.

When Vash hears mention of this fool planning their meeting as a death match, Wolfwood wonders if he’s cracked, since he only had a sword showing, so he warns Vash to be wary of hidden weapons. Vash parries Rai-Dei’s attacks, hoping he’d change his mind on killing him, but Rai-Dei makes clear he’s only getting started unless Vash kills him. Rai-Dei pulls out his fance technique, and Vash still anticipates him, having fast af reflexes. Vash’s win breaks Rai-Dei’s belief in the ultimate style he’d learned for the blade, until he reminds himself of the humanity he’d given up to use and perfect it.

Rai-Dei tries another variation of his technique, only to be met with Wolfwood shooting him, Vash pissed and clocking him. Wolfwood gives Vash opp. to kill him, so he’d be able to play the devil when need be, but Vash confesses how Wolfwood showed his weakness with the look on his face. Meanwhile, Millie and Meryl are trying to hitch hike and how they’d heard Wolfwood’d been seen nearby, with his huge-ass cross, from the guy they get a ride from. Then they see a large craft, which they decide to check out, seeing a girl lying nearby.

Flashback to a Brad shoving the girl into a safe spot before they crash. Back with Nico (Wolfwood) is greeting the kids in the community. Back with he and Vash, they quickly find a room, the renter having his own problems which his son wants to assist since it involves his ma. He knows the Gomez fam’d set them up to lose, so the 2 go and collect the boy’s ma.

The boy gets back to town and gives people shit for judging them, but then the leader looking like a roided-out goomba comes after him, and threatens murder! Wolfwood handles him though, and then the 1st moment he’s reborn from the blood he’s shed is noted, and it’s the 1st time he didn’t hope to die. As they ride an elevator, Vash mentions his intention to return home, Wolfwood realizing the ship they’re in is the home Vash is speaking about. Wolfwood then understands how it’d stayed hidden for a century.

They reach the main area with the people, who’re all glad to see Vash after a decade being away. Next from the Gung Ho Guns is the Puppetmaster, Leonof. He uses body parts and bodies which join together to become more powerful than gods. A hand comes out of the sand which Wolfwood dodges, Leo and Vash staring each other down.

I’ll be glad to see what the finale holds!

I’m new to manga. I found the artwork in this book confusing in many places.

Knives, Legato, and co. are making Vash's life miserable, and so is Wolfwood to a lesser extent. Meryl and Millie are hot on their trail. It's heartbreaking to see what the Puppetmaster does in the end! (May 2009)

This was the first Trigun manga that was slightly different from the anime. It had two of the story-lines from the anime, but were told differently. I was still a bit confused during some parts of the manga, but there are 12 more volumes to go, so I still have faith it'll get less confusing.

The sixty million double-dollar man is back for more future gun action!

pretty good. it was very humorous.