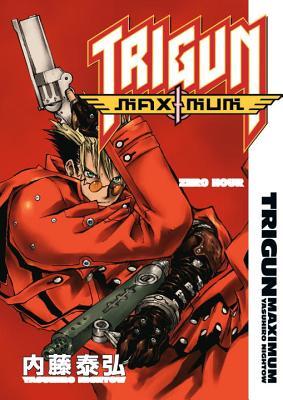 Everything is climbing steadily to a crescendo. What lies in store for the people of the planet Gunsmoke?

Everything is climbing steadily to a crescendo. What lies in store for the people of the planet Gunsmoke?

Elendira the Crimson-Nail is a source of some more confusion to me. To this day, I'm not sure I've ever seen where his (her?) nails actually come from: they just show up on the scene with someone already impaled on them, with no gun or anything involved. Another confusing quirk of this manga's fights, I suppose.

https://bookwayfarer.wordpress.com/20...
Members of Knives’ gang discuss dead members like Chapel and the old man as Vash is getting shit from a fella, Brad back on the ship, and refusing to trust Vash wouldn’t kill them the 1st chance he gets. Soon they refocus to how the military plan to bomb them with 1 of the last pieces of ship tech, and only needed a clean shot. What the military didn’t know or care about is where the energy for the blaster is coming from” the plants in the ark, and they aren’t going to follow the order to kill their own kind, but more likely will take out humanity. The last surviving humans gather from the 7 dead cities to Oct, where the ark is supposed to land and save them, people starting to aid each other, for now.

Mil and Mer reminisce of the old days tagging with V as they stand on the ark looking out at the desert. Then a big explosion followed by Vash appearing, the 3 happily reuniting. Then over the radio is a message from the people who’ve come to help them, assuring they’re relatives from the space armada “Pieces of Earth”. Knives is aware of their arrival and gleeful for how much they’d brought with them, since his plan would ‘ve destruction come down on everyone’s heads.

Meanwhile, V orders the wrong caliber bullets, and the man at the bar tells how painful it is to watch him struggle rather than ask for help from Mer or Mil who wait to aid him all the time. It makes V uncomfy emo as he cries in front of the guy, which he confides to V is awkward. Outside people start seeing a brightness in the sky, people soon realizing what it is, and seeing it grow. Stardate yr 0114, 20th day, 7th mo, 8:47pm, Knvs has a chat with 1 of his women disciples, she saying how her kind’ve been helping the plant species for quite some time, another woman soon feeling unwell, and asking Legato what is happening to her.

Soon, Knvs feels the poison, and thinks it’s worms, this confirmed by another foo outside, declaring the poisoned been administered to a part of his brain, and the effects’re now showing. The woman soothes Knvs to know they plan to at least carry out his wish to end humanity, he just not surviving to see it. Meanwhile, Legato is soon being controlled by a worm, whom details he could use Legato’s power to relocate the whole “colony” into Legato on a whim. Later, a tally of the fallen Knvs gang is discussed, it noted Beast is still missing.

A woman, Chronica states to a fella in glasses of “independants”, plants are still on the planet, and how the black hair which’s supposed to prevent independants from even being created, has been learned how to live through. Chronica talks out loud of how they must’ve learned how to absorb their siblings for the power needed, the man qing how nothing is unkn to her, and she revealing how she being his creation meant he should know what she knew. Meanwhile, V discovers and puts together a switch, he then relying on Livio to look out for his trannie enemy. Then, yr 0014, Jul 21st, people see the fantastic-looking being flying upward into the sky.

Vash’s reassuring the mayor of they not being in danger, and if he’d allow him into the upper levels of the ark, when Luida returns, and she qs V on whether he’d finished the explosives he’d been working on, it going well, and he sharing ‘their’ “voices” could be heard by him, being scared, and knowing an attack’d occur during the evening, V encouraging shooters to aim like being aware women are inside the ship, so aim high…and he didn’t plan to allow Knives to keep getting his way. A few hrs later, V’s still advising the people back up areas to aim, telling of a plant’s 2 powers giving and taking power, would be how they’d hit them. Vash tended to use his power to keep a small window open for them when they close the gate. Mer starts crying, making V think she believed he wouldn’t succeed.

The mayor next sends out a message to the remaining humans to not shoot at the ark when it gets closer, stunning them. Meanwhile, Chronica tells the scientist about analysis, then instructs her to send a message to Earth to ask for permission for a preemptive strike. Livio faces off with the woman and she taunts him to make his shot, she surprising him with 1 from the sky without moving from directly in front of him. She then states how she feels a bit estranged from Knvs’ lack of trust in her ability to follow through with detonating the bomb to end human life.

Livio scares some kids he’s attempting to warn not to go outside, and the woman’d only be after him, but seeing him stuck through with a few knives and swords having the kids retreating slowly. Then the kids older sis comes in and finds them, scolding how they should’ve left, they agreeing and tearily apologizing. A couple hrs after this, Livio is looking at the plant monster in the sky.

It’s revving up, hopefully, again. This has been light shit…

This is probably the most informative volume (more plot, less filler) that I have read so far which I have to say is pretty exciting. I admit I was confused a couple of volumes back when the bug kid (male) called Beast died and then came back as a teenage girl and was still somehow the same person. Yeah, that gets explained. Turns out that humans and plants (like Vash and Knives) aren't the only intelligent species on the planet. We also have giant sandworms who apparently share memories (like planaria!) and can evolve new abilities (like evolving a poison with a specific desired effect). The mosquito-type things that follow Beast around are part of the sandworm collective too. Beast actually is a human that has been infected with a parasitic mindcontrol worm (totally gross).
Meanwhile, a delegation from Earth has just come out of warp drive near the planet Gunsmoke. Why is this relevant? They have sentient plants similar to Vash on board. Apparently Earth had encountered the same problem of plants spontaneously becoming self aware and made better choices when it came to studying the new species. They even went so far as to place neural blockers on later generations to prevent plants from fusing together and losing their individual identities (yeah, Knives doesn't have that, he's totally going insane (well, more insane)).
I hope the next volume is this good.

This volume was pretty mild (I feel) compared to the last two, still some crazy fight scene. And I'm still not entirely sure who this Livio is (an old friend from Wolfwood's childhood who grew up to be an assassin, I get that) but I'm really starting to like him! He's pretty rad!