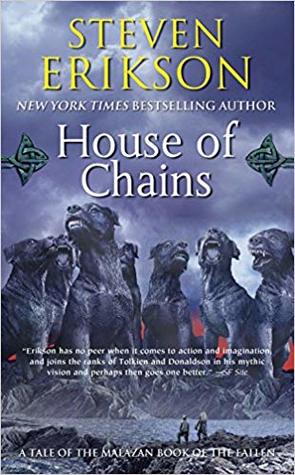 House of Chains (Malazan Book of the Fallen, #4)

Quotes From "House of Chains (Malazan Book of the Fallen, #4)"

"Wise words are like arrows flung at your forehead. What do you do? Why, you duck of course."
183 likes
"One day, perhaps, you will see for yourself that regrets are as nothing. The value lies in how they are answered."
112 likes
"Shadow is ever besieged, for that is its nature. Whilst darkness devours, and light steals. And so one sees shadow ever retreat to hidden places, only to return in the wake of the war between dark and light."
37 likes
"I was needed, but I myself did not need. I had followers, but not allies, and only now do I understand the difference. And it is vast."
32 likes
"Ammanas slipped noiselessly forward until he was on the other side of the corpse. ‘It’s her, isn’t it.’
‘It is.’
‘How many times do our followers have to die, Cotillion?’ the god asked, then sighed. ‘Then again, she clearly ceased being a follower some time ago.’
‘She thought we were gone, Ammanas. The Emperor and Dancer. Gone. Dead.’
‘And in a way, she was right.’
‘In a way, aye. But not in the most important way.’
‘Which is?’
Cotillion glanced up, then grimaced. ‘She was a friend.’
‘Ah, that most important way."
23 likes
"Karsa's expression soured. 'When I began this journey, I was young. I believed in one thing. I
believed in glory. I know now, Siballe, that glory is nothing. Nothing. This is what I now understand.'
'What else do you now understand, Karsa Orlong?'
'Not much. Just one other thing. The same cannot be said for mercy."
23 likes
"Innocence is only a virtue, lass, when it is temporary. You must pass from it to look back and recognize its unsullied purity. To remain innocent is to twist beneath invisible and unfathomable forces all your life, until one day you realize yourself, and it comes to you that innocence was a curse that had shackled you, defeated your every expression of living."
22 likes
"The stars, they are as the sun. Each star. Every star. And those spheres- they are worlds, realms, each one different yet the same."
21 likes
See All Quotes From "House of Chains (Malazan Book of the Fallen, #4)"