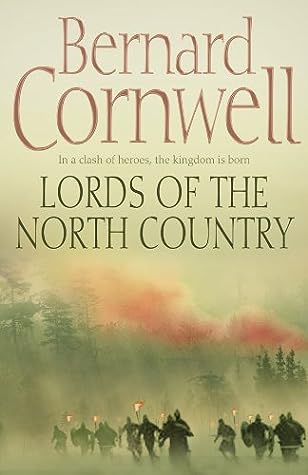 Lords Of The North (The Last Kingdom Series Book 3)

I have a Booktube channel now! Subscribe here: https://www.youtube.com/petrikleo

This was a good but slightly weaker volume compared to its predecessors. It’s so good to finally meet Sihtric and Finan for the first time, though.

The Lords of the North is the third book in The Last Kingdom series by Bernard Cornwell. Uthred is now 21 years old, and the story in this one mostly revolves around slavery, a clash of faith, and the battle against Kjartan. A few new characters were introduced in this new installment, and the most notable ones were Guthred, Sihtric, and Finan. I’ve mentioned that Sihtric and Finan were my two favorite side characters in the TV series, and it felt good to finally see them starting to appear in the story of the books. But more on these two on further volumes, right now, the plot in The Lords of the North requires the appearance of Ragnar, and I enjoyed reading the friendship between Uthred and Ragnar so much.

“If a man can’t remember the laws,” Ragnar said, “then he’s got too many of them.”

Admittedly, though, despite how well-written the book was, I did feel that having watched the TV show—meaning I knew what would happen already—backfired on my reading experience this time. I’ve mentioned in my review of the previous two books that the first season of the TV show was inferior compared to the books, but I think it’s the other way around for the first half of the second season and this book. The pacing was often sluggish, and the fact that Cornwell’s paragraphs and chapters were relatively longer than usual made me spent 5 days finishing this 400 pages book. Honestly speaking, this is an extremely slow reading pace for me, and I hope this won’t be the case for future books in the series.

“I was just twenty-one and my name was known wherever men sharpened swords. I was a warrior. A sword warrior, and I was proud of it.”

The Lords of the North was another good continuation of Uthred’s story. I planned to read two books in the series per month, which would mean I would be done with the series by July. However, after reading this book, I realized that the episodic and repetitive format of the story might require me to alter this reading plan to read one book in the series per month instead. I loved Cornwell’s writing and storytelling style, and I don’t want to feel burnout by this series from reading through to it too quickly. So yeah, that’s my plan for now. Looking forward to reading Sword Song in March.

You can order the book from: Book Depository (Free shipping)

Special thanks to my Patrons on Patreon for giving me extra support towards my passion for reading and reviewing!

The second season of the Last Kingdom has started off very strongly, and by the looks of things it’s going to be following the events of this book. So it will focus on the blood feud between Uhtred and Kjartan, which is all good. But if you’ve read the books you’ll know that this isn’t something that takes too long to resolve. I wonder what the show writers will have left because so far the rivalry is the most compelling part about the adaption. I think the characterisation of Uhtred’s uncle is rather weak in the show, and the competition between the two is not remotely intense.

There’s also the issue of aging. In just a few books time, Uhtred is already in his mid to late forties. I wonder how they will handle this on the screen with the actor being so young. He also looks a little bit too much like Jon Snow for my liking.

I’m interested to hear what other people who have read this series think about the television show. Do you think it's any good?

I love a good tale of revenge. I always find that they have some of the most intense plots; they always seem to rush past before my eyes. And it was good to finally see Uhtred set out on his own, with his own goal, with his own men, with his own quest for bloody revenge.

He dreams of it; he longs for it. His oldest enemy, Kjartan the Cruel, is within his reach. The two have a blood feud that must be satisfied with cold, sharp, steel. Kjartan murdered Uhtred’s adopted farther and stole his sister many years before. Uhtred has waited years for an opportunity to strike at his enemy. The warlord thinks himself safe behind the mighty walls of fort Dunholm; he thinks that no enemy would dare attack him there. But, his enemy is Uhtred son of Uhtred, the rightful lord of Bebbanburg. Kjartan’s is in for the fight of his life, but he also has bad blood with Uhtred. The old warlord will not go down easy; he, too, has a reason to hate his enemy.

Just look at the emotion in his eyes; it all stems back to the first book. 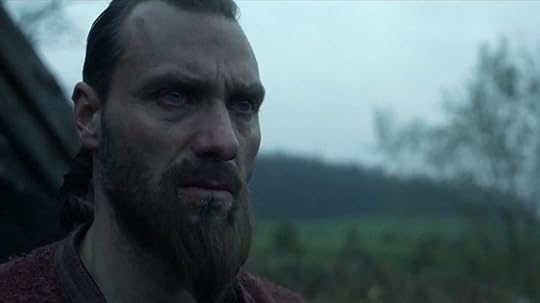 Uhtred doesn’t go alone; he goes with his brother, Ragnar the Younger, who has also sworn to avenge the death of his farther. Uhtred and Ragnar share a strong brotherly bond which has been formed by the need for Kjartan’s foul blood. To get it they need allies such as charming King Gurhtred who also wants Kjartan out of the way as he threatens his instable rule. He’s a weak king, bullied by monks and his subjects alike. They push him to do the “right thing” which means he is pushed to do the Christian thing. In the process he makes several weak moves that his enemies wish to benefit from. Only Uhtred and Ragnar cam strengthen the weakened kingdom and use it to kill their greatest foe.

The brothers have a mighty task on their hands, but their will for vengeance pushes them forward. Uhtred’s ever going identity crisis continues: he is a Saxon with the heart of a warrior Dane. He is slightly older with a little more experience, but he still retains his fiery attitude to life. His enemies have a lot to fear when he enters the shield wall or rides onto the battle field. This crisis is hampered more by his renewed friendship with his brother. He, too, longs for the possibility of fighting beside his brother, but Uhtred’s destiny lies elsewhere. He knows that when the blood has been spilt, he must return to Alfred the Great’s court despite how tempted he is to remain with his brother. 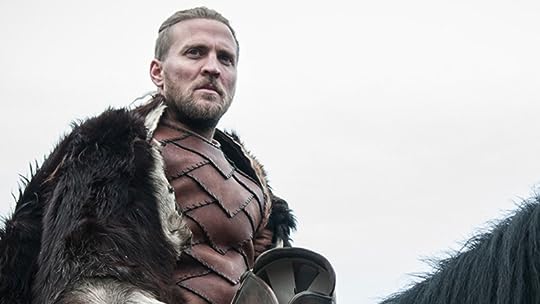 The retrospective tone of the novel adds a touch more humour to the character, as I can see how the aged Uhtred looks back on his youth with a smile. You can hear it in the narration. You can hear how he misses his days of war. I always know what I’m getting when I pick up another instalment in this series. The plots are structured in a very similar way, and adhere to a similar pattern. But, surprisingly, this isn’t a bad thing. In this case, it’s more of a good thing. I find it creates a sense of familiarity with Uhtred’s story. It would be too weird if one of the books didn’t fit this structure and style. I’ve seen a massive development within Uhtred in this book, like all of his books, he has become wiser in the ways of the world; he really is a fantastic protagonist. He is cocky, violent, ruthless and at times even stupid, but he is also compelling and I can’t help but want to see him finally takeback what was his. He will be the Lord of Bebbanburg one day. Well, hopefully. 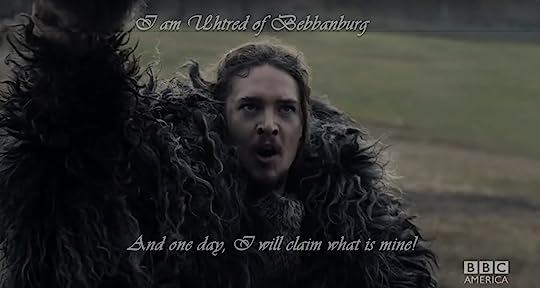 Danes and Saxons fighting over a piece of land that is soon to be known as England. This was quite a rough story in terms of trust, faith, and betrayal.

Promise to review as soon as possible

I had a super long review written for this series but I deleted the document accidentally so let me share with you at least some major points to explain my reasons for loving this series so much:

* Unforgettable narrator. Uhtred of Bebbanburg is unapologetic and ruthless yet lovable and admiration worthy character with brilliant military strategic mind. He is a true hero!

* Complex and fascinating side characters that you will love to come back to.

* Constant philosophical battle between paganism and Christianity that depicts given period precisely.

* War and fight scenes are chillingly realistic. I really felt like I was there with Uhtred, fighting every new enemy or being part of countless shield wars.

Moreover, I loved author’s note at the end of every book where author explained which parts were based on historical facts and which parts of his novel he made up.

Because fate cannot be cheated, it governs us, and we are all its slaves.

This book, by far, is the best in the series. Book one was heartbreaking and full of discovery. I cried a lot in that book. Book two was all about finding your place and figuring out where you need and want to be. Book three is all about BETRAYAL, REVENGE and CONQUERING.

I'm really at a lost for words. I could tell you about what happens but I went blindly into this, not expecting anything and got so much more than I could imagine.

Another good episode in the story. Uthred's story is more isolated in this one and we don't have the epic battles of the first two.

Uhtred makes me laugh. I like him and I get him.

Okay, if you have read my review of the first two books in this series, The Last Kingdom and The Pale Horseman, - and it would be most arrogant of me to assume that you have - then you will understand why I have started this review with those few simple words.
For those who have not read those reviews, let me explain.

I love this Saxon series of Cornwell's, I love the main character, Uhtred, I love the way Cornwell writes, I love this world he has brought to life for me and I love the whole blood letting, gorified (please excuse the fake word), lustful storyline.
Need I say more?
Hmm, yes, I think I will, but only a little more because I have said it all already in my reviews of the former books.

This book is so me. It really epitomises everything I like and want in an historical fiction. I wish there were scores more like it so that I would never be let down again by poorly written historical fiction books. That IS one of life's little pains in the arse. Bad historical fiction. Cringe.
Cornwell could not have written a book more suited to my likes and dislikes if he had tried. It is so close to my exact taste that I could nearly imagine that it was written for me, but, of course, it wasn't. Oh, and I don't mean that literally. Trust me, I don't reeeaallly think he wrote it for me. I am a fan, but not THAT kind of a fan!

I am in the middle of reading the next book in the series, Swordsong, and then I have the latest instalment (released in 2009), The Burning Land to go. I can't wait and hope Cornwell is working on another in the series after The Burning Land, because I don't think I will ever tire of Uhtred's story.


Get Social with BukRate