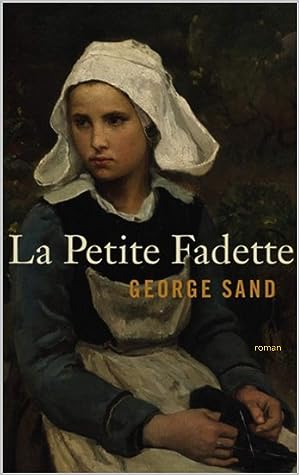 This work is in the public domain in the United States of America, and possibly other nations. Within the United States, you may freely copy and distribute this work, as no entity (individual or corporate) has a copyright on the body of the work.

As a reproduction of a historical artifact, this work may contain missing or blurred pages, poor pictures, errant marks, etc. Scholars believe, and we concur, that this work is important enough to be preserved, reproduced, and made generally available to the public. We appreciate your support of the preservation process, and thank you for being an important part of keeping this knowledge alive and relevant.

La Petite Fadette is my favourite among George Sand's pastoral novels. Like other novels in her pastoral trilogy (La mare au diable and Fracois le Champi), this one has a love story at its core.
However, this one seems more profound and substantial work than the other two. It is as the author was trying to write a story that will be not only romantic but also didactic. As George Sand herself says: ...“In times when evil comes because men misunderstand and hate one another, it is the mission of the artist to praise sweetness, confidence, and friendship, and so to remind men, hardened or discouraged, that pure morals, tender sentiments, and primitive justice still exist, or at least can exist, in this world.”

I felt like the author's voice is a bit stronger in this one. Moreover, I feel like La Petite Fadette comes with a message of hope and optimism. At one point in the book, George Sand writes: ...“God abandons only those who abandon themselves, and whoever has the courage to shut up his sorrow within his own heart is stronger to fight against it than he who complains.”. Similarly, Sand is quick to point out moral lessons: ...“No place is ugly to those who understand the virtues and sweetness of everything that God has made.” and ask the reader to look at what lies beneath the surface...“[I]t is that we are too apt to despise what appears to be neither good nor beautiful, and thus we lose what is helpful and salutary.” Indeed, the society is depicted as being very unjust towards the female protagonist of this book.

IF YOU DON'T HAVE THE TIME TO READ THIS REVIEW, HERE IS A LITTLE CAPITALIZED SUMMARY:
Things I liked about this book:
-A MEMORABLE FEMALE PROTAGONIST
- THE REALISTIC CONFLICT BETWEEN THE HEROINE AND RURAL SOCIETY
-INTERESTING STUDY OF TWINS' RELATIONSHIP
-SOME INTERESTING CHARACTER DEVELOPMENT
- SOMEWHAT SATISFYING ENDING
Things I didn't like about this book
-PREDICTABLE PLOT AND CONVENIENT/UNREALISTIC PLOT SOLUTIONS
- BLACK AND WHITE CHARACTERIZATION
- SLOWNESS OF NARRATIVE TOWARDS THE END
- THE ROMANTIC LAZINESS OF BEHALF OF THE MALE PROTAGONIST
As you can see, there is more that I liked than I didn't like. Back to the review.

A MEMORABLE FEMALE PROTAGONIST IN CONFLICT WITH RURAL SOCIETY
The protagonist of this novel, a young girl named Fadette, makes for a wonderful protagonist. Similarly to Marie in La mare au diable, Fadette is extremely poor. It could be said that the Fadette is hardener by life and thus very resourceful and intelligent. Another thing she has in common with Marie of La mare au diable is that (A SLIGHT SPOILER) a rich peasant falls in love with her. However, Fadette's character has more of a character development. While it is true that Fadette is an idolized character (all of Sand's pastoral novels have black and white character), Fadette's hard conditions make reader sympathize with her. Personally, I found it very convincing how the hatred of the village was turned to Fadette for no other reason besides her being poor. Fadette helps other peasants and even cures them, but they still hate her.

This hatred for Fadette (and her unfortunate invalid brother) was the most realistic part of the novel for me. It is a step back from idolizing pastoral life. George Sand writes more seriously in this one, showing how growing up in a rural community can be absolute hell when you're a poor girl raised by an old grandmother who is considered a witch. This novel shows how closed communities can be extremely cruel and this is a far more realistic story-telling if you ask me. People in the village are so used to making fun of Fadette and her brother, they no longer question it. In regards to the pastoral setting, this novel definitely makes more sense as it shows both the strong and weak sides of its residents.

I can understand why some feminists don't like Sand. Within her pastoral novels, all of Sand's female protagonists (Mary/Marie, Fadette and Madeline) are always extremely virtuous and non-sexual. They seem to have no notion of their sexuality whatsoever, rejecting even thoughts of it. I feel like some people expect something different from Sand, due to her more liberal lifestyle, and those readers will probably be disappointed by this novel.
INTERESTING STUDY OF TWINS' RELATIONSHIP
Besides Fadette, the most important characters in this novel are twin brothers. I felt like theirs was an interesting relationship. It raised some fascinating questions about friendship and love. ...“God has written in the law of nature that when two people are joined in love or friendship, one must always give his heart more perfectly than the other.” When it comes to other characters, they are portrayed well enough for the needs of this story but none are especially memorable.
A PREDICTABLE PLOT WITH MANY DEUX IN MACHINA MOMENTS
Now, when it comes to the plot, I must admit I didn't care much for it. It wasn't as predictable as her other pastoral novels often were. By that I mean that there were a few minor surprises. However, there were far too many 'deux in machina' moments. Things work out too conveniently for our protagonists. When things need to work out so that our protagonists be happy, they do- no questions asked. In that sense, La Petite Fadette reminds me of traditional oral literature. The good always wins and the bad is always punished. Still, it was an interesting story to read. There was definitely some character development in this one, more than I expected. I read this one immediately after Sand's first pastoral novel (La mare au diable) and it was definitely an improvement. Although you can kind of tell the ending from the start, there is enough depth in La Petite Fadette to keep the reader's interest.
CONCLUSION
Despite being predictable in its narrative, La Petite Fadette is a novel that is well worth the read. There are some sound moral lessons in this one but the tale itself isn't overly moralizing or boring. There is some character development and the ending makes sense. Fadette is a wonderfully brave and honest heroine. To conclude, La Petite Fadette is an easy and a memorable read. I do recommend it!

A few years into her career, George Sand wrote three charming pastoral novels that are now among the most popular and enduring books in her huge oeuvre. La Petite Fadette (1849) is my favorite among this trio, although the other two, La Mare au Diable (The Devil's Pool) and Francois le Champi, are delightful as well. Since Sand had inherited her father's estate of Nohant in the Berry region of central France, and lived there more than she lived in Paris, she was intimately acquainted with the peasants of the region--their daily lives, challenges, poverty, fears, folklore, etc., (In her later years, Sand was known as "la bonne dame de Nohant" because of her charity and aid toward the local people). Because she knew the peasants so well, her portraits of them are realistic, and do not drift off into idyll. Sand also saw in the rural lower class--despite their superstitions and primitive belifs--a nobility far superior to the artificiality of Parisian society. She also depicted the Romantic aura of the peasants'lives, richly imbuing their their daily routines and emotions, so closely linked to the rhythms of nature and the seasons, as a kind of wisdom.
La Petite Fadette begins with a description of the childhood and young adulthood of identical twin brothers Landry and Sylvanet. When Landry is sent away to work on a neighboring farm, he meets 15-year-old Fadette, an exuberant tomboy who lives wth her grandmother, who is reputed to be a witch. The so-called "witch craft" plays an important role in the twists and turns of this clever, alluring romantic tale.

"La Petite Fadette" is the first novel I've read by George Sand. Although I had, several years ago, read the first half and then abandoned the exercise, leaving me to start all over again with my good intentions, it was noticeable that I had stopped just before the book became more interesting, when Fadette appears on the scene, for it had not been very exciting up to the first half. Why not? I got the impression I was reading a version of Voltaire, "It is the obstinacy of maintaining that everything is best when it is worst.” I kept hearing Bernstein's music in the back ground as well every time I nosed through another 50 pages. One cannot argue that Sand was lacking talent as a writer, no she excels; it's just that she is hampered by the conventionality of the time, and underneath it all I get the impression that there is a Emma Tenant or Jeanette Winterson lurking nearby. By this reasoning I can also fathom why she was called a feminist of her times, and yet nonetheless I am not terribly motivated to read more of Sand's work.

I think very simply that this is such a cute book and I really love the story that George Sands wrote. Fadette was as lovely as a new fresh wind in the scene of countryside. I also like the twin, too. They was so different from each other and I surprised a little bit in the end. Landry was kind-hearted as he was before and Sylvainet changed so much. Finally, a happy opening ending made everything to be like a fairy tale. I smile for all of them.

A wonderfully written, moralistic tale. Sand touches on subjects such as judging others by appearance alone, malicious and harmful gossip, looking down on others less fortunate, a true Christian heart vs. going through the motions, jealousy and selfishness. As usual, she also paints a vivid picture of 19th Century rural life, from a keen sense of the outdoors right down to old world superstitions.

BEAUTIFUL story. I love the writing (of course). It's very annoying when an author "spoon feeds" information. George Sand withholds but gives just enough information to imagine what his characters are feeling and thinking. In that day and age she was very brave for writing about the subjects she chose. Very risque at that time and still so poignant today.

A very touching rural story telling the story of "little" Fadette and 2 twin boys who are looking for her attention and further love.

God abandons only those who abandon themselves, and whoever has the courage to shut up his sorrow within his own heart is stronger to fight against it than he who complains.

A charming romance story between two teenagers in the 19th century French countryside.