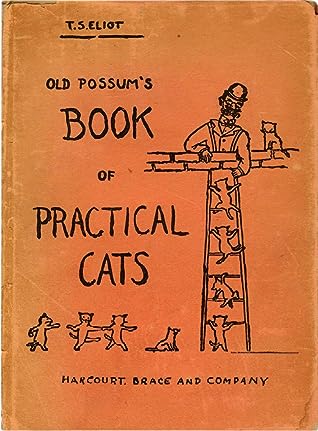 A CAT’S A CAT!Before a Cat will condescendTo treat you as a trusted friend, Some little token of esteemIs needed, like a dish of cream;And you might now and then supplySome caviare, or Strassburg Pie,Some potted grouse, or salmon paste - He’s sure to have his personal taste.A Cat’s entitled to expectThese evidences of respect.

I don't know how to review this book. lol it was so odd.

Someone should set this to music.

T.S. Eliot is known for masterworks of poetry like The Waste Land, but somehow also the author of this delightful collection of cat poems. The full book consists of 15 very short poems, most of which describe a distinct personality of cat. There's the cat who can never be pleased, for example, the thieving cat, the old wise cat. Each cat has a creative name which mirrors their personality.

Eliot's poems are the source material for Andrew Lloyd Webber's musical Cats which is what inspired me to pick this up. I've never seen Cats but from my understanding Eliot's poetry is heavily utilized in the musical, both as character and lyrics. I'm not surprised. The poetry has a distinctly sing-song quality to it, with some refrains repeating like choruses. Each "character" jumps off the page and presents themselves divinely for the theater.

It's been a long time since I've read T.S. Eliot, and the previous experience was much more grueling than reading this. Old Possum's Book of Practical Cats is not meant to challenge the reader. It's meant to be whimsical, for children and adults alike. Even if you rarely enjoy poetry, this will surely warm your heart. A great way to spend 30 minutes, and good preparation for the new Cats movie.

A quite funny and brilliant book of poems about cats. I had no idea that this was the inspiration behind the Cats musical until I read the back cover!

If you're a cat-lover (as I am), then this is a must-read for you! This is a charming book written in verse, and each chapter is dedicated to a different kind of cat with its own kind of personality. This just goes to show how many personalities a cat can really have and I loved it :)

Okay, after I finished reading this classic, I decided to gird the proverbial loins and watch the Tom Hooper movie for the first time. Well aware of how awful and derisive the reviews had been, I fortified myself with a good few glasses of shiraz and my TV blanket. I mean, Vanity Fair actually ran an article entitled: ‘The Cats Catastrophe: Is Tom Hooper Going to Director’s Jail?’

Much to my surprise … I kind of liked it. The ‘jellicle cats’ riff is pretty in line with the plot (as it is) of the musical. There are a lot of in-jokes and references, such as a sly nod to The Wasteland, and for some reason I kept of thinking about A Clockwork Orange while watching it.

There is a weirdness and a manic energy that is quite infectious. Admittedly the hyper-sexualisation of Eliot’s text is eyebrow-raising, and means this is certainly no Pixar movie. The casting is mainly spot-on, especially Judi Dench and Ian McKellen.

I’m not sure the CGI is entirely convincing, as these cat-human hybrids seem much more of the latter than the former (the meowing is definitely unconvincing; Dame Judi Dench throwing a ham bone made me guffaw out loud).

A lot of the scale seems off, and there is a demented aspect to the production design. All of this is definitely deliberate, and does make for one of the strangest movies I have seen in a long time, even though it is based on such a well-known book.

Nothing though will ever be able to tarnish Eliot’s magical verse. And I have to say that Hooper does a pretty good job in outdoing the bonkers quotient of the musical, which certainly is no mean feat.

So I learnt something new on the first day of 2020... thanks to my Mum, I know now that this collection of fun and light-hearted poems on cats inspired the famous musical Cats. My favourite poem was the one on Macavity which was fun to read aloud and create some good rhythm to it. The rhyming for the majority of the poetry worked really well for me.