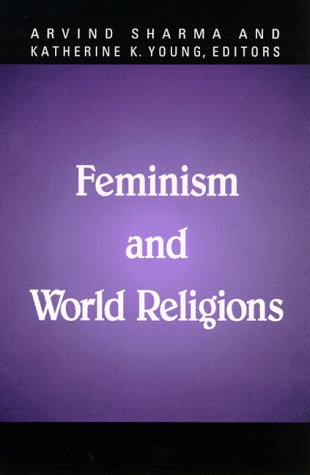 I picked up a copy of Feminism and World Religions Edited by Arvind Sharma and Katherine Young at the UW library. It contains three articles on religion that I was interested in "Strategies for a Feminist Revalorization of Buddhism" by Rita M. Gross, "Confucianism and Feminism" by Terry Woo, and "Feminism and/in Taoism" by Karen Laughlin and Eva Wong.

I also read the introduction. I think of myself as a feminist, however, sometimes I have a problem with some of the theories that get put around. But then I think most feminists find themselves in that position every now and then. For the most part I found myself agreeing with everything that was said and that made me very happy. The only part I had trouble with was when she was discussing the idea of writing about religion from and insider vs. outsider perspective. The idea Young presented seemed to be saying that an insider perspective was always superior. I have to say I disagree. I got my Associates degree from a Christian university and was taught religion, doctrine, and theology from and insider-insider perspective. However since leaving there I have found many more interesting books and ideas written by non-Christians that have been much clearer, historically accurate, and informative than things I've studied in the past. As far as the outsider perspective being wrong, Young talked about Salmon Rushdie learning about Islam from his studies at Cambridge university. She seemed to me to be implying that perhaps if he'd not learned it from the "outsiders" he wouldn't have become a heretic. Very odd. I find the whole idea of "insider" and "outsider" troubling. Perhaps as it's because I am an "outsider" studying another religion, however I've studied my own culture and now am looking at another. I see it as looking for the common humanity in the world. I don't want to see insiders and outsiders in my work. I want to see a complete world view of what it means to be human, what struggles we have, what we believe in, why we believe that. I don't think there's one correct world view, or ideas behind it all, but rather by looking at other cultures and trying to understand I think all of humanity learns more about itself and lessens the divisions and suspicions we have about one another. But on to the essays.

Rita Gross' essay was an interesting look into Buddhism from the perspective of feminism. One of the things I found the most shocking was her example of attending a Buddhist Christian encounter conference in 1980 and
certain Asian male Buddhists state that feminism might be relevant for Christians, but it certainly wasn't for Buddhists, since Buddhism, by virtue of holding out the promise of male rebirth for "deserving women" had already recognized and solved the problem of male privilege

I have to say I was speechless when reading that. What do you say to something like that? I have to say I really liked her answer,
The feminist would eliminate the conditions ,especially male privilege that make femaleness a liability, recognizing that femaleness itself is only one variant of the human, not a deficient state of being. And "deficiencies" that might be perceived are not intrinsic to femaleness, but the result of causes of conditions of patriarchy, and male privilege. Furthermore at most all the traditional interpretations of the doctrine of karma could do in this case is explain the current situation;it cannot be used to justify continued mistreatment


Gross then goes on to look at key issues of Buddhist faith and show how they are shown to show that gender shouldn't be an issue in the religion, and the fact that it is needs to be re-evaluated for the benefit of all Buddhists. Her essay focuses on the teachings and the way things are today and how they need to change, giving women full access to Buddhist institutions and practices being a large part of it. Her essay was interesting and informative and I am very tempted to track down the book she wrote on the subject, Buddhism after Patriarchy; A Feminist History, Analysis and Reconstruction of Buddhism

Terry Woo's essay on "Confucianism and Feminism" was a little odd. I found myself at odds with what she was saying almost instantly. She said how feminist criticism of Confucianism were based completely on Western images and Western writings. How due to missionary writings on foot-binding and infanticide a purely western criticism had grown up around China's treatment of women. This is something I took issue with knowing of Chinese women, and Chinese men, throughout the whole of the 20th century who wrote about the plight of Chinese women in traditional society and how it needed to be improved. She also didn't say anything to discredit the accounts of foot-binding or infanticide and how these contributed to the low position of women in Chinese society.

However, what I did agree with her was the idea that the way women were treated in the Qing was not the way it had been throughout Chinese history and that there were definite difference and changes that happened over time. However the fact that women were in a inferior position, as they were throughout the world, is something that is never in dispute.

In the Han she talks about how Tung wrote that women should be separated from politics, however she argues that saying "a wife as empress gives assistance to her husband" as evidence that a woman had political power, however there is not enough evidence here for me to see that it was political assistance she was giving him, it could as easily have been making his tea, or rubbing his back, or singing a song to ease his troubles. Likewise with the same author she states how through marriage "influence can be legitimately gained" however this influence, if the history of the Han has taught me anything, was largely for the Male relatives of the concubines or wives chosen who took positions of power based on their sisters or daughters marriages rather than much real power that was given to the women. Empress Lu being a counter example but Woo talks about how Lu was hated by the Confucians.

In talking on matters of marriage and divorce, issues of divorce are shown to be acceptable in extreme circumstances, however nowhere are the laws mentioned that show that a woman has any right to divorce her husband on the above mentioned grounds. Again this is a case of quoting the works of a few writers who are going against societies norms and concluding these to be the Confucian view over those of society.

Woo spends more time on the Han Confucians than the Neo-Confucians in the Song. There the most interesting point she made about Chu Hsi was how he is said to have prohibited women from becoming Buddhist or Taoist nuns, claiming this was an unfair mixing of the sexes. Of course men were still allowed to practice their religion but women were not only forbidden governmental office but also a religious vocation as well.

Interestingly enough when she turns to the 16th century Woo finds in Lu K'un a voice supporting the ideas of women and equality. However he does so in a way that is contradictory to the ideas and the customs of the state and society. He, like the later Western Missionaries, is highly critical of the treatment of women, including the infanticide of women. Though I do question Woo's statement that Lu K'un was writing for "the women on the street" as surely literacy rates among women were not that high during the 16th century. Rather than counteracting the idea of women's oppression in China the fact that Woo only had one author who spoke out against it seems to have the effect of confirming the viewpoint she was criticizing initially.

While I think it is important to look at the variation of the history of women in China, and how Confucianism has grown and changed over the years, rather than see it all as it was in the late Qing, I think a clearer definition needs to be drawn when analyzing what is meant by "the Confucian viewpoint". I think you have to take the ideas and values of a society into account as well as the ideas and writings of a few, mostly male, statesmen and philosophers.

"Feminism and/in Taoism" by Luaghlin and Wong was a pretty interesting article contrasting the ideas of feminism with Taoism and finding as many occurrences of similarity between the two as possible. The article started inauspiciously with the authors describing how their male teacher taught them how Taoism would differ for men and women and what they might expect as women. Rather an odd point of view for Feminists to accept from a man I thought.

The essay looks at the history of women in Taoism. How they have always been given the same opportunities or potential for achieving the way, how Taoist cannon contains works written by women, and for women and how there is a strong tradition of female adepts and immortals withing Taoism. However the authors do little to address the huge gap between the number of materials by men, and the number of male immortals and adepts when compared with women. The authors never look at the actual historical situations they are describing, never give an example from real life referring to what life was like as a female adept, rather preferring to relate fictional stories as their standard of equality. They also do little to relate what the standards of equality are for women today within Taoism, nothing at all like the work done by Gross on her study of Buddhism.

When sexism does occur in Taoist literature then it gets dismissed as "Chinese Confucian influence" (rather amusing as this essay came right after the Confucian essay. The essay focuses nearly all it's energy on the practice on "internal alchemy" within Taoism. The authors look at the practice, in particular the idea of "slaying the dragon" or stopping a woman's menstruation as being the ultimate goal.
"when through training the breasts become like those of a virgin before puberty, then a woman's body is transformed into (becomes like) a man's

To me this sounds awfully like the Buddhist idea referred to earlier of a woman being able to achieve transcendence by becoming male, and takes away from the whole view of equality the authors are trying to portray.

The two authors also totally fail to address the historical aspect of Taoism. How frequently the idea of equality, embracing the feminine, becoming weak, passive, was a reaction against the norms. Often ideals of women were not held up as examples for women but the idea of shaming men for not being able to achieve what women could. Turning the ideas of the natural world on their head to achieve a different perspective and understanding.

On the whole I think the essay on Buddhism was the best. The Taoism was an interesting, though rather narrow, look at the intersections between it and Buddhism. The essay on Confucianism I admire for it's efforts to go back and look at the history behind an ideology, however felt it looked too much at individual's views over society as a whole.

Everything is brilliantly linked together.