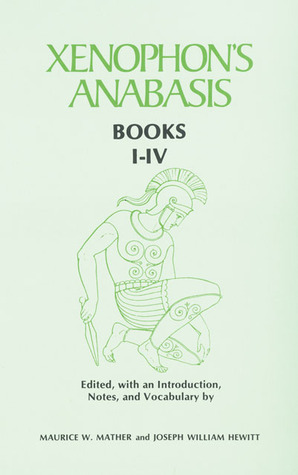 Xenophon the Athenian was born 431 B.C. He was a
pupil of Socrates. He marched with the Spartans,
and was exiled from Athens. Sparta gave him land
and property in Scillus, where he lived for many
years before having to move once more, to settle
in Corinth. He died in 354 B.C.

The Anabasis is his story of the march to Persia
to aid Cyrus, who enlisted Greek help to try and
Xenophon the Athenian was born 431 B.C. He was a
pupil of Socrates. He marched with the Spartans,
and was exiled from Athens. Sparta gave him land
and property in Scillus, where he lived for many
years before having to move once more, to settle
in Corinth. He died in 354 B.C.

The Anabasis is his story of the march to Persia
to aid Cyrus, who enlisted Greek help to try and
take the throne from Artaxerxes, and the ensuing
return of the Greeks, in which Xenophon played a
leading role. This occurred between 401 B.C. and
March 399 B.C.

If I could have lunch with any person from history I think that Xenophon would be in my top five. He was so amazing, his spirit so impressive, his writing so eloquent, his actions so monumental. This account is beautiful. The rhetoric is stunning. It is so informative about ancient Greek military tactics, about the importance of omens (down to a sneeze during a speech), and the general disposition of ancient man, that it is an absolute must read for anyone interested in classical antiquity or military history. My favorite parts are the long speeches, they are so emotional and raw, and just breathtaking.

1.5 stars, DNF @ 22%.
I didn't hate this book. I was just unfamiliar with everything about it. It was all too strange to be enjoyable or informative.

I chose this ancient Greek book written in ancient times because of my alphabet reading challenge for the letter 'X'. It was fun and different in the beginning, but it quickly became a drag and boring to read.

I just got lost in the unfamiliar names, even weirder place names of places with different names in our time etc. And now it's too much of an effort to get into it after putting it down for a few months. At least I managed to try something way outside my reading comfort zone and I'm proud of that.

Xenophon's account of the march up country through Persia is remarkable. In 401 B.C., Xenophon joined a mercenary force attempting to win money and glory in an effort to install Cyrus, the younger brother, on the Persian throne. The expedition was unsuccessful. A force of 10,000 Greeks found itself in the middle of hostile territory, pursued by the king's army. Soon all the Greek generals were tricked and executed, and the Greek forces were forced to appoint new generals. After many troubles, the 10,000 succeeded in crippling the Persian forces and getting home. This march through the heart of Persia also exposed the weak underbelly of its empire. It was probably known to Alexander the Great, who would conquer Persia a generation later. This edition gives you the first four books, roughly half of the Anabasis. It includes all the vocabulary and some commentary. There are several good translations of this, which I would also recommend.

A unique tale, and definitely fascinating. This book has a lot of information about ancient greeks and other peoples in Anatolia, Syria, Armenia and Mesopotamia, and it explains a lot about the military tactics employed by the greek heavy infantry.

The story is an impressive and exciting tale of perseverance. I found it a bit slow to read at the start and at the end, but it's fascinating just to read a text that is 2500 years old.

The Anabasis, written by Xenophon of Athens in the fourth century B.C., chronicles the expedition of ten thousand Greek soldiers, led by Cyrus the Younger, and the subsequent return to Greece of the contingent, after the death of the satrap at the hands of his brother Artaxerxes. It is one of the greatest epics in history.

As a history lover, I would like to make a special reference about Xenophon, as it can help to better understand the work.

Xenophon was born in Athens in 431 B.C., was a Greek military and writer, known primarily for his works on Greek history and culture. Among his historical and biographical works, in addition to Anabasis, Ciropedia, Hellenica, Agesilaus and On the constitution of the Athenians, he also wrote dialogues of a philosophical nature, such as the Economic, The Banquet, Apology of Socrates or the Iron (I'm sorry if I skipped any).

He was a disciple of Socrates, which had a great influence on his life and his work. In fact, as Anabasis says, before joining the Greek mercenaries on the way to Persia, he asked Socrates what he should do, whether to leave or not. The philosopher advised him to appear before the Oracle of Delphi. Cunningly, Xenophon asked the question so that the answer could only be favorable to the trip. Socrates rebuked him for acting in this way, but told him that he could only obey the oracle. Thus, Xenophon was enlisted with the mercenaries of Cyrus.

I hope that I managed to awaken your interest, this book is certainly a must-read.

I read this puppy in year two of Classical Greek. After five days a week of Greek in year one, reading everything Dr. C. B. Earp threw our way, three days a week reading history seemed like a breeze. And it was an interesting narrative.

Unforunately, it didn't prepare me for the next year, reading Plato in the original language, where I languished for nearly a week on the first paragraph.

Anyway: fascinating story of brave men trying to get back home.