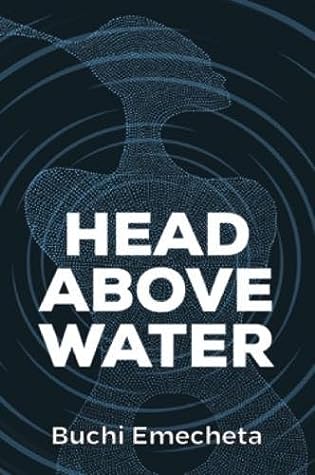 The author, Emecheta, who died some days ago, was certainly one of Africa's all time great creative female writers, alongside the likes of Ama Ata Aidoo, Flora Nwapa, Bessie Head, and Sindiwe Magona. But many would reckon Emecheta as the greatest since her output was astonishing, well over ten world class novels. Ironically Head above water is auto-biographical, revealing many aspects of this astonishing woman, how she triumphed against all odds. We can see that she is a personality with so much belief in herself, great endurance and fortitude, doing everything to single-handedly take care of all her children after landing in London. She has her own principles and ideas and can be termed a "powerful" woman, certainly her achievements attest to this. She just goes on and on, spreading her wings, even adding drama to her literary corpus, etc - all with a strong determination. Yet her great talent should never be underestimated, she was a born writer and proved it over the decades. In this book for example, she has a disagreement with her daughter, who promptly announces that she would be going to stay with her (estranged) father! This shocks her mother very much; yet this galvanises her to swiftly write a wonderful novel titled The joys of motherhood - about a long suffering mother! This episode demonstrates how much of a creative, skilful writer the author is, creating another enduring work spurred by what was a painful episode in her personal life. This is a very powerful autobiography.

An extraordinary woman, no doubt. What amazing achievements. Her love for writing gave her life focus, and complemented a great Mother and inspiration

3.5 starsBuchi Emecheta (1944-2017) was a natural storyteller, and by the time she wrote Head Above Water, her reputation had been established. While I enjoyed reading this book, this edition reads like something that received absolutely no editorial care: there are many typos, and a number of the chapters feel rushed.

Head Above Water is the true story of a young ambitious Nigerian woman who at nineteen moves (with two wet and dripping babies) to London to join her husband. What she sees at London is more than she bargained for. The author struggles through an abusive marriage (in which her husband does a lot of unprintable things including burn up her first manuscript). The marriage ends in a divorce. And her husband denies paternity of all their kids and she is stuck in a strange land without a real job or a university degree. And so Buchi learns to grow a tough skin to keep her head above water.
It is a story of survival, of perseverance, of persistence. By some miracle, she is able to single-handedly raise five kids while studying for a sociology degree. Even when she fails her first semester exams, she doesn’t give up on pursuing her dreams to become a writer or on her dreams of getting a university degree. And it is amazing how she manages to accomplished so much in the end.

But I think Buchi Emecheta withheld some information about her relationship with Chidi, a long-standing male friend who stood by her in a way that almost moved me to tears. When she refuses to marry him, the reader understands only a bit of it, especially because she considers her children’s interests first. But she doesn’t really talk about the real nature of the friendship with Chidi. Her reluctance to explain the relationship made her writing sound prude. Perhaps, at the time the autobiography was written, Buchi Emecheta was still trying to gain perspective of the relationship because it seemed to there was a world of possibility that they would still get together later on in life – maybe, when the children would have grown.

It is an inspiring story especially for budding writers who feel discouraged by rejections, failed relationships, and other challenges. Head Above Water makes the reader feel that everything is accomplishable if they persevere.

If you have ready many of Buchi Emecheta’s books, you’ll realize upon reading the foreword of the autobiography that you will be seeing a few repeats in different chapters of the book. But it feels even more rewarding to read those anecdotes in this autobiography. Buchi’s writing is refreshingly unique, witty and attention-grabbing.

A wonderful book that should be read by every writer, aspiring or established, in Africa. Emecheta is established as one of the most important black writers in the world, and this autobiography of hers explains how the literary miracle in her life took place, despite daunting obstacles. I always personally recommend this book to all budding African writers I know.A must-read.

Buchi Emecheta had a hard life, but I found myself losing sympathy with her as she seemed to dwell rather too much on the "poor me" side of things. She is undoubtedly a strong woman who fought for her place in the world against the odds of tradition, racial prejedice, low expectations of blacks in Britain and women in particular, meanwhile bringing up her five small children alone. However, I came to feel that I would not like her very much, as she was pushy, demanding, emphasising constantly how she sacrificed herself and pushed herself to the limits. Due to the success of her first book, she seems to have become a cause celebre in the world of black literature studies, and has undoubtedly been feted at institutes of education, and I suspect that she has been made to feel more important than she really is. I had never heard of any of her books, I had never heard of her before, and so I found her attitude irritating. Her achievements are many, but I am sure many people have made a similar journey, but whose success is less well-known as they haven't written a book about it.

Description of England as “a country where people cry in their hearts and not with their eyes”, and describes it as “this indifferent society”. The experience of arriving into the cold weather of England: “It felt like walking into the inside of a grave.”
p.18 – “I was the daughter of scantily educated parents who came out of their innocent yet sophisticated bush culture, ignorant of the so-called civilized world. Yet in communal caring, and mutual sharing, and language gestures and music-making, they are unsurpassable in their sheer sophistication. But they had to leave all this, my parents, in search of this New Thing that was coming from places afar. ….. I was trapped in this New Thing.”
Describes the impact of Enoch Powell’s Rivers of Blood speech: “He has suddenly woken one morning with a vision of the River Tiber bubbling with blood. And he claimed that if the blacks were left to stay in England, the streets of England would be flowing with blood too. He did not explain whose blood it was that was going to flow, whether that of the whites or the blacks, but he successfully injected anxiety and insecurity into the minds and homes of blacks, and made some liberal white British rather uneasy.” Parallel with Geert Wilders!!!!!!!!!!!!!!!!!!!
www.bookcrossing.com/journal/7805421

Even though I had bought this book a while back, I never found the cover illustration and the blurb alluring enough to read it. Until I opened the book and read a few lines and that was all it took. Yes, the typical case of not judging a book by its cover.

I enjoyed the writing style, like she was sitting in front of me and telling me a story. Just like her Aunty. I admired her strength, tenacity and above focus. She didn't set out to become this world-renowned author, no. Her vision at each stage of her life was at most 2-3 but the over-arching vision was to be a storyteller.
That almost blinding focus / visions to tell storys and be a good mother to her children led her into fame.

I agree too that there was more to her relationship with Chidi. ?
My greatest lesson : horn your vision or purpose. Don't be an octopus.

I had the pleasure to read Buchi Emecheta's book last year for English Literature at university. The way she described the main character, Florence, and how this clash of cultures happens both inside her head and outside in the girls' school and in her inner circle was something that captivated me and had my attention from minute one. Florence was born in the civilized world but everyone made sure that she never forgot that she was not a child of the civilization where she was living. The problem is that she had managed to play both to perfection, she was both a village girl and a city girl. She had the same dreams as any one would have. She wanted to write and she did not understand why she could not achieve her dream, why her teacher had seen it as something impossible and unreachable. Florence did not feel sorry for having said what she wanted to become when she would grow up, she had a dream and went for it. This is a particular quote from the book that summarizes Florence's aspirations and dreams:
"I so wish to be a writer, a story teller like our old mothers at home in Ibuza. But unlike them, I would not have to sit by the moonlight because I was born in an age of electricity, and would not have to tell my story with my back leaning against the Ukwa tree. I have learned to use a new tool for the same art. I have learned a new language (...) where is the sin in that?"
I cherish this book, African literature has helped me to listen to these new voices that I had never heard or read before. I could learn from the actual witnesses what was going on, how their story changed them and helped them break those barriers they had. Buchi manages to make us readers feel everything that is happening to the characters, to identify ourselves with their problems, their emotions, we can become these characters and relive the entire tale as if we would be in those book pages.

I'm biased about this writer who I've had the pleasure of spending time with in London and in New York. However, this autobiograpy is at the top of the list of her books for me. Her story is one that anyone facing and overcoming the inevitable challanges to success in their chosen field will be inspired by. Buchie became an internationally appreciated author and publisher while raising five children as a single parent in London after being abandoned by the husband she worked to put through university. Her books are on college reading lists as well they should be and published in many languages.