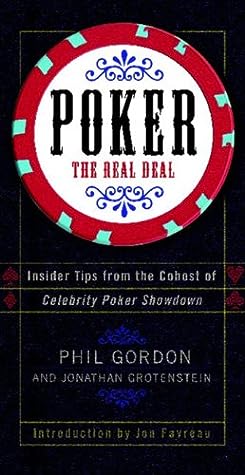 Poker: The Real Deal: Insider Tips from the Co-host of Celebrity Poker Showdown

The secret is out. Poker has become the hottest game in town. No longer viewed as the pastime of husbands seeking refuge from their wives, it is regularly played by an estimated 80 million people. Many play at home or online, but taking the game out of the kitchen and into the casino can be intimidating. That' s where POKER: THE REAL DEAL comes in.

World-class poker player The secret is out. Poker has become the hottest game in town. No longer viewed as the pastime of husbands seeking refuge from their wives, it is regularly played by an estimated 80 million people. Many play at home or online, but taking the game out of the kitchen and into the casino can be intimidating. That' s where POKER: THE REAL DEAL comes in.

World-class poker player and co-host of the hit show CELEBRITY POKER SHOWDOWN Phil Gordon has paired with writer Jonathan Grotenstein to write this comprehensive guide to the game. In addition to introducing the most popular forms of poker and explaining the intricacies of this game of skill, they describe the ins and outs of poker psychology and groom the reader, from home player to seasoned professional, in a single volume. They examine the different breeds of players from the Rock to the Manic, detail what to wear, drink and tip, and profile the legends of the game with tips from some of the biggest names in poker today.

This definitive guide to poker provides a rare inside look at the game in language accessible to players of every level.

The leader of the Tiltboys tells all...

Gordon and his co-writer, Jonathan Grotenstein give us the world of poker from its history, to how to play, to a fantastic finale at the World Series of Poker No Limit Hold'em Championship written in the third person. One gets the sense that Gordon actually experienced this adventure, and is telling it in the third person so that the reader's involvement is enhanced--that is, until we get to the final hand, which results in a "suck out" unlikely enough to rival any from the movies (with the possible exception of the final hand in The Cincinnati Kid 1965).

Phil Gordon knows poker and not just as a TV host. He's a professional player who's won tournaments on the World Poker Tour and once finished fourth in the WSOP Championship. His knowledge and experience show in the advice he gives on how to play and in his general comments about the game and the players. When he talks about e.g., showing cards or revealing "tells," he often includes a story from his own experience illustrating the point being made. In his third person fantasy at the World Series of Poker, he has YOU showing your hand after a daring bluff that so rattles the guy who threw away the winner that the poor soul goes on tilt.

But it's not all color and tall tale. Included is some very good advice on how to play the game, some of it psychological and some of it technical. An example of some table psychology is the "Presto!" phenomenon presented on page 145. What you do is play pocket fives and deliver a bad beat to another player (right, but don't hold your breath). Just after he calls your river bet you cry out "Presto!" and flip over your pocket fives. Gordon claims that this is so much fun that you can get a whole table doing it--and by the way, "creating a lot of 'dumb' money" in the process. (I want to be there when Gordon flips over his set of fives crying "Presto!" and the other guy shows him a set of sixes.)

An example of some good technical advice is this: "Playing ace-[rag]suited from early position is probably okay at most low-limit tables but can be a recipe for disaster in a game full of tight, aggressive players who will raise you--and usually beat you--with a better ace. Same goes for hands like J-10 offsuit and wired sixes." (p. 155)

One of the nice features of the book is "Your Defining Moment" in which Gordon sets a poker scene at a decision point and then asks you what you would do. Then he gives his answer.
For example, say you find yourself in a ten and twenty hold'em game with your boss. (How awkward is that?) You make an inside straight on the river. Should you raise him? (p. 149)

Even though this is an excellent book, I must point out some slips. Gordon writes that somebody using a computer figured out that Q7 unsuited, the so-called "computer hand," is "the worst of the profitable hands." (p. 61) He adds that it "is a pretty awful holding, and there's not a winning poker player in the world who would play it with any regularity." True, but the real significance of Q7 unsuited is not that it is "the worst of the profitable hands." Rather Q7 unsuited is the median strength hand. Half of the 169 poker hands are stronger and half are weaker. That is NOT the same thing as imagining that Q7 is some kind of minimal winning hand.

Gordon's statement that Chris Moneymaker "hadn't set foot in a brick-and-mortar, real-life cardroom before the 2003 WSOP" is incorrect. If you read Moneymaker's book on his unlikely elevation to the championship, you can see that although most of his experience was on-line, he did play in clubs prior to his entry into the tournament, and in fact arrived in Las Vegas a little early to practice in the clubs there.

Also in general Gordon's stories about poker in the old clubs in California are a little off. His tale from the mid-1970s about "Mr. Grey" being told by a floorman that all eight people seated at a game were "in cahoots, waiting for an unlucky ninth to join their game" is almost certainly not factual. (p. 137) For one thing splitting a sucker's money eight ways isn't much of a pay day, and furthermore, how long could such a ruse be maintained? Additionally, Gordon's reference in the same chapter to a $30/$60 draw poker game is at odds with my memory. First of all "California draw," as he calls it, was seldom spread since only the experts really liked the game. Mike Caro, the self-styled "Mad Genius of Poker," tired to get the game spread at the old Horseshoe Club, but with almost no success. The "tourists" preferred the easier to play jacks or better, or low ball. Second, when the state law against bets larger than $20 was finally lifted in the 70s, the big draw games were typically $5 ante with $25/$50 limits, not $30/$60.

Sayeth the River Master: a good read with some good advice from a couple of guys who know and love the game.

--Dennis Littrell, author of “The World Is Not as We Think It Is”