Home › Authors › Dodie Smith › The Hundred and One Dalmatians... 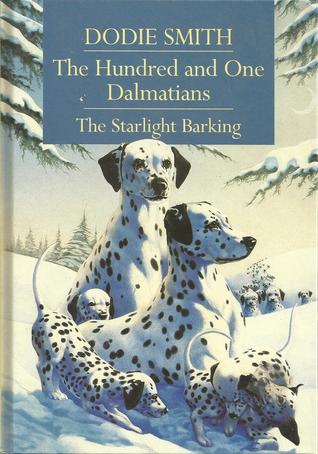 The Hundred and Once Dalmations

Pongo and Missis have fifteen delightful Dalmation puppies, who mysteriously disappear. The alert Pongo suspects a sinister neighbour, Cruella de Vil, and with Missis he sets out to find his family...

Pongo and Missis are now living happily at Hell Hall with most of their puppies. One summer day a 'mysterious sleepin 2 in 1

The Hundred and Once Dalmations

Pongo and Missis have fifteen delightful Dalmation puppies, who mysteriously disappear. The alert Pongo suspects a sinister neighbour, Cruella de Vil, and with Missis he sets out to find his family...

Pongo and Missis are now living happily at Hell Hall with most of their puppies. One summer day a 'mysterious sleeping' begins, affecting all humans and creatures except dogs. Something tremendous seems about to happen - but will it be good or bad?

I loved every second of my reading! I felt like a child again, watching the 101 dalmatiens movie ! The second story was also very entertaining !

As good as it ever was.

I loved Smith's original book, and both the Disney animated film and (although I wanted to hate it) the live action film. Each added new dimension to the original concept. So when I found there was a sequel to the book, I snapped it right up. But I'm still mulling it over - such an interesting and unusual story - and thinking about where could have been better. It takes the characters we love, puts them in a new situation, but the situation seemed so off balance at first.

Pongo and the Missus wake up one morning and, thanks to Pongo's ability to tell time (from playing with blocks years ago), discover it's after 10 in the morning and all the people are still comfortably asleep. (Not unusual at all for me, but apparently his people are early risers.) So are all the other animals - all but the dogs. Clearly something usual is afoot. What's more, it seems like the dogs are able to communicate clearly to each other from farther away than ever before - not by the old Twilight Barking we all remember, but by thought. Now all grown up and ensconced at #10 Downing Street, Dalmatian pup Cadpig is deeply concerned and is calling for help from distinguished dogs all over Europe. Of course her parents come from the country to help, and are confronted with decisions that will affect all the dogs, and ultimately the people, in the world.

Adding science fiction to anthropomorphism, Smith's story still has an immense amount of heart. I could see how the fantasy was necessary to get all those dogs transported over long distances quickly, and in and out of locked rooms, but it felt awkward, and in reading other reviews I see other readers also had difficulty with the contrivance.

However, her basic story, of a love that transcends love of self, is incredibly generous and warming. Written in 1967 - 11 years after the original - at a time of societal turmoil and change, I can understand how such an affirmation might have been important. That story is one worth finishing, however we, and the dogs, must travel to reach the end.

The first book, 'Hundred and One Dalmatians' was amazing, I loved every second of reading it and the illustrations were beautiful. The second book. 'Starlight Barking' I found much harder to get into and not as enjoyable as the first.

A nice short and fun read.