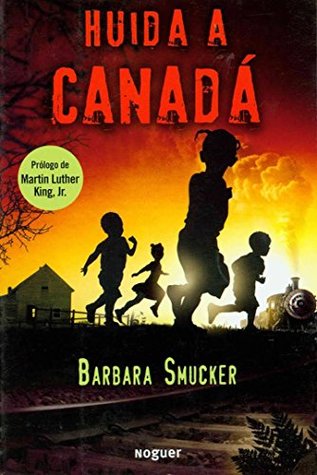 Barbara Smucker was a white woman. I feel that should be stated outright. While Smucker, I'm sure, had good intentions, these intentions were... woefully misguided.

Underground to Canada is a horrendously white-washed narrative of slavery about kind whites who help runaway slaves get to benevolent Canada, while presenting slavery to be some kind of marginally cruel bootcamp. That this novel is still widely circulated throughout the Canadian school system as the basis for education about black history is unfortunate, as the Slavery Lite™ it teaches is a gross misrepresentation of slavery, and for many children will likely be the only picture of slavery they'll ever get. I understand the rhetoric that the realities of slavery may be "too much" for young readers, but I have white cousins who, to this day, have a picture of black slavery in their heads almost entirely informed by this novel, a narrative that centers around a prevalence of benevolent slave-owners and mostly white heroes and a misplaced Canadian national pride. Ask most white children who read this book what their takeaway was, and it tends to be an empowering tale that teaches them that "if they were there" they'd have been one of the "benevolent whites," rather than just another unthinking cog in an institutional hate machine.

Smucker's heart was in the right place, but her book amounts largely to apologist nationalist propaganda, and should be swiftly taken out of the curriculum. If you're going to teach children about slavery, I think it's important that their first experiences with the subject be more representative of what slavery actually was, focus more on slavery itself rather than the white-aided escape narrative, and, perhaps most importantly, be actually written by a black person.

Reminded of this book with all the promo around Black History month. Very glad I picked it up to read. Smucker does an incredible depiction of life as a twelve year old slave girl, June Lilly, separated from her Mama Sally when slave traders come to buy up slaves at the plantation where she'd been born. Historically accurate and great introduction to key members of the Abolitionist movement active in Julilly's journey to freedom. Canada. The destination word on the lips of those hungering for more of life than whippings and beatings, broken spirits and battered bodies.

Alexander Ross, the first contact Julilly meets. A Canadian physician and naturalist, who intentionally chose his path of justice for the slaves. "In undertaking this mission to help the slaves to freedom I did not disguise from myself the dangers I would most certainly have to encounter, and the certainty that a speedy and perhaps cruel death would be my lot in case my plans and purposes were discovered." He used ornithology to cover his involvement in the abolition movement, spending time exploring for birds in the southern states whilst supplying interested slaves with information on the route and requirements to reach freedom.

During the gruelling journey, the escaped slaves also meet the 'President' of the Underground Railroad by which they're travelling. Mr Levi Coffin, businessman, Quaker, and Abolitionist who opposed, " the whole system of slavery, and conscientiously believe it to...reduce God's image to the level of a brute, to be bought and sold in the market as cattle or swine."

Which was one of the book's significant scenes for me. Slave children being fed with slop poured into a trough where they had to slurp it by mouth rather than learning to feed as humans.. horrifying.

Tension ran high throughout the story. A momentary relaxing then the imminent danger of sheriffs and bounty hunters looking for runaway slaves had me clenching my jaw or holding my breath. Excellent descriptions of the slaves' life hiding in caves, locating 'depots', meeting unknown supporters, on the 'railroad' to their future. Right to the very moment of embarking on the ship that would carry them across Lake Erie to Canada's shore and their new life. I emotionally celebrated every victory with our young heroines.

The arrival couldn't have been sweeter and the ending for which every lover of justice would hope. Including ever abolitionist of the Underground Railroad.

Fast and fascinating read. Highly recommended. For learning and for incorporating in living even today. In the words of the Abolitionist that set Julilly on her run to freedom, Alexander Ross, "Injustice is the weapon of evil men. Bur there are always brave and noble souls who proceed on the course of right and are impervious to the consequences. I feel rewarded for all my efforts, just to free the two of you."

Barbara Smucker came to Canada in 1969. She worked as a reporter, teacher and librarian. In 1988, she received the Vicky Metcalf Award for a distinguished body of writing. Smucker focused on the historical plight of minority groups. In Underground to Canada (1977), winner of the Canada Council Children's Literature Prize, the story of escaping black slaves... - Canadian Encyclopedia

the book was pretty good its about a slave whos seperated from her mammy and makes a friend name liza and theres three men who were seperated from there familys to there names were lester adam and ben and they go to this bad plantation were the c\slaves are treated really bad and only fed poorly.Then a man from Canada comes to the plantion saying that hes looking at birds and ask massa riley the owner of the plantion if he could take some slaves to help him look for theses birds and massa riley said he could and the man picked lester and adam to help him look for these brids.The man isnt looking for birds hes helping slaves escape an lester asks this man if he can get two other slaves to run away and lester pick jullilly and liza. They all get away but then they find out that this man that help them escape is in jail so another man picks them up at the bridge he gives them the secret password to know that hes helping them the man whispers a friend with a friend so they get in the carriage and the man drops them off at a barn and leaves.Then adam says they should go fishing so they do and then they get caught so jullily and liza have to run.They get to jeb browns house and find out that lester and adam escape and got to jeb browns house before they did and they get to canada and find out that adam died.When jullily and liza go to meet lester at a hotel were he works julilly finds out that her mammy sally is already there.

What i dislike about this book is how adam dies and that the black people can not go to schools in canada.

i liked this book overall because i thought it was so predictable but then something else always happen like i thought that adam and lester were caught but then find out that they actaully got to canda before jullily and liza.

I really enjoyed reading this book.

One of the themes in “Underground to Canada” is friendship. Liza and Julilly are best of friends – like sisters – and they can each only make it to Canada because of the other. Another thing that is highlighted in this novel is how dark and light skinned helped TOGETHER to form the underground railroad. Both were key factors in freeing thousands of slaves.

It was very interesting to read about the historical figures integrated into the plot, such as Alexander Ross, an abolitionist who disguised himself as a naturalist and gave slaves information on how to escape. Another example is Levi Coffin, who with his wife helped more than 3000 (!) slaves to freedom and even received the title “President of the Underground Railroad”.

A book I can recommend.

Read this book at school when I was about 13. I vaguely remember it but it seemed to go on forever back then. Its always remained with me though. Now my husband is a West African and so slavery is part of his and our sons heritage. I read it in one evening. An amazing book I couldn't put down. Brought the conditions of these slaves to life... kept having to remind myself that this kind of thing did actually happen and although it is a fictional novel it is based on an actual underground railroad to Canada. Its a shame this book isn't more well known (the library copy I read had been checked out 3 times since 1999) and Im not going to hesitate recommending it to anyone and everyone

I recognize that the author was trying to write a book for children about a difficult topic, but when you are telling other peoples' stories, you'd better do your darn research and think a while.

A sanitized introduction to the appalling slave trade in the southern US making it suitable for younger audiences to introduce them to the subject. Of course there are many more (and incredible) adult novels about the slavery experience and the various escape routes north to Canada, but this is an important contribution to children's literature. The horrors endured by Julilly and her friends is not shied away from, but also not too graphic for younger readers to cope with. Her journey, being sold from one plantation in Virginia to another in Mississippi, separated from her mother and realising that not all plantations were created equal and her situation in Mississippi being much worse, her escape along with another girl, Liza her friend, and Adam and Lester, is well narrated. Help was forthcoming from unexpected quarters, but this is also a tale of endurance and the bond of friendship. Some historical characters who were instrumental in the underground railroad are included.
My main criticism would be the happy reunion ending that pushes credibility beyond the limits, although younger readers will find this soothing.

Back in the 1980s when I first read this book I adored it. I still think it a fantastic book in many ways, but it's portrayal of Canada as the land of freedom should be tempered with more modern takes. Do read reviews by Black authors, and as usual, I'd recommend looking for books *by* Black authors. Julius Lester was the person I read when I was young and even then, you can see the differences in the much tougher portrayals.

I love to read

This book was okay... 3 stars. Very unrealistic, though.