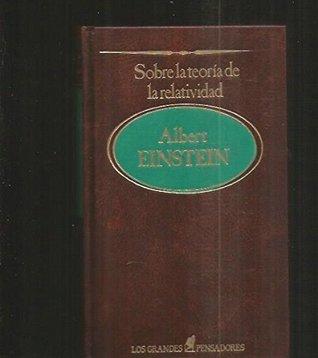 Albert Einstein (1879-1955) in this book introduces to the general reader his theory of relativity: the special and the general theory.

We see that special relativity, which has emerged from the Maxwell-Lorentz theory of electromagnetic phenomena, shows that the laws of science appear to be the same for all moving observers regardless of their speed, all in the absence of gravity.

On the other hand, in general relativity, which can be considered Einstein's theory of gravity, we understand that the laws of science ought to be the same for every observer no matter how they are moving. In general relativity gravitation is a result of the curvature of the four-dimensional space-time continuum. Einstein refers us to Hermann Minkowski's (1864-1909) four-dimensional "world" and states how important Minkowski’s (one of Einstein’s teachers) idea was for the development of his theory of relativity.

So, what did these moving and stationary observers notice? Their pocket watches that were perfectly synchronized at first recorded a different time after their observation was complete. Some dials were ahead, and others behind. So, time is relative, not absolute.

The book does not concentrate only on science, but is also a tiny bit philosophical. The writing is simple, straightforward, and easy to understand, although at first, the theory is somewhat complex, but at the end of the day easier to understand than visualize. It's difficult to visualize three dimensions, let alone four. Einstein's intention in writing this book is to present the special and general theory of relativity to the broader public with simplified examples and equations.

Einstein gives a lot of recognition to his predecessors, such as Euclid, Newton, Galilei, and Gauss, and does not overthrow or disregard their science theories and laws, but rather upgrades them. I am astonished at Einstein's capability on how he utilizes the available mathematical equations which he modifies and adapts so well to suit his revolutionary theory.

We also notice that in general relativity no point of view is more important or preferred over any other point of view. I wonder if we can extend this conclusion to other subjects. Are all perceptions, coming from different angles, of equivalent importance? This is something to keep in mind while considering other people’s points of view.

My five star rating is for the quality, accuracy, and importance of the theory.

I hope that no one will ask me what was this book about .

This is the copy that I wanted. In his own words, he describes conceptually the theory of special and general relativity. He uses very clever and easy to understand theoretical and real situations to guide your understanding towards an omega point. I bought this book at special price from here:
https://www.amazon.com/Relativity-Spe...

Some years ago in France a book by Jean-François Gautier appeared, entitled Does the universe exist?.

What if the universe were a concept like cosmic ether, or phlogiston, or the conspiracy of the Elders of Zion?

The idea of the universe, as the totality of the cosmos, is one that comes from the most ancient cosmographies, cosmologies, and cosmogonies. But can one describe, as if seeing it from above, something within which we are contained, of which we are part, and from which we cannot exit? Can there be a descriptive geometry of the universe when there is no space outside it on which to project it? Can we talk about the beginning of the universe, when a temporal notion such as “beginning” must refer to the parameter of a clock, while the universe must be the clock of itself and cannot be referred to anything that is external to it?

Can we say, as Eddington does, that a hundred billion stars constitute a galaxy and a hundred billion galaxies constitute the universe, when, as Gautier observes, while a galaxy is an observable object, the universe is not, and therefore we would be establishing an improper analogy between two incommensurable objects? Can we postulate the universe and then study with empirical instruments this postulate as if it were an object? Can a singular object exist (surely the most singular of all) that has as its characteristic that of being only a law?

And what if the story of the big bang were a tale as fantastic as the gnostic account that insisted the universe was generated by the lapsus of a clumsy demiurge?

After all, the cultivated person’s first duty is to be always prepared to rewrite the encyclopedia.

P.S. The reflections are directly borrowed from Umberto Eco's lectures, but are genuine concerns of this reviewer too. Questions are addressed to Einstein, of course.

Preface
Note to the Fifteenth Edition

edit: i wrote the 4-star review below before reading the fifth appendix. i mean, who could imagine that an appendix could change anything? well, this one did. all the chapters in the body of the book are 2 or 3 pages. Appendix V is a 20-page essay, written 36 years after the rest of the book and just 3 years before einstein died. it is a tour de force on the history, philosophy, and psychology (i kid you not) of the scientific understanding of empty space. it was shocking, thrilling, amazing. the book now gets 5 stars.

careful, i think some editions don't have Appendix V.

original "4-star" review:
the subtitle of this slim book is "a clear explanation that anyone can understand", but unfortunately i'm afraid that's far from true. there's not too much math in the book, but there is enough that "anyone" really needs to be replaced with "any egghead".

but if you are already familiar with relativity, this is a great book, with lots of deep philosophical underpinnings as expounded my the man himself. i found his writing style to be exquisite - not too dry, not too colloquial.

the treatment of special relativity is wonderful.

but trying to teach general relativity in 45 pages with no math is just too tall an order. he even warns us as things start to get rough:

"...I am guilty of a certain slovenliness of treatment, which as we know from the special theory of relativity, is far from being unimportant and pardonable. It is now high time that we remedy this defect; but I would mention at the outset, that this matter lays no small claims on the patience and on the power of abstraction of the reader."

indeed, the treatment of GR is in very broad strokes, with rather obscure connections. still, quite enjoyable to find this readable text by one of my great heroes.

The aim of this book is to introduce people without a strong physics (or even scientific) background to the special and general theories of relativity - theories that Einstein was the primary developer of. Einstein assumes the reader has passes a "university matriculation exam." What that meant in the first half of the 20th Century, I don't know but in practice what's required is the level of algebra I had by age 16 plus a smattering of mentions of the square root of minus 1. I also found basic calculus useful for one section, though it is possible to do without it.

For the most part this book is excellent, introducing the minimal amount of mathematics and formal language necessary to understand the most important and fundamental concepts of Einstein's theories in a way that is accessible whilst concise. It might be possible to do it better with a bigger book, a less formal style and a lot more diagrams but it very interesting to get Einstein's unique perspective as originator of the theories and insight into his thought processes.

A few sections are remarkable in contrast with the rest, for being unclear. The section on addition of velocities in special relativity leaves rather more to the reader than anything else in the book, mathematically, and when I looked it up it turned out to be much easier to work out using basic calculus than algebraic division - and the bit that wasn't clear was that a division of two equations was what was required. This section could be skipped without losing much.

The remainder of the muddy sections come at the back end of the section on general relativity. The simplest precise mathematical formulation of this theory is expressed using tensors - and tensor algebra is way beyond what anybody encounters in standard school maths or physics curricula. Einstein makes no attempt to explain it and in fact never shows the fundamental equation of general relativity. This makes it very hard for him to explain how gravitational fields and space-time interact, which leads to the lack of clarity in the latter stages of this part of the book. Things get easier and clearer again when he moves on to relativity and cosmology.

The final part of the book is a collection of appendices expanding on things discussed earlier on. I required pen and paper to check the derivation of the Lorentz Transformations from first principles - but this section could just be skipped if the maths bothers you - it doesn't add a lot but it is interesting to see it, if your algebra is up to it.

The most rewarding thing for me, since nothing here is completely new to me, was listening to Einstein's voice. He seemed to come at things from a viewpoint much more generally philosophical than most present day physicists would, discussing Kant, Descartes and Hume, for instance. The section on the concept of "empty space" was fascinating - he concludes that general relativity precludes this notion - one cannot have space-time without it containing "fields." What he means is fields of force - the electromagnetic field, gravitational field etc. This implies the notion of a field being present even if its magnitude is zero - which is a bizarre concept. Modern quantum mechanics backs these ideas to the hilt and leads me to think that one of the most important areas of inquiry for fundamental physics as it stands is the connection between the classical idea of space-time and the quantum idea of the vacuum. The fundamental nature of both is obscure - and in some sense they should be the same thing.

Overall this is an excellent introduction to special relativity and at least the conceptual underpinnings of general relativity, if not of the full theory, which really just can't be explained properly without knowledge of tensors.

The theory of relativity is amazing and important, but contrary to what the tagline says, Einstein himself is probably not the best person to have explain it to you. I read this class for Freshman Studies in college, and I honestly have to admit that I wouldn't have gotten much of it without the significant aid of in-depth lectures and classroom discussions. This is not because the ideas themselves are too complex, but because Einstein fails in his attempt to make his ideas understood to a layman. I don't know what book you ought to read instead, but there are certainly many alternatives, of which some must be good. Einstein does not assume any knowledge of physics, but he does kind of glide over what his variables mean or where they come from, and this makes it hard to grasp what the math means and how it fits in.

This book by Dr. Einstein is very well written, though you will find the anatomy of sentences a little unusual. Well this should not be a problem considering the theory's difficulty level. Though the theory is very simple mathematically (special theory of relativity I'm talking about), but the case is reverse when it comes to understand it intuitively. It defies the common sense. And that's what the book is about. It changes your outlook, the way you see the nature and gives you a new and better understanding.