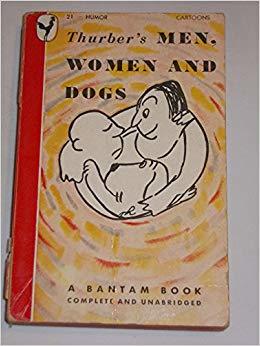 Thurber's men women and dogs : a book of drawings

Complete and unabridged.Preface by Dorothy Parker.

The fact that this 1946 Bantam book is falling apart as I read and laugh at the cracked pages on a dark, rainy Sunday when all the world’s news makes me sick and my dog doesn’t want to walk, let alone poop, on New York City’s dismal wet streets seems somehow fitting.With a dedication to Andy White for instigating the publication of these iconic American cartoons, a reverential preface by Dorothy Parker, and Thurber’s essential humor and pathos, what’s not to like?

Before starting: I need something light, and I love memoirs, so this should be perfect.

And it was! A very short memoir that says it all. Some writers don't have to talk and talk and talk, just a few short episodes, all humorous, tell about the essential elements of James Thurber's boyhood growing up in Columbus, Ohio - the flatlands. Even though the chapters could be seen as short stories, they are not! They are true episodes in this humorist's life. The book was written in the 30s and it has lost none of its charm and humor. That is what I call a classic.So many classic's are dated in their writting style. This isn't. What is covered: his relationship with his mother, from whom he got at least part of his biting humor, eccentric relatives, dogs, of course dogs, school and military training, ghosts, burglars, the day the dam broke and yet didn't and of course his difficulties with his fading vision. So few words, but they say it all and they say it with humor.

I remember having to read "The Dog That Bit People" in class during my sophomore year of high school. Twenty five bowed heads in a room, each making no sound (save the occasional sigh), and one nerd giggling his bespectacled head off, which was me

These stories are absolutely superb. "The Night the Ghost Got In" and "The Dog That Bit People" are wonderful, and the episode in "More Alarms At Night" where his dad "threatened to get Buck" is laugh-out-loud hilarious. I love the characters, as well. Thurber's grandfather, a Civil War veteran, steals the book, and the Get-Ready Man is one of my favorites.

I don't know what else to say about this book, except that I love it.

I find the disparaging comments from twenty-somethings about Thurber's "My Life and Hard Times" amusing. So would Thurber, because he could always use another philistine foil for his smart protagonist. If you find this material to be too dated you should get off Facebook long enough to have real interactions with real people, then you'd appreciate Thurber's wickedly understated and subtle wit. If you don't get it, it's not because the material isn't funny. It's because you don't get it. Get it?

probably the funniest (in a wryly funny, self-depricating, midwestern sort of way) thing ever written in the english language, and the cartoon illustrations are even better.

I read this book for the first time shortly after moving to the Midwest. I moved here from Boston when I was ten, and a year or two later, I was flipping through my anthology textbook for my Literature class and found a short story written by James Thurber. It was absolutely hilarious, so I went to the library and checked to see if he had written any actual books. This popped right up so I borrowed it and took it home to read.

This short 'autobiography' is dry, witty, self-deprecating and interesting, but for me, it was a lesson in how to be Midwestern. I became much more firm in my Midwesternity after reading this. It's an odd thing to say, and I realize this, but you really do have to read this book to understand what I mean, and once you do, you will. You really, really will. This book oozes Midwestern values and perspectives. It's absolutely undeniable.

I'd recommend it to anyone looking for something light and fun, but still serious in a self-deprecating, exasperated way. It'd make a great airplane read; you'd probably be able to finish it on a flight from DC to Chicago. You won't learn any axioms about the universe, you won't feel emotionally purged, and you probably won't be on the floor laughing, but you'll take something else away from it, I'm sure. I think it has to be different for everyone. After all, this is just a man telling stories about his family, which is what makes this book so pleasant, irritating, and fun to read.

Do not read this book if you share a bed with someone and they are asleep.

3.5 stars for three hilarious stories in the collection - "The night the bed fell", "The night the ghost got in" and "More alarms at night" - rest is a bit dated for my taste. Yeh, its a bit hard to comment on a collection thats considered a classic by now but I found rest of the stories a bit dry.

Sadly, this wonderful book is hardly ever referred to. While the world knows that Charles Dickens, Ernest Hemingway, and the Bronte sisters wrote Literature, hardly anyone who hasn't read Thurber recognizes the name. And he's got to be very near the best humor writer out there. I can drive my family crazy by giggling out loud while I'm reading him. They complain, and ask me to stop, but I just can't. I am incapable of reading this collection (his best, in my opinion) out loud, because I burst out laughing at inopportune moments. Bill Bryson has nothing on James Thurber. P. G. Wodehouse has nothing on Thurber. And this collection in particular, containing, as it does, such classics as "The Night the Bed Fell" and "The Day the Dam Broke," is just spectacular. It's clear, concise writing at its best, and is responsible for haunting me with the story of his grandfather, horse-breaker extraordinaire, trying to break the car to his will, and escaping with it to the park one day, where they came across him, driving it in tight circles and trying to bend it to his will.

A humourous book, but only mildly so. I expected much more from the author of The Secret Life of Walter Mitty. However, these quirky reminiscences are enjoyable, if only for Thurber's inimitable style.

Aristotle said: "The world is a tragedy to those who feel, and a comedy to those who think." Seeing the past through the wrong side of the telescope, Thurber is is able to invest apparently distressing events with the patina of humour which brings out his delightfully eccentric family (including himself) into focus. Read it, and remember similar "hard times" from your childhood...