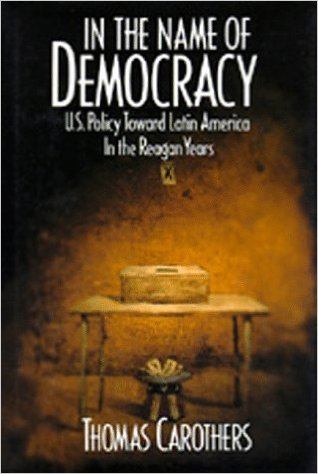 In the Name of Democracy: U.S. Policy Toward Latin America in the Reagan Years

This book appeared at the tail end of the cold war, its theme the "democracy promotion" aims of the Reagan '80s in Latin America. While seemingly a matter of history and of narrow regional focus, I found the theme immediately relevant to the "democratization" process the US undertook globally - virtually as soon as Carothers' book left the press. His main contention is that the United States has a self-serving view of democracy, reflecting its own history and traditions; and its geo-political interests of the moment. Instead, Latin America needs democracy that actually empowers local populations, not a legislature of career lawyers serving as public retainers for wealthy backers.

In outlining North/Central/South American strategy from Washington, Carothers - a legal adviser at the Council on Foreign Relations - outlines the mixed successes and failures throughout the lower half of the hemisphere. The Reagan regime was divided - sometimes sharply so - between militant anti-Communist hardliners who adopted democracy themes as a fig leaf for military action, who could speak of "fledgling democracies" in countries where death squads filled body dumps. And on the other side, with moderate-cum-"liberals" who insisted that the reality should at least approach the rhetoric; that the unwashed masses should be given something tangible to keep them from turning to leftists, nationalists, Castroites, and other anti-US alternatives. Both failed to appreciate that in the skewered economic and political order of Latin America, democracy is itself revolutionary and hard to square with business as usual.

The same theme echoes today in the new cold war in the Middle East, of democracy promotion vs. militant Islam; or in "humanitarian interventions" in the Balkans. Yet in the Reagan years the Vietnam legacy was still strong: with the exception of tiny Grenada, Reagan wanted no US boots on Latin American soil. The charge of "Yankee imperialism" was still a sensitive one at home, and no more so abroad than in Latin America with its history of Marine occupations. It was only after Reagan, and the unraveling of the other power bloc, that North American hands were unbound to undertake more aggressive actions; first with Panama, then the former Yugoslavia, then Iraq and beyond, with NATO expansion flowing into the very heart of its 1980s adversary.

But Carothers' warnings of US attitudes remain more valid than even at his time of writing. The US still equates democracy with "free elections" in the most technical sense, not with any content in the choices offered the voting public, or who even constitutes this roster, except in ensuring the "good guys" win. In this sense the US promoted democracy in Sandinista Nicaragua, and here I'll disagree with Carothers: US efforts did effect the outcome. The opposition UNO was heavily funded by the National Endowment for Democracy and its affiliates, and these sources were not blocked and hamstrung as Carothers suggests. And no matter how discredited the contras in Congress, they remained a viable destabilizing force at home. UNO's candidates were not subtle in their hints of further war if the elections did not go their way; thus a vote for UNO became a practical vote for peace, surprising the Sandinistas who thought their local peace accords had sowed it up for them. With Nicaragua as precedent the US has since launched "color-coded" democratization movements whose goal is not just promoting the forms of democracy, but open regime change against "unfriendly" governments, sanctified by a gamed but technically "free" electoral process, with the biggest warchest winning - just like back home.

The recent results of the United States' latest national elections should warn us that democracy promotion - like other virtues - thus begin best at home.

Carothers interviewed a lot of people who worked for the Reagan adminstration and uses his research to give a country-by-country account of the administration's policies. He especially traces the theme of the promotion of democracy and charts the competition between hard-line anti-communists and moderates in the policymaking process.

He finds that the moderates gained influence as time went on. They usually paid more attention to advocating democracy, except in Nicaragua where the hard-liners adopted it as a tactic to undermine and, they hoped, destroy the Marxist-influenced Sandinista regime there. He believes that democracy rhetoric was generally genuine but also shallow and not particularly effective.

I would recommend it for those who are interested in the topic. I read it for a research paper on Reagan's Latin America policy.

Excellent summary of what Bolaño called the Vietnam that was Central America.

From chapter 3: "By far the most important effect of the Reagan policy was the tremendous destruction it wreaked on Nicaragua..... Approximately 30,000 Nicaraguans were killed and tens of thousands others were wounded, a death toll higher in per capita terms than those suffered by the United States in the Civil War, World War One, World War Two, the Korean War, and the Vietnam War combined. A generation of young Nicaraguans was devastated."