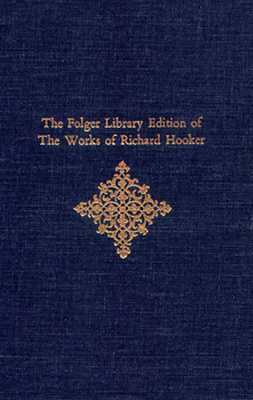 An absolutely fascinating volume, this represents the last writings of Hooker's life, when he was called upon to respond to a sweeping attack on the Lawes, published as "A Christian Letter [. . .]," which shrewdly sidestepped the almost irrefutable meat of Hooker's argument (on adiaphora, the nature of law, the flexibility of ecclesiastical ordinances, etc.) and opted to attempt to discredit him by arguing that on fundamental premises of theology (Christology, sacraments, predestination, the authority of Scripture) he had departed from the confessional standards of the English Church, and from Reformed orthodoxy. Many of the charges were so strained as to be laughable (e.g., that he was an Arian), but others touched on very crucial issues in Hooker's theology (e.g., how he handled predestination), prompting Hooker to start working on a thorough, carefully-reasoned response, which unfortunately remained mostly incomplete at his early death.

In this volume, then, we have (in addition to a fine introduction), three sections: first, A Christian Letter, with Hooker's delightfully impatient and frequently scornful marginal notes interjected throughout--his first impressions, apparently, as he read through the text; second, a rough outline that he penned of how he was going to construct his response on the issue of predestination; and third, the essentially coherent and even polished, but fragmentary "Dublin Fragments," containing his most thorough statement on the most vexed issue of the day, predestination. For anyone struggling to make sense of that doctrine, to articulate their vaguely-felt concerns with strict TULIP Calvinism, to find an acceptable, cogent, and biblical middle way, READ THIS TEXT. Here you will find evidence of a truly gifted theological mind at work, and one enormously erudite, richly steeped in the traditions of the Church and desirous of following them as much as possible. And the Dublin Fragments are only about 75 pages long.

I confess that I had to read through them in some haste, only slowing down to carefully study certain key parts of the argument. This text certainly merits extremely careful attention and study, but unfortunately, predestination is scarcely, if at all, relevant to my thesis work, and I haven't the leisure for such careful attention right now.