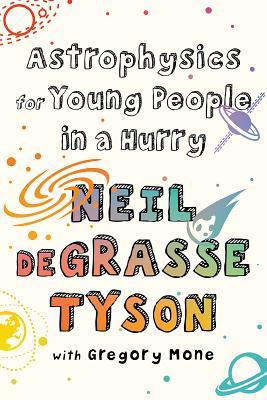 Astrophysics for Young People in a Hurry

This adaptation by Gregory Mone includes full-color photos, infographics, and extra explanations to make even the trickiest concepts accessible. Building on the wonder inspired by outer space, Astrophysics for Young People in a Hurry introduces an exciting field and the principles of scientific inquiry to young readers.

Last summer I filled my bookshelf with all of this mature and educational reading material, thinking I would be a grown-up and spend my summer expanding my mind and NOT solely reading smut. Astrophysics for People in a Hurry was one of those reads I attempted to help me in my goal. Let me tell you -- most of the book was way, WAY beyond my ability to comprehend. I do find the topics fascinating though. So imagine my surprise when I saw this title out there (*eARC Netgalley). If it's wrote for young people, then myself as a 35-year old adult should definitely be able to "get it", right?!?! No. Nope. Nein. Not happening. I understood a lot more of this one though compared to "for People in a Hurry", so I'm getting somewhere folks. It's still a hard concept to grasp, though I had fun trying! Maybe if Mr. Tyson could make his next title "Astrophysics for Kindergartners in a Hurry" ??

I read this book for two reasons 1) I bought it for my 4th-grader and wanted to know what was in it and 2) I wasn’t sure I could handle the adult version. Having listened to several lectures by Tyson I could definitely sense his voice coming through as I read the words on the page. Several funny, kid-appealing asides pepper the book with goodness. I like the encouragement Tyson gives our young scientists to explore, and be amazed by, our world.

Let's say the lockdown challenged me to revise everything I learned at school. This was fun, in part because I didn't remember much about astrophysics and because back then my teacher was not explaining this good. Now I want a book like this about physics.

Summary: OMG. This guy is so awesome. Instead of being super serious, he just lets his love for the subject come out. I mean, if you're going to teach/preach/get people involved in a field that needs more participation, this is how you do it.

Video review at: WhereIsMayLing on IGTV as a part of Black History Month. Would love the support by following Insta.

NDT is the bestestestest of everyone I've read in science b/c he knows it so well, he can just say it with joy and love. Too many people in these fields take themselves way to seriously, but all the people I've met that are totally brilliant are more like this tone. Fun, joy, just say it. So great.

Stuff he explains so well and clear:
1) Dark Matter
2) Dark Energy
You need to really get these things better if you are going to be a true Star Trek Fan. So I am thankful for that.

p. 26 - I did not know that photons were electrons plus protons. It's photons that travel across the universe and that our machines detect to understand the expansion of the universe (light).

p. 31 - He uses this idea and then gets philosophical in a cool way. Like science can figure out the beginning of the universe, but before that, it's tough. Then he goes on and is like: "scientists have to admit what we don't know all the time. People who believe they know everything have neither looked for, nor stumbled upon, the boundary between what is known and what is unknown in the universe." Deep.

p. 89 - Regarding the 100 Authors against Einstein, Einstein "When he learned of the book, he responded that if he were wrong, then only one author would have been enough."

p. 127 - I did not know much about the Five Hundred Meter Aperture Spherical Radio Telescope (FAST) and that it's China's way of getting the first call from space. Dig it. "If aliens ever give us a call, the Chinese will be the first to know."

p. 136 - This whole discussion on the Kuiper Belt and Oort Cloud. Wow. so beautiful.

p. 141 - You cannot see the great wall of china from space, b/c it is too narrow. did not really know that or that all the lights in NYC and Paris also not bright enough to see from space.

p. 148 This whole sexism with the Nobel committee is f***. Jocelyn Bell story. Also with the dark matter discovery. What's up with that? Also Vera Rubin (p 78)

p. 157 onward, he talks about the Cosmic Perspective and various implications. It's just given as a series of facts/ideas. But I think it's pretty deep, esp since his audience is for young people. Things like, The cosmic perspective is spiritual but not religious. The Cosmic perspective requries you see the possibility of a multiverse and whatever that implies for your reality. I think if you're a fiction writer, this whole section is bawler for opening up the mind.

I'm a total fan of this dude.

I realized semi-recently that books designed for kids sometimes teach scientific concepts more accessibly than books designed for adults. I tried reading the version of this book for adults but struggled to make sense of any of it, so I was relieved when I came across this adaptation. There were still some things in this version that I had trouble wrapping my head around, but I had a bunch of "aha moments" too. It's a really good feeling when an idea finally clicks for me, and I found myself beaming with excitement (at both the new understanding and at the concepts themselves) pretty often. Space is another thing I've loved and been curious about all my life, and I'm happy to have made some progress in understanding it.

Easy to understand and yet as complex as the universe.

Really enjoyed this one; very interesting. I loved listening to LeVar Burton read it.

⭐️? We are all made of stardust! ??Um...for young people? How about adults too? Some of the concepts still went over my head.

I really enjoyed this one.
I think it's perfect for someone who wants to know about the most important things in the universe, but not in detail. Just the rough things.
You can understand it quite well and I didn't have any problems, even though English isn't my first language. This book is made for middle graders and it shows, but that was actually a good thing, because I think this was probably the main reason it was easy to understand.
Furthermore, this book is really funny and witty. That is of course because of the age group it's trying to appeal to. But that made it easy to follow and not hard to read. Often times, anything science related or just non-fiction books are a bit dry and hard to stay focused on. This wasn't the case here at all.

So, to everyone who is a bit interested in Astrophysics, but doesn't want it to have too much details, just the overall information, this is for you.

Review of the Audiobook read by LeVar Burton

"The Universe is under no obligation to make sense to you"

I've never been interested in astrophysics, and I'm still not interested... yet, this was AMAZING. The whole writing and explanation is very simple, with easy words and real life examples.

It has some jokes in between the physical theories and they are actually very funny.

Burton's performance was fantastic too. One of the best narrators I've listened to.

"But maybe on the cosmic scale we are not that smart"

I'm still not interested in this topics, but I'm pretty sure this book is going to mean the world to many kids.