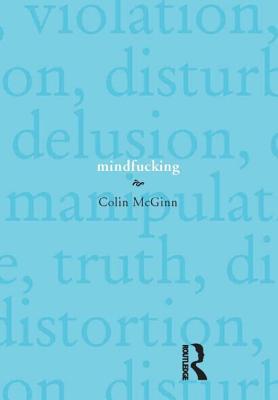 Mindfucking: A Critique of Mental Manipulation

In Mindfucking Colin McGinn investigates and clarifies this phenomenon. Taking in the ancient Greeks, Shakespeare and modern techniques of thought control, McGinn assembles the conceptual components of this most complex of concepts - trust, deception, emotion, manipulation, false belief, vulnerability - and explores its very nature. He elucidates the sexual implications of the metaphor of mindfucking, stressing both its positive and negative features and exposes its essence of psychological upheaval and disorientation. Delusion is the general result, sometimes insanity. How mindfucked are you? It's hard to say from the inside, but being aware of the phenomenon offers at least some protection.

Great little philosophical book and fun to have on the shelf for shock value. Don't let the title fool you, the book is written by Colin McGinn, an actual philosopher. He touches on many different institutions that use manipulation (mindf---ing) to keep our attention. He also brings up something that I hadn't thought of before regarding manipulation; people get addicted to the thoughts that were put in their minds, perhaps at a young age, which makes it more difficult for them to think in any other way.

Entertaining. Neither mindblowing nor mindf*ucking.

I saw this very short book in a bookstore and had to stop and read it. It was actually a far more interesting piece than I thought it would be (as reflects my rating).

Mcginn's entry into the discourse of linguistics with respect to human interaction, or more interestingly power interactions is somewhat unique. He articulates the differences of what he means by MindFucking vs. other forms of deception both external and internal. Rationalization and the ability of the mind to construct deceptions are matters which plague philosophical discourse and the search for truth.

In many other previous pieces, one finds a view of deceptive speak or elloquent speak as something which is violating; in such a way that the essence of man (whatever you might think that is) should revolt against it. Indeed, Mindfucking addresses the fact that there is something perverse but potentially satisifying in allowing the deception. Indeed, the potential for philosophy and academia to pervert the truth, i.e. the difference between the rational and rationalization and the tendancy of the latter to be a tool used by the brightest to "justify" much of what is negative in society, is not insignficant. To the extent there is pleasure in being deceived, this poses some very interesting problems for much of political philosophy.

In this regard, the last chapter is adorable. Though I'm sure he added it as a cheeky after thought, it is actually rather an important chapter. In presenting the idea of philosophical thought to potentially be arift with it's own biases, its own presausive desires, this chapter reminds the academic reader that "essay" as a form has a certain social utility.

I came across this at random and read it on a whim. According the the author, there is lying, bullshitting, and then there is mindfucking (MF). MF is then explained in detail, though not in the most lively of ways. The author makes a few good points, provides a few examples, though none in recent terms. It seems the author was afraid to offend by making an argument the Fox News MF's their audience, or how specific religions MF the flock, or even the 2008 Obama campaign--this was disappointing. I think what's need is a real example, broken down step by step to demonstrate how the MF works in the wild and how people reacted in turn.

Though the topic is inflammatory, if by nothing else than it's sheer name, the writing is fairly dry until maybe a third of the way in when meme's are discussed; from there, it picks up. The argument is well supported and the book does well to explain it, but I don't think nearly enough to suggest how to fight back and dispel. I would suggest this to read as it is short and interesting, but don't expect his words to leave you MF'd (in the good sense)

I actually thoroughly enjoyed this book.

It's more of a treatise than an actual book, and it is an incredibly quick read. It can be taken as a more modern view of On Bullshit, and owes a lot to the previous book (as it says) but it easily stands on its own as well. If you're looking for an interesting psychological study of manipulation, here it is. If you're looking for something a lot deeper and involved? Well, you'll have to look elsewhere.

A short philosophical essay that shallowly dives into the meaning of mindfucking and mental manipulation. The first half was mostly common sense, defining the word, differentiating it from "bullshitting", and outlining the difference between negative mindfucking ("the illegitimate exercise of power") and welcomed mindfucking (falling in love and movies with shocking endings like The Sixth Sense).

This mostly focused on the negative application where someone intends harm. McGinn provides a few examples of where it's used in politics, the military, religion, and even Shakespeare's characters to one another, but I wish he went into more detail. It was a surface explanation that didn't dissect any specific examples in history, but just that it happens.

Although, the "Extending the concept" chapter was more intriguing. It explains how we can mindfuck ourselves through our dreams, and the effect of a chemical imbalance in your brain on things like mental illness or from drugs like LSD. I was also engaged by McGinn's discussion of how "the most mindfucked societies on the planet are, not accidentally, those with the weakest independent media." Especially during this moment of 2020 where there's so much happening in the US and the world, it's proving difficult to parse through it all to find the truth when the media seems to mindfuck us all and shows us only what they want us to see.

This is a super quick read, and although you won't get anything surprising from it, there were a few sections that made it worthwhile.

I picked up this book because of the unusual title. I had no idea what I would find in there, until I started reading it. The first few pages turned out to be philosophical - the analytical kind.
The book is simple, easily readable, informative primer on mindfucking.
What I learnt? Mindfucking is a concept which is applicable in our daily lives - it is closer to home than we think. People who are easy to manipulate are already disposed to it. Closed informational systems are prone to Mindfucking. Romantic love is sort of a mindfuck. Drugs mindfuck. Words mindfuck. These are some of the themes explored in this tiny book.

How to deal with Mindfucking? This is not explicitly stated in the book but as a reader who has been equipped (after reading the book) with what constitutes of Mindfucking and how to identify it, I can figure that out for myself.

No, I wasn't mindfucked (in a good way) by the book but enlightened as the author claims in the concluding chapter.

Yes, I would recommend it to friends and family.

It's a philosophical essay on mindf**king describing its geometry structure.The writer is trying to explain also why mindf**king is different from bulshitting and lying.What Who Why and How are the main questions raised to explain this term.For as the author tells it seems that romantic love is also a species of mindf**k.Fellatio is also a kind of head fucking because to f**k with someone's head also means to cause this action on it.