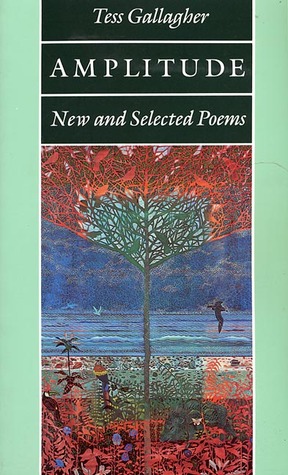 So this kind of poetry really isn’t for me. It’s hard to unassociate with Carver. Sad things and unspoken violence with words and themes repeating themselves in a forest by the river. There’s an emptiness to all of it, which I found unpleasant. Really enjoyed her later work, it felt less isolated.

This is my second reading of Amplitude, and it cemented my impression that Tess Gallagher is one of the best American poets in a long time. The ghost of Raymond Carver lingers in many of the poems, but it strikes me as authentic. It would be artificial for her to try to edit him out of all the experiences and sensibilities that drive her poems. Gallagher has a keen ear, a wonderful sense of narrative, and a deep appreciation for people and their interaction with their environment. I particularly like the way she works her line breaks and punctuation, as in "Zero":
stupid tranquility, to be most sure/ in the abstract, the zebra/ raising its head from the river, the clock/ wound to the usual multitude, the junco bird/ appearing as a miracle on the blind magician's/ balcony. A thing among things,/ the magician is there as an absolute, his/ long sleeves, an attitude of sight/ that amounts to seeing, the morning steady/

I went to a reading of Tess Gallagher and Raymond Carver in the late 1970's, and then I studied a book of hers during a poetry course. She was a poet that influenced me. I had not read her for a number of years except when I came across a poem of hers. This book has some wonderful narrative and experiential poems, poems that cause one to think about people and the kinds of caring in relationships. Her writing is original, and so it is startling or illuminating. I read this book very slowly, in fact it was one to take with me when I might need something short to read.

Reincarnating the life of her husband, widow Tess Gallagher reminisces the beauty of nature and language to represent the past and the idea of mortality. Her playful use of light imagery throughout her poems create an effect that has readers gravitate toward her writing, seeking more. Her work, Amplitude: New and Selected Poems focuses on this light imagery, diving further and further into Gallagher’s emotions, bringing her past to life. Throughout this collection of her poems, readers are inclined to feel the presence of her late husband’s ghost, Raymond Carver, as he lingers in most of her poems. Gallagher also refers to her relationship with family, friends, as well as women’s role in society in her poems which often develops a deeper connection with her audience due to her pure vulnerability.
Due to her infatuation with nature in this contrast of dark and light imagery, the definition of amplitude serves an astrological meaning as readers see from the first poem in her collection, “Under the Starts” which takes a closer look at the relationship between the author and her mother when she was a child. As most children fear the dark, the poem refers to the solace that Gallagher feels from her mother when guided by starlight. Gallagher uses alliteration and imagery to bring her emotions to life, painting a vivid image for her readers as she says, “we stare out together, but she sees past/their fierce shimmering sameness, each/point of light the emblem/of some lost, remembered face.” Here, readers are aware of the consolation that the starlight gives the author due to her use of alliteration. It also reveals another theme in her poems: the theme of mortality. When Gallagher says, “the emblem of some lost, remembered face”, she is referring to the millions of people that have lived before her, and that in the afterlife, they resemble the stars and overlook from the heavens. This creates yet another contrast between dark and light imagery that Gallagher utilizes in her poetry in order to reiterate the significance of mortality, not just in her poems, but its association with humanity. Starlight is just one example that Gallagher uses in her poetry. She also captures the essence of fire and daylight which creates an open relationship with the author and her audience being that she is becoming emotionally vulnerability and revealing her grievances with the audience. Not to say that a lot of her writing does endorse her grief about her late husband, but rather it incorporates a luminosity that keeps the tones light and with that, the readers hopeful.
Fire is considered one of the darker tones and themes in her poetry. As fire represents passion, desire, and romance, it can also represent destruction. Gallagher uses fire to incorporate a more sexualized theme with again vivid images as well as the use of symbols and figurative language in order to reveal women’s role in society. Gallagher reveals this role of women after taking part in a sexual act with a fireman. She says, “But what they look like after fighting a fire, well they lose all respect…” which relates back to how women are viewed if they engage in sexual intercourse. For some instances, it is frowned upon for women to participate in a one night stand, however, for men, it is almost encouraged. It was an interesting take on Gallagher’s part to use fire as a way to exhibit this light, romantic, and passionate interaction with a fireman, which ultimately turned into loss and destruction in the end. Again, Gallagher focuses highly on this contrast between light imagery and dark imagery. For this poem in particular, it was intriguing that Gallagher used the opposite effect by taking a light instance and making it dark. Some of her poems create an eerie tone that mystify readers and have them second guess their meaning in life, while other poems Gallagher keeps charming and hopeful, so that in dark times, readers can look toward the light. Ever since the loss of her husband, Gallagher has become one of the best American poets through sharing her vulnerability and her compassion about her thoughts on mortality, its relationship to nature, and women’s place in the world to enhance the reader’s experience by creating a sincere relationship in hopes to inspire the reader, giving them courage in times of darkness and expanding their views on the world. Gallagher desires to indulge readers with a different perception of the world and experiences through her vivid images, use of figurative language, and her voice throughout her poems. Gallagher’s work has inspired writers like myself to take more notice of the world around me and by sharing my experiences, becoming more vulnerable to the world without fear of rejection, I will become a stronger and more in-depth writer.

Once again having picked up a book from my late mother’s poetry collection I came across a gem of a poet. The down to earth subject matter, the respect and love for family, the experiences of a traveler were all wrapped up in this volume. One of several that I dog-eared for future re-reading was named “Rijl” about a young woman who was named after a star. As a star gazer, I felt connected to Gallagher’s poems with references to stars and constellations. Also, her portrait of working men and women in poetic terms moved me, as I always consider the heroic in the “ordinary” (which is seldom actually ordinary and much more often heroic than many tend to think of it).

Many of the pages of this volume are bent forward and I will read them again one day I hope. We will see what tomorrow brings.