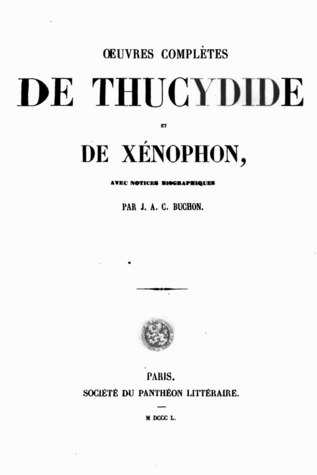 What I love about the best ancient Greek literature is how startlingly modern it could be. This is particularly true of Euripides (whom I regard as a 21st century dramatist) and The History of the Peloponnesian War by Thucydides. The accounts of the Corcycran revolution, the so-called Melian Dialogue (in which Athens shows itself to be somewhat less enlightened than reputed), and the utter disaster of the Sicilian Expedition can just as easily be taking place now in remote parts of the world.

The Peloponnesian War even had its own Neocon in Alcibiades. He was largely responsible for Athens undertaking the Sicilian Expedition, only to be called back by the Athenian leadership for sacrilege. Thereupon, he made his escape at Thurii, went over to the Spartans, where he gave them excellent advice in combating the Athenians. Then, when the Spartans began to suspect him, he went over to Tissaphernes, the Persian Governor of Asia Minor. (Later still, he returned to Athens.)

I recommend the Rex Warner translation but urge readers to have a copy of The Landmark Thucydides at hand for its numerous and excellent maps, if not for its somewhat archaic translation by Richard Crawley.

"Oh God, Not the Peloponnesian War Again", lamented an article in Foreign Policy. To be honest, I understand where the author is coming from. Besides the fact that there is so much more of history to learn from and read about, Thucydides has been excerpted and misinterpreted almost to meaninglessness. Sentences, summaries, and single anecdotes from his book have been used as the basis for predictions on great power politics and the fate of China and the United States, like white noise over an actual discussion. I don't need to go over the fine detail about how the United States is different from Athens and China is different from Sparta.

Thucydides does not always help his own case. His prose style is dense and demands close attention; he recites distant place names and generals that can bewilder a casual reader. He is often excerpted, which helps to show the points of his narrative brilliance but also begets the risk of misinterpretation. A student who only reads to the sudden end of the text and then nothing else might overthink about how Sparta overtook Athens - but not know that Thebes would soon prove that Sparta was not invincible, or that Persia loomed over them both, or that Alexander the Great would soon fall upon them all like a lightning bolt or a tornado.

For all that Thucydides was talked about and debated made me realize how much I had forgotten, and so I decided to pick up this edition to reread him and recover some of what I had lost. This edition was better than I had hoped. The text is an older translation, but really there is no effort spared to guide the reader. This massive volume has the text, but a running banner at the top with the year, margins along the side summarizing and dating the events, references to other chapters in the text, eleven appendices on everything from dialects to naval warfare, dozens of maps, and a table in the back comparing events across different theatres of the war. It is an excellent teaching aid, and the rewards of this once inaccessible book are held out for the patient reader to grasp.

Thucydides' telling of the war is filled with battles, rituals, and so many literary speeches. He is a skeptic of Athenian democracy, almost in awe of certain figures like Pericles, and his is a brutish story of power politics, fear, and suspicion. Generals mak1e ruinous mistakes, political leaders talk their way in and out of trouble. There is talk of honor amid cold self-interest. There is stunning cruelty, and it becomes almost routine. It is a small, almost familiar setting - the loss of a few hundred or a thousand is a catastrophe, and the Peloponnesus itself is just smaller than New Jersey. Other people have summarized it better here, so I won't go into the details for the sake of discovering them for yourself. This is an excellent place to do it.

It has been said that Earthling civilization, so far, has created ten thousand wars, but only three intelligent commentaries on war—the commentaries of Thucydides, of Julius Caesar and of Winston Niles Rutherfoord.


Some years ago, I waded through the Barnes & Noble edition of Herodotus’ Histories. It was one of the most painful reading experiences of my life. I blame 95% of this on the translator (G.C. Macaulay), who broke new ground in dry, prolix, knotty prose. The final result was to make Herodotus’ narrative—already full to the brim with digressions and asides—into a tangled mess that gave me a never-ending headache.

However, Donald Lateiner’s introduction to that edition was so good that I was left wanting to read more of him. So when I found out that the B & N edition of Thucydides’ famous history also featured an introduction by that scholar, I picked up a copy. But the memory of the pain wrought by Herodotus still burned. It took a few years before I could bring myself to give Greek history another go. But I’m glad I did.

In many ways, Thucydides is the polar opposite of Herodotus. Whereas the latter is relaxed and easygoing, Thucydides is forceful and dogmatic. Herodotus is more than willing to report an entertaining anecdote, to indulge in an aside, or to report multiple occurrences of the same event. Thucydides, by contrast, is always on topic, never indulgent. From the first few sentences, one is aware that he is cutting down and refining his material with ruthless precision. Every fact that makes it to the page has been culled from an ocean of information; every sentence has been written and re-written dozens of times.

The merits of Thucydides are twofold. The most obvious is that he virtually invented modern history—concentrating on political and military developments, and keeping scrupulously to verifiable facts. The other is his rhetorical prowess. From what I’ve been told, his Greek prose was cutting-edge. There is only the faintest echo of this quality in Crawley’s translation (which I still liked, by the way). Nevertheless, the History is at times as gripping as any good novel. The speeches (however closely they adhered to actual fact) are without exception masterpieces—both of drama and of political analysis. The battles, the intrigues, the plots, the strategies, the movements of men and ships—all come alive in Thucydides’ terse, muscular writing.

The Greeks were truly remarkable. In mathematics, Euclid was the standard textbook for over two millennia; in philosophy, Plato and Aristotle still cast their long shadows over the present-day; in literature, there are few authors whose influence can compare with Homer, Sophocles, or Aristophanes. And now we must add Thucydides to their ranks of geniuses. The man managed to set the stage for an entire field of enquiry, and do so with a book that remains both readable and relevant after over two thousand years. If America suffers the same fate as Athens, I at least hope we leave behind half as many great books

Favorite quote:
"The absence of romance in my history will, I fear, detract somewhat from its interest, but if it is judged worthy by those inquirers who desire an exact knowledge of the past as an aid to the understanding of the future, which in the course of human things must resemble if it does not reflect it, I shall be content.
In fine I have written my work not as an essay with which to win the applause of the moment but as a possession for all time." -Thucydides

If you ever wanted to tackle Thucydides, this is the way to do it. It's beautifully laid out, with helpful maps and other material. The reading experience is profoundly moving, not really for the style but for the sheer weight of human folly on display. This should be required reading for politicians of all stripes.

I first read Thucydides in college, using Rex Warner's translation in the Penguin edition. As a frosh with little background in ancient history and political science, I didn't have the proper perspective to realize Th.'s critical place in western historiography and political thought. As a junior, I re-read Th., this time in a course on ancient historians. At that point, having had modest exposure to Hobbes, Machiavelli, Burke, Clausewitz and the like, I was better equipped to appreciate Th.'s method--particularly his analyses in the vein of what we'd call "realism" today. Last year I tackled Th. again, this time in Strassler's amazing Landmark edition, and I am grateful that it was available for my third go at probably the most difficult classical author I've run into.

I won't go into details on Th. himself--I'm not a historian and anything I say expounding on how great he was, etc. will of course come off as amateurish and pointless. I will go into how much I admire the product of Strassler's labor of love (he's an unaffiliated scholar) in producing the Landmark edition. First of all, the translation is refreshingly readable and doesn't have the relative stuffiness of an early 20th-century Oxbridge rendering (which, er, I actually rather enjoy every now and then :-)). Second, the marginal timelines, the extensive but not suffocating footnotes, and maps (all carefully placed next to the relevant narrative) make it unnecessary for the reader to flip pages and lose the flow of the story. Furthermore, its appendices are a treasure trove of ancillary information: there is background information on the Athenian polis and imperial administration and the corresponding systems on the Peloponnesian side; discussions of the more technical aspects of ancient warfare; and pages on other topics such as the currency, religion and ethnic groups of the Greeks, each written by a specialist.

In summary, I have nothing but good things to say about this edition--I only wish I'd been able to use it as an undergraduate. I also note that Strassler has just come out with a similar edition of Herodotus. Can't wait to check that one out...

If you are going to read Thucydides, the Landmark version is the best place to start. I read this after I became a fan of Strassler's The Landmark Herodotus: The Histories. For me, there is not much better than Thucydides' speeches. "The Funeral Oration of Pericles", "Diodotus to the Athenian Ecclesia", "Demosthenes to his troops at Pylos" & "Nicias before the last sea fight" are all some of the most interesting, moving and inspiring speeches and harangues EVER written.

Thucydides' HOPW (Landmark edition) is filled with enough maps, appendices, marginal notes and summaries that Strassler well-girds the modern student of the Peloponnesian war for the challenge that is Thucydides. Strassler (and his team) has updated and improved the Crawley translation (which is a gem). This book is a must for students of the classics, politics, history and war. Hell, even if you are just interested in a good story, Thucydides tells a good one. This is an amazing and beautiful piece of history.

Probably 4.5 stars due to Thucydides dry narrative but an awesome read. Political stupidity has not changed.