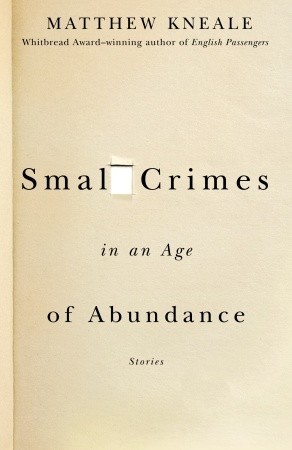 Small Crimes in an Age of Abundance

Looking at the newspaper review of this, I see a variety of interpretations including the obvious one. Nice white people turning life into shit for others, not directly intentionally, but nonetheless doing so.

But it seems to me there is a completely different way of looking at this collection of short stories. They are all about negativity and how that affects behaviour and the course of life. Whilst I’d be the first to distance myself from the delusional ‘think positive’ that has been imposed upon the American population in order to aid the dismantling of their society, at the same time, ‘think negative’ is at least as bad.

The first story sees a nice white family think the worst of the Chinese person hanging out the moment something goes wrong. They think he has stolen from him. Well, he hasn’t, the mother has simply misplaced something. But by then it’s way too late. Chinese person is dead, having been reported to the authorities by the family. If their mindset hadn’t been negative in the first place, none of this would have happened. There is, too, the negativity which sets off the trip in the first place. We don’t go on the right trips….

The last story is about a would-be Palestinian suicide bomber. Only ‘would-be’ because he wimps out, after thinking in a very negative way about what he is doing which leads to a stalled climax. He ends up in the worst place, caught, no doubt with some dreadful punishment to come, and nothing to show for it.

This is such an excellent collection to read while traveling. His characters make decisions based on fear, comfort, self-aggrandizement and ignorance, and it's fascinating to read how things unfold from each unreliable narrator's perspective. Amazing how travel can often bring out the worst in us, even when we think we're doing our best. :-) Kneale is now included in my list of amazing short story writers. I need to get my hands on his other books.

(PS - Thanks, Iris, for lending me this book on the stinky rickety Sapa-Hanoi train!)

Matthew Kneale is a powerful writer with the ability to immediately draw in the reader to the worlds of his characters. The stories he tells are all widely divergent in place but each are meticulously presented with casual intimacy and startling detail. Moral dilemmas,ethical lapses, choice points and long term consequeces are all covered here.
Kneale has a delicious sense of irony and his liquid prose is unflinching. He neither apologizes nor turns away from the absurd and ultimately endearing attempts of his players to reconcile abberent behaviors, shining a light into the wavery depths of human nature.

Some stories are really interesting, such as "Stone", "Powder", "Sound" and "White" (Stone and White being the most powerful ones in my opinion). They show how one small action, as small as an angry look, can change things and have such consequences for you or the people around. MAkes you want to think things through a little bit more, and not judge people too quickly.

Only read the first one or two stories. Don't really feel inspired to read more.

Amazing. New favourite book and author. One of the best collections of short stories I’ve read in a long time.

Having read a lot of short fiction over the years, I was very impressed with this collection. It is on par in terms of storytelling with Andre Dubus and to me that is elite company. These stories are compelling and have wonderfully vivid characters. As good as any collection I've read recently and better than most.

This was a quirky read but fun and easy. Most of the stories were entertaining and interesting...others not so much.

Kneale writes characters that are entirely too true to life, the horribleness the more striking with how mundane and realistic it is. But still, the stories felt flat to me, not emotionally engaging enough to pull me in. Plus, the problem with a collection that focuses on small crimes of everyday people is that after awhile you expect the punchline, deadening what might have been otherwise a satisfying reveal.