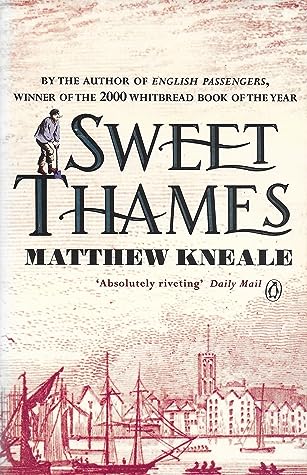 This is my new most favorite author in the world. By accident, I noticed my swelling bookshelves housed TWO books by him (chosen seperately at different times and bookstores). I went on to buy a third book by him. All are completely different and completely wonderful. Though none can top the greatness of his English Passengers, Sweet Thames is still a kick ass book of mid-19th century when the sewer problem of London was reaching epic nasty proportions and the infamous Cholera outbreak was on the verge of erupting. In the center of all this is an ambitous engineer and his own personal dramas. Historical fiction is always my favorite and this guy is fantastic. Academic and accurate without being too serious and dry. Entertaining and funny without being ridiculous. And with the ability to make yourself feel connected to the most unfortunate character in the book. Or is that just me?

A darkly humorous, entertaining read. Following Joshua Jeavons as he descends into a state of madness, searching for his wife who has mysteriously disappeared while he tries to convince the authorities that his is the best plan for managing London's sewage problem, we learn of the various ideas for dispersing effluent, the quack cures suggested for curing cholera, and the theory that cholera is caused by a miasma permeating London's atmosphere rather than by polluted drinking water. Using Mayhew's 'London Labour and the London Poor' as historical background, Kneale paints an authentic portrait of the squalor of London's slums in the mid 19th century. A good story balanced by black humour and well researched history - a perfect combination for me. Recommended.

Set during the Cholera epidemic of the 1840s, It tells the story of Joshua Jeavons who has plans to reform the sewage systems in London - and at the same time investigates the disappearance of his wife. The characters and story are loosely based on real people.

Whilst I didn't enjoy it as much as Kneale's English Passengers it was a great story. I find his characterisation excellent and he is superb at painting a really vivid picture of Victorian London, both of the upper classes and the slum dwellers who live in close proximity in the city.

Any book about life in Victorian London, especially among the poor, is something I like to read. The squalor, the terrible conditions, the illness, death….I cannot say why I enjoy learning about this, except perhaps it helps remind me of how lucky we are in our modern age with sewage treatment and a social welfare net for all.
Sweet Thames is set in the 1849 during a Cholera outbreak. At this point in time the volume of sewage in London was at the tipping point. Enter Joshua Jeavons, who is an ambitious engineer with his personal dream of solving the sewage problems by entering a contest for the best idea. In the meantime Joshua’s wife has mysteriously disappeared and he goes on a mad quest to find her. Within a week a letter from Isabella makes it clear she has left her home of her own free will and Joshua is not to pursue her. His continued obstinate attempts to locate her was something I did not like about Joshua. To say the least his judgement was terrible, and his loyalty misplaced.
I adored the author’s rendition of the language of the street people. Here is a quote, spoken by Jem, a street urchin who has made good by running a pickpocket ring:
"What a friggin’ lark meeting you here, eh?" His manner of speech, too, had altered. he had adopted an important way of uttering phrases in one quick-fire delivery. “Ow’s ya drains then – still runnin’ round them sewers with the baldy bloke, is ya – what you doin’ ‘ere anyways?”
"At least I’ve not resorted to thieving."
Jem was not in the slightest put out. “Per’aps you’ve bin missing out – come up an’ see me rooms, why don’t ya – just round here I lives now – grand place as you’ve never seen with two fireplaces an’ a real chandelier on the ceiling – got me own gal too as is called Sal – almost fifteen she is, that’s a yer older than me an’ she’s got tits like you’d never believe – come up an’ see why don’t ya – ‘ave som’it to eat – look like you need it – what you bin doin’ with yourself – bin livin’ in them sewers of yours or som’it?”
Sanitary conditions were truly terrible in London during this time, due to continued growth of the population and a sewage disposal system which could not keep up. We learn of the complete lack of sewage treatment; it is literally flowing in the streets. We learn of the quackery cures suggested to cure Cholera. At that time the theory was that cholera is caused by a miasma permeating London's atmosphere rather than by polluted drinking water.
The Ghost Map by Steven Johnson, and set one year later in 1850 was a better book if you want to read the details of how the mystery of cholera was finally solved and beaten. It is a semi-biography of John Snow, who definitely proved that Cholera was caused by contaminated water. Sadly, it was many more years before the Establishment adopted this theory and made changes.

This was one of the most interesting books that I read in 2018. It's historical fiction at it's best. The book recreated London of 1849 and how one man does his best to stop cholera from spreading while his home life falls apart, his wife disappearing. It was not only interesting to learn what caused cholera and how he intends to fight it but also to see what happened to his wife. He is forced to turn himself into a detective and to follow any clues he can find to solve both cases.

The book introduced me to some new terms, like effluent. And to find out they had stinky rivers of it flowing through the city! It also introduced the common ideas that people had at the time, like that bad smells caused disease. They had some pretty odd ideas back then as they didn't know any better.

Matthew Kneale tells the story of the 1849 cholera epidemic through the fictional memoir of Joshua Jeavons, and engineer with a plan to tackle the problem of London’s sewage problem.

Jeavons tells the story of his marriage to Isabella, the daughter of his employer and the problems in their relationship leading to the disappearance of Isabella. Jeavons’ search for his missing wife leads him on a dark journey into the underworld of London.

Kneale is an excellent writer and his style and vocabulary reflect the writing style of a mid Victorian autobiography, giving an authentic feel to the novel. The link between his fiction and the events surrounding the cholera epidemic make this a fascinating read.

I have a soft spot for Kneale since his magnificent English Passagers, so I may not be entirely objeective.I can see the story is a little bit loose at times, and the pace is unequal so it kind of sags sometimes. But by making use of Mayhew (very closely as well) it steeps the setting in its history in a very natural way.The main character is well realised, courageous in a way, visionary but also a product of his times and his society.Very, very nice

I really thought I would like this as it ticked all of the boxes for me in terms of Era and subject matter. Unfortunately, I really couldn't connect with the characters at all. I persevered until half way through, but I really didn't care what happened and so I decided I had too many other books to read to continue.

Maybe it's because I was expecting the brilliance of the English Passengers, but I found this book quite disappointing. I like the premise but it just doesn't hang together well - it feels sloppy and poorly plotted, and the ending probably should have been the start of the third act.

An interesting perspective on the Cholera epidemic that led to discovering its link with water. I found the plot slightly clunky, however, and not exactly believable. Still, an interesting insight into some of the more grim aspects of Victorian society. Worth reading.