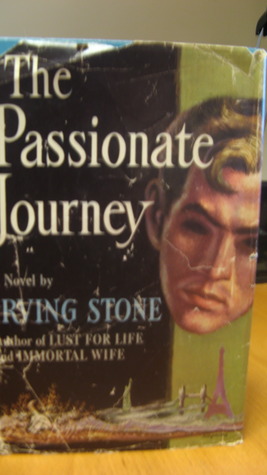 Kansas small town 19 yr old boy artist trying to find his place and ever searching to find himself...his addiction to creating and alcohol are eventually the things he can never master.

Kansas small town 19 yr old boy artist trying to find his place and ever searching to find himself...his addiction to creating and alcohol are eventually the things he can never master.

I have read many Irving Stone titles over the years and usually when I am through with one, I want to learn even more about whatever character was featured. This book was just as enjoyable for the writing as other Stone books have been, but the main character, artist John Noble, earned nothing but my contempt.

He was a spoiled young man who was indulged by his wealthy parents. He was a self-pitying binge drinker, probably had severe manic-depression, and was almost completely self-centered as well as insecure. He was a real mess and not even his talent could redeem him in my eyes, although his friends put up with his bizarre behavior over the years because of his art.

Well, anyway, the book tells the story of this tortured soul, following him from his youth in Wichita Kansas to his painting years in Paris to a creative burst in Brittany and eventually a return to America where he settled on the East Coast.

Creative people seem to have many demons, even in our times. Usually when I read the life stories of artists, composers, or writers, I feel sympathy for their struggles and respect for their endurance and strength of character . But in this case, I was merely disgusted, no matter how much I tried to feel something softer for him.

This is another on my Encore List, and although I have kept most of my Irving Stone collection, I will give this away because I have no desire to ever read it again. As I said, not because it is not well written, but because I simply did not like the main character. At all.

Good read! Made me want to read more of Irving's work. I'm now finishing up The Agony and the Ecstasy.

Biographical novel of the life of John Nobel, an American Post-Impressionist artist taught by Camille Pisarro.

This was a difficult book for me to finish. American artist John Noble led such a depressive life, one that he was unable to conquer. He did manage to leave behind some of his talented work, however. Irving Stone did an amazing job of putting into words the life of turmoil and torment that Noble obviously lived.

The story of one of the first famous American artists. Whenever he found himself unable to produce ,he would go on a drunken spree, eventually killing himself. But he did have a very productive life, producing many paintings, mostly of ships, sailors, and waterfront scenes. He also married very happily and had two children.

At first I thought that this was fiction, then I found out the Stone was writing a novel about a real American painter. It was tough to hear the agonies of John Noble's life, his passionate journey to become the artist he wanted to be. If being an artist is that painful, I would never want to be one. The book should have been called "the passionate and agonizing journey". Also, John Noble was a pitiful example of a husband and father.

Irving Stone has long been one of my favorite authors, but sad to say I thoroughly hated this book. This biographical novel is about a famous painter named John Noble. It was painful to read the life story of a man that I thought of as an idiot, asshole, alcoholic and a total jerk. I also thought Stone got excessively verbose and over wrought in parts of this novel. Read Irving Stone's other novels, they are very good, but skip this book.

If this hadn't been a biographical novel (about John Noble), I may not have finished the book. Stone could have 'novelized' the story a little more to make it more gripping.

I knew nothing about Noble (not even his name), so this is my introduction to an American painter.